Origami artist Ankon Mitra makes you see origami with new eyes, as an art form, not just children’s craft to make boats, birds and aeroplanes. His works in mediums like fabrics, canvas, metal foil, leather, polypropylene, brass and aluminium sheets are a treat to the eyes.


What made you interested in Origami?
I was studying Landscape and Horticulture when a chance conversation with a gardener gave me insight into folding processes in nature. Nature uses folding as a fundamental tool to solve many types of problems. From the formation of the Himalayas, to the coastlines of countries, from human DNA to how leaves gain size in cold countries, folding is everywhere. Cabbage structure to bird flight, sound or light, it’s all folding, folding, folding. When I understood that folding is intrinsic to the very fabric of life around me, I stumbled onto Origami and realized this was the simplest and most immediate way to experience and understand folding. All it takes is a humble sheet of A4 paper pulled out from a printer tray. And then, the possibilities are endless.
When did you realise you wanted to take your Origami art to exhibitions?
I have been folding seriously since 2009. I started yearning to show the possibilities of folding to a larger audience within a year of beginning. Workshops were a natural progression where I could spread Origami love to a larger audience. But workshops had few participants. How would thousands of people get to see and learn the possibilities of Origami and folding? I realized it would be great to start showing my work. I started trying to re-imagine folding as Art. Till then it had been geometry, mathematics, structure, nature and physics to me. Then all of this coalesced at some point and became art. The first show ‘The Folded Garden’ opened to great reviews in Delhi, 2014.The recent solo show ‘Origami Red Origami Gold’ curated by Monica Jain of Art-centrix was very well received. 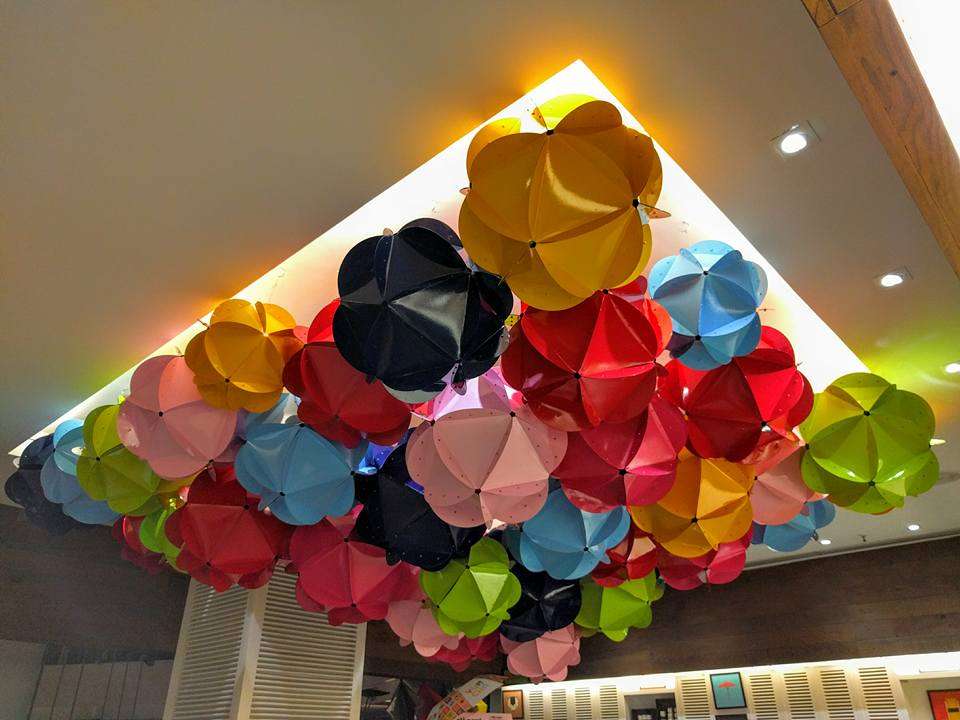 Describe your love for Origami?
Mathematics was always a difficult subject for me in school. But it was my discovery of Origami that made me fall in love with mathematics. I realized our school system is not teaching Maths in the way it should be taught. In Israel they use Origami to teach maths, even higher mathematics. I am not in Education, but I would love to work with mathematics curriculum writers to allow this to happen. Then Calculus and Algebra will be visual and tangible and not just a jumble of symbols and alphabets. I see Origami all around me – from the folded shirt collar to the wrinkles on my grandmother’s skin. It’s all folding and ‘for a reason’, not just for the heck of it. I love Origami. I breathe Origami.
You have experimented with tough materials like aluminium in the current show, how challenging is the process to execute it in Origami?
In the first exhibition in 2014, a lot of people asked how long the artworks in paper would last. I had used German paper and Archival paper and the paper would be good for 30 years or more. But there is a huge psychological problem with paper. It feels flimsy and feels like it will get destroyed easily. We have 200 year old books in the National Archives. They may have yellowed, but they are not going away any time soon. Yet, there is apprehension that paper works will not last.
I started experimenting with other sheet materials – fabrics, canvas, metal foil, leather, polypropylene and eventually brass and aluminium sheets. In the studio we have come to the realization after more than a year of back-breaking work with sheet metals – that any sheet material can be folded, the only requirement is application of proper physics, material technique and the right tools. We are creating our own tools as we go along and try newer and different kinds of creasing and folding in sheet metals. It’s very exhilarating. There are a few people in the world who fold metal to do Origami, but I don’t think there are too many people. It takes immense patience and the results are often failures. So the same piece needs to be folded upto 8-10 times sometimes before we get a perfect piece. Curve folding is even tougher than straight line folding, not because of the strength needed, but because it is very easy to dent the metal in the process. And dents mean a piece is no good and we have to start over. 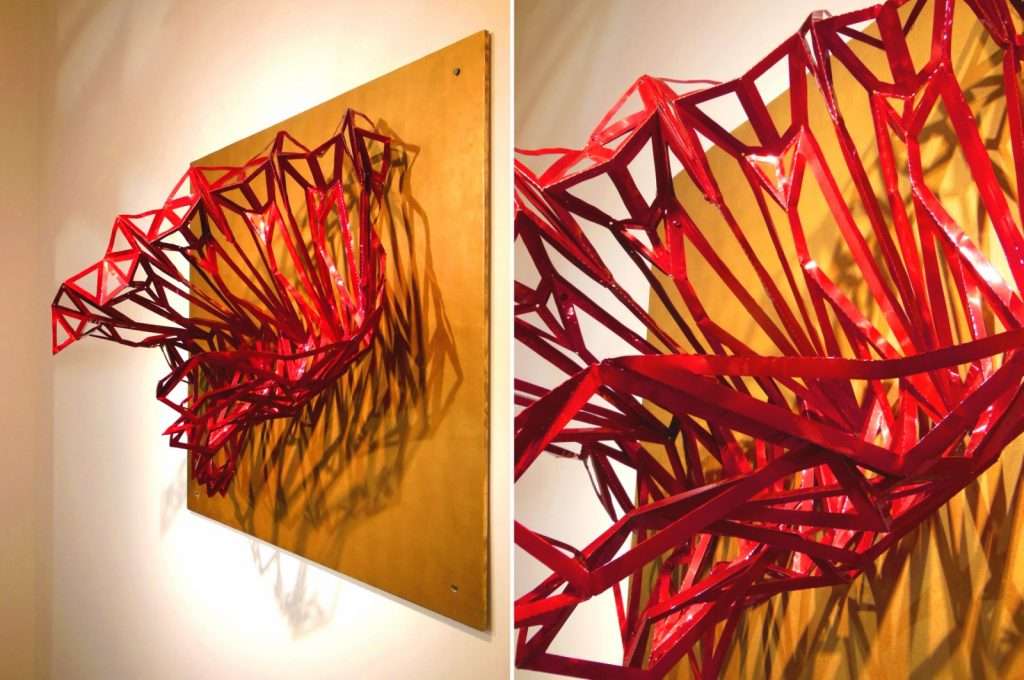 You have derived a term Oritecture, what all does it encompass?
Oritecture is a conjunct word. Oritecture = Origami + Architecture. Architecture is the mother of all the visual arts. Oritecture encompasses all art and architecture that is folded, foldable, or using folding as a principle for coming into being.
How would you describe the practical usage of Origami art in your designs?
We have been building up our technical knowledge of translating origami principles into materials like stone, wood, ceramics, concrete, plastics, leather and metal – materials that are commonly used in spatial design, furniture design, product design and in architecture. We are now poised to take a leap, as prototypes develop and get refined. We have begun to create lighting, furniture, crockery and architectural elements that use Origami principles and aesthetics. This is the vanguard and we are very excited.

You have also involved Tholu Bommalata, shadow puppetry artists in your line of art works. Please explain merging of the two arts together?
With Television, You-Tube and Movie Theatres, Shadow Puppetry performance (Tholu Bommalata) is slowly dying. But these craftspeople use amazing goat hide leather/parchment leather (the same leather that is used on Tablas and Dholaks). It is a transluscent hide, all the hair is cleaned from it and wonder of wonders – it can be folded! As soon as I realized this, I jumped at the opportunity to work with these craftsmen. I went to Nimmalakunta, a village in Andhra Pradesh where they live and work, and developed with them a way to fold the leather and re-imagine their material in terms of lighting – floor, wall, table and ceiling pendant lamps. I thank AHF for this opportunity.
You are also using Kirigami in your designs, please explain?
Kirigami is like Origami, the only difference is Origami allows folding, but does not allow cutting the sheet material, Kirgiami combines cutting with folding. In that sense Kirigami is more versatile as a technique as we can do specific types of cut and fold designs such as slice-form etc. I am using a lot of Kirigami in our work and it adds another dimension to the Origami designs. My latest show had two works – Crystalline Wind and Kirigami Lounge Chair which used Kirigami techniques.

What is your next project?
Currently the studio is busy folding lots of Origami Objects and creating Modular Origami Installations for the Yum Yum Cha Restaurant, at Khan Market, New Delhi – the third in a chain of Origami themed Pan-Asian restaurants that have done exceedingly well and are much loved by people.

Lahore Biennale director on the inaugural edition and challenges it...

Who is afraid of slowdown? IAF director Jagdip...

One must have larger vision as a curator,...

I now find myself looking back and looking...

Serendipity award grantee to document plays of a...

Video of the Week

No images found!
Try some other hashtag or username