Art is not only a source of visual pleasure but rather it can persuade the masses to look into the harsh realities of life as well. Through visual imagery and iconography, symbolism and colours, art communicates impactful messages very tastefully and subtly satires on the socio-political-economic life around us. It’s one of the most influential, just and unadulterated mediums which is so pure in its form that the malice, crime and misanthropic deeds, which blemish the society can be easily seen through the artistry. Though it would take time to shaken the sleepy institutions and corrupt organizations, but the creativity of art can play a crucial role in invoking an upsurge against the malevolence.
Art on different planes
Art cannot be contained it can only be expressed. This medium should not be restricted to galleries, museums, journals rather it should spread like a wave initiating revolutionary change in the current times. Many artists don’t create for a specific audience, but they create for the humanity and so every plane becomes their canvas. Unsanctioned art is exhibited through various mediums—including tags, pieces, sculpture, stenciling, sticker art, art intervention, flash mobs, yarn bombing, and street installations, cartoons, films etc. Unconstrained by form, medium, or message, the art form offers creative freedom and while artists have varied motivations behind what drives their work, graffiti and street art tend to carry strong subversive messages for activism. 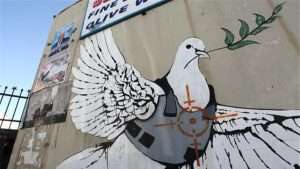 Graffitti/Street art
The accessibility of the art form contributes to its power, and, as stated by English street artist Banksy, it is “graffiti [that] ultimately wins out because it becomes part of your city, it’s a tool. A wall is a very big weapon,” he says. It’s one of the nastiest things you can hit someone with.” People consume information as it is available to them, and it is street art that is utilized as a means of transmitting messages that help to supplement the availability of information and ideas. Art in the form of street art shows outcry of the oppressed group like we could see Palestinians retaliating against Israeli forces through their strong,   touching pictorial messages which they draw on the walls separating them and Israelis; Indian artists painted ‘Bharat Mata’ during the freedom struggle movement and the imagery of that figure united thousands of Indians against the colonizers. Blotches of color and the curvature of thick black lines speak to us as the poetry of an artist’s time and illustrate the cultural climate. Their messages, too loud to be ignored, make looking down while walking nearly impossible and instead force us to lift our eyes and observe our surroundings. 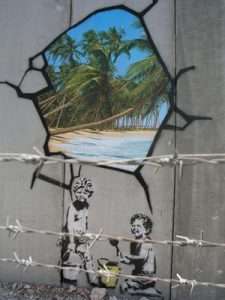 (A wall art by Bansky in Palestine)

Film/documentaries/virtual art
Moving characters and animated figures in films also catalogue a wide range of themes like anti-war, anti-capitalism, anarchism, hypocrisy, greed, poverty, and despair. Both politically and ideologically embedded, virtual art also portrays the denouncement of the insincerity and falseness of current society. Creative impulse of artists makes them shoot even in one of the most violent and unfavorable scenarios to bring out the truth and the faces of those who cause unrest in the world. For instance the documentary film ‘The Noise of Cairo: The Artists behind the Egyptian Revolution’ sheds light on the silenced masses of Egypt who found their voices through the vehicle of street art. The Revolution has sparked a ‘New Egypt’ of sorts where, speaking freely without fear, people are beginning to communicate new ideas. There is a new life and a new expression in Egypt, in which art plays a vital part in it. 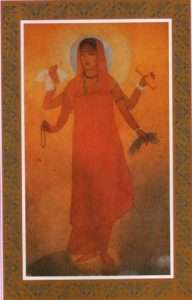 Painting and sculpture
A painting is the imagery of the artist’s mind and a reflection of it’s times. Painters explore  new forms, characters, symbols and abstractions to bring out the metaphorical meanings in their artworks with which they communicate the ills of society and demand change in the corrupt module. Paintings and sculpture exhibit emotions of the suffering society and hence is one of the most altruistic ways of crushing misanthropic views. “Light Before Dawn: Unofficial Chinese Art 1974 to 1985″  is one of those unusual exhibition which brings together the works of 22 Chinese artists who quietly banded together during a repressive time. These artists shared techniques and forged a solidarity that helped them to outfox the authorities. Their art was a rebellion against “the pattern of brutality, narrow-mindedness, hypocrisy, and irrationality” institutionalized during the Cultural Revolution, write Julia Andrews and Kuiyi Shen, the show’s curators, in a moving forward to the catalogue.
In short, the art form is a power tool for inspiring, energising, generating morale, and raising the spirits of its public. It is most “pronounced at times of crisis, war, [and] revolution”. Violence, brutality or bloodshed leads to unrest while art is the most beautiful, peaceful and humane way to rebel creatively.