Mohan Rakesh’s Ashad Ka Ek Din is an actor’s paradise and a space for audience to think upon. Bapi Bose’s adaptation of the text written in 1958 aims at grabbing audience’s attention along the same lines. His style of breaking away from conformities asserts itself giving his installation of Rakesh’s dialogue the mystical edge it already possesses. Circle Theatre Company staged Ashad Ka Ek Din, a modern classic of Indian theatre, recently in the capital.
The play is centered on the life of the great Sanskrit poet Kalidasa and his love for Mallika, a girl living in a village on the foothills of Himalaya. Rakesh’s original text opens with sounds of thunder and rain, enticing a dialogue between Mallika and her aging mother Ambika. It evokes a sense of monsoon. Ambika’s character — a representation of maturity and decay —encapsulates all phases of a life spent in anticipation of greater happiness.
Kalidasa is soon confounded when the royal court of Ujjayini invites him to become a poet of the state. Mallika puts herself in hardship and encourages her lover to go in search of greater things. ‘Ashad’, the fourth month in the Hindu lunar calendar marks the day when she puts her love for the poet in jeopardy. Her suffering increases as her mother gradually withers away due to illness and old age.
His instrumentation of minor roles in crucial times creates several layers to the original plot. The director makes sure that the comic interlude comes at the most unexpected times. Using the roundness of the minor characters such as that of the two famous dancers of Ujjayini and Ambika’s friendly neighbors Matul and Vilom this play manages to grip the underlining life of the original text. 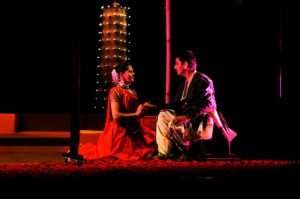 The deed that is done between two poets, Vilom and Kalidasa is of competitiveness. In a feud between two aspiring poets of the same age in history, what reflects best on stage is the debate of man against himself and the love between a simple girl and a self-centered artist.
Use of popular song recordings and dialogues spoken from the wings of the theatre contribute heavily to the aesthetics of the play only to be eventually shattered by Rakesh’s own indigenous spite for the modern people. Kalidasa marries a sophisticated noblewoman, Priyangumanjari, while he is away on state duties. He even goes to Kashmir as a state-sponsored poet.
Rakesh’s text shows an erroneous Kalidasa returning to Mallika with expectation, but it is not hinted here. Rather the show is stolen by Vilom who has married her. Kalidasa’s nemesis Vilom and his muse parent a daughter in the last act and perhaps here lies the heroic flaw of Bose’s protagonist. Kalidasa is considered to be the greatest poet and dramatist of Sanskrit language but he is shown as an insensitive person.
Ashad Ka Ek Din is considered by many to be the first modern Hindi play. This adaptation certainly makes the divide between the ancient and the modern elements crystal clear by provoking the audience to resist any instinctual urges. In the final scene many Mallikas cross the stage and walk to the audience with little babies in their arms asking whether Kalidasa’s deeds were morally correct. It remains a play of sentiments and desires but perhaps exaggeratedly so. This adaptation isn’t short of music and dancing, these have been significant in the making up of contemporary Indian theatre. Performing dramatic literature while at the same time understanding its relevance with today’s time can sometimes confuse the audience and that is where all of its complexity lies. The play swings amiss of the notion of time but it makes up for it in scenery and technique. Ashad Ka Ek Din is a classic that shall bring out the best in an actor and it is also an ongoing process of wit grappling with audiences’ habit to realism.