Bonding beyond borders: Residency at Brijrama was all about camaraderie and respect

Can perception be based on regions? As a concept you’d straight away disagree. But when you look closely at the canvasses spread out before you, you rethink. And wonder. It was just one of the impressions that flitted in our minds when we traversed through the final art works put on display by the participating artists. Something was distinctly different and yet similar in the series before us. This was no city event but the culmination of a week-long association between artists who belonged to three SAARC nations, namely India, Nepal and Bangladesh. The venue was a beautiful 200 year old heritage property (now turned hotel) by the Holy River Ganga, called Brijrama Palace, in Varanasi. 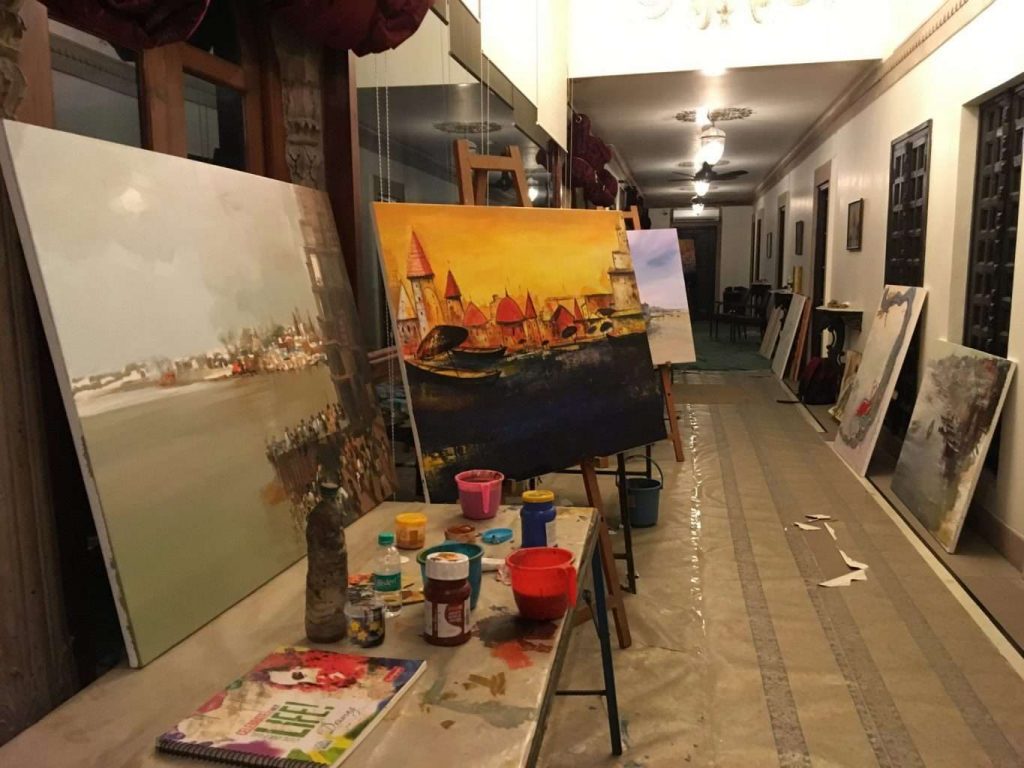 Brought together as an endeavour to promote cultural and traditional exchange through the medium of art and culture by Sandhya Parmar of Art Beyond Borders, the larger idea behind the collaboration was to create a platform to establish meaningful visual and social connections beyond geographic, social, or cultural borders. After all, only interactions and dialogue can set base for a healthy relationship.
Meaningful engagement was what the 16 artists from the three SAARC countries formed as they shared their experiences, impressions and techniques with each other like one happy family. They soaked in the surrounds, captured the mood and let free the child in them before transferring all they had gathered onto their canvasses. Techniques defined their style, colours their training – it was interesting to see how the same city evoked so many emotions in different people and yet they happily shared their knowledge store with the younger members of the group. Patiently, they studied the techniques of the others – some guided the others and the other sought guidance. And bonds were forged.
“Looking at all of them gives me immense satisfaction,” Sandhya shared during the in-between times. Packed schedules had everyone on their toes. Sitting out on the terrace on our first night at Brijrama Palace, Sandhya shared her experiences from the last year’s residency in Lucknow and the road they had covered. “The first residency only had artists from India and Bangladesh. This year we have added Nepal and also brought in an element of culture with a classical music performance by Nashid Kamal from Bangladesh and Kathak performance by Astha Dixit. Our aim is to make it a truly seamless event,” she shared.
Added participating artist, Vinita Karim: “There is so much learning in shared experiences. In the end everybody is like one big family.” An Indian married to and settled in Bangladesh, Karim’s works captured the radiance of the ghats.
“It is so interesting to note how each artist perceives the same place differently,” shared Sandhya. “You also notice the style from where they come from, or the school to which they belong to, at play,” she added. For instance, if colourplay was predominant in the works of artists from Nepal, Indian artists seemed to have captured the figurative impressions that are largely associated with the daily chores along the ghats and the city. The Bangladeshi artists brought out the softer, surreal side to the River Ganga and her ghats. The dreamy, sensitive portrayal of the ancient city made it clear that like the city, their works too transcend time.
“And the learning is immense,” shared Radhika Surana, participating Indian artist, based out of Gurgaon. “The entire experience is so overwhelming. The choice of destination to that of the artists, the connect we ended up forging makes it appear as if we all knew each other from before!” she laughed. But whatever the style or nationality, a rare commitment was evident in each of the artists. And each of them turned an honest body of work at the end of the residency.
“India is a very interesting market and such opportunities only pave ways for long and fruitful associations,” shared    N B Gurung from Nepal and similar thoughts were echoed by fellow artists from his country as well as Bangladesh.
Said Sandhya: “This is exactly what we are striving to do. Out effort is create this opportunity for all artists alike, and from all the SAARC countries. In the last two years, we have managed to reach out to two, we hope we would be able to connect with all seven very soon. There is nothing more powerful than love spread and peace attained through sharing and exchange of creative spaces”.
Short breaks like excursions to the city, a visit to Sarnath and an Art of Living session, added relief to the event. After all, what fun is a visit to Banaras, if you have not shopped for Banarasi sarees and enjoyed its street food. Till next year, when Art beyond Borders picks another amazing location and with a bigger attendance.