Dance has been a part of her upbringing right from the childhood. Her mother and her first Bharatanatyam Guru Smt. Kamalini Dutt has learnt several dance forms and performed Bharatanatyam till her late 30s. Due to a fire accident, her performing career stopped in the 80s and she went on to specialize in producing programmes on dance and music for Doordarshan. Purva says she not only taught her Bharatanatyam in her early childhood (studied dance under Smt. Radhika Shurajit for a decade) but was also instrumental in her foray into Vilasini Natyam.
Purva Dhanashree has been trained by two Gurus in Bharatanatyam who represent two banis (Tanjavur and Kalakshetra). She shifted to Chennai for three years for her graduation. After returning to Delhi Smt. Kamalini Dutt took her to Guru Swapnasundari for learning abhinaya.
Swapna Akka (as fondly called by her students) first saw her Bharatanatyam and then decided to take her as a student. But she told that her approach to Abhinaya has changed a lot after practicing Vilasini Natyam and Purva will have to learn this style to understand what that approach is. That is how she started learning Vilasini Natyam – a dance style she had never seen or even heard about 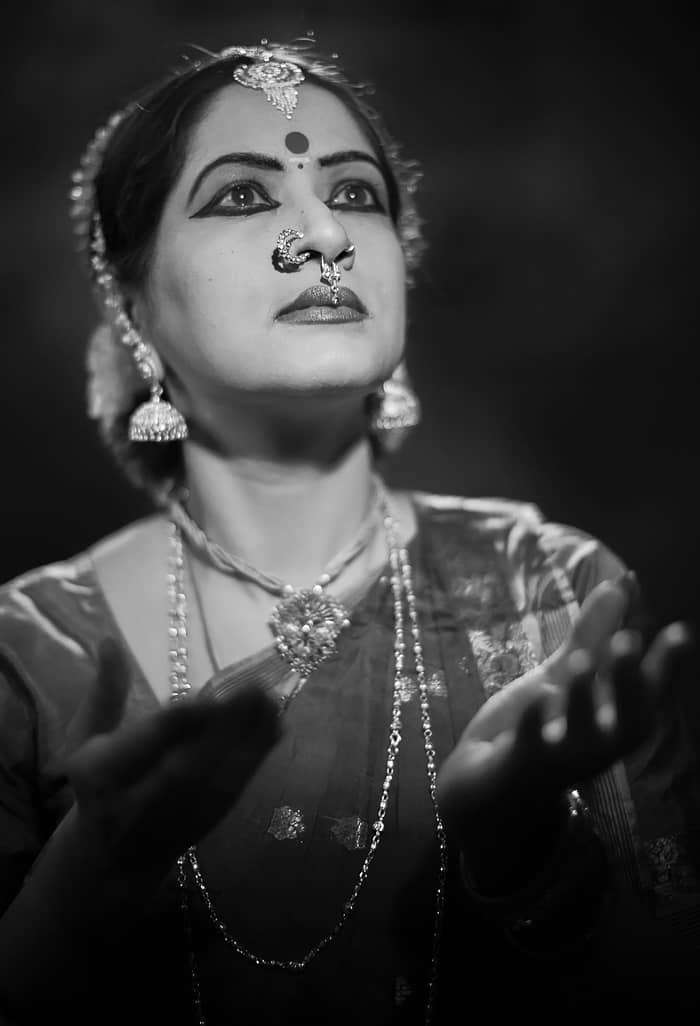 Where does Vilasini Natyam finds its origin and what are the keycompositions of its repertoire ?
It is a Devadasi art form. It flourished in the temples, courts and public arena throughout Telugu speaking regions, which apart from Andhra Pradesh and Telangana spread to parts of present Tamil Nadu, Karnataka and Orissa. The mythological roots trace its lineage back to the celestial nymphs. In Telegu regions temple dancing was patronized by Kakatiya rulers, the Chalukyas, the Vijayanagaram rulers, Madura and Tanjavur Nayaka rulers.
Dance being an integral part of human expression found its sacred place in the temples as rituals. The dancer was equally venerated as the priest of the temple as she along with him performed all the rituals from morning till night through dance and music. The daily rituals were called Nitya sevas starting from Meylukolupu ( waking up the Lord ), Churnika( floral offering) followed by Pallavi ( abstract dance performed during his morning repast ), Baliharan ( offering food to guardians of the eight directions ), Pallaki Seva ( dancing while the Utsava Murti is taken out for a procession ), Kumbha Harati ( warding off evil energies from the God when he returns to the temple ), Hetcharika ( warning song to the negative energies which are believed to have surrounded the temple in the absence of the God ) Lalee ( putting God to sleep). 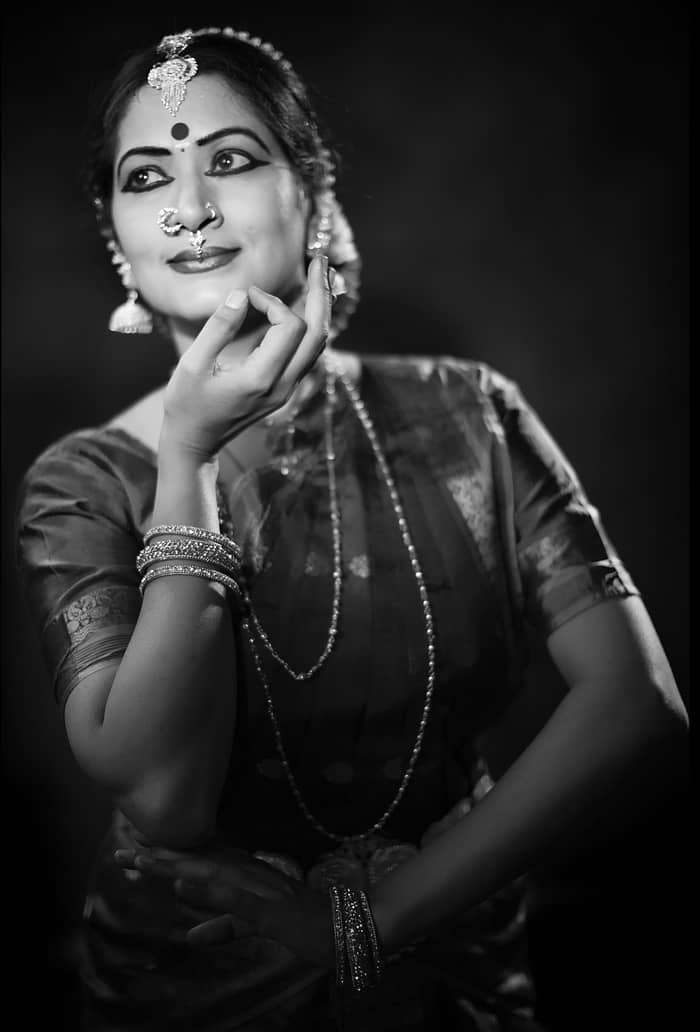 The special rituals during the festivals or on special occasions were called  Naimitya sevas. The hereditary temple dancers who were dedicated to the temples at an early age were trained in not only in dance but also music, scriptures, mythology, literature and aesthetics. They were the link between the devotees and the God. Through dance they carried the prayers of the people to the divine. Their relationship with the deity was multi-dimensional. The devadasi was the God’s servant, but she was also Nityasumangali – eternally auspicious as she was ‘married’ to the God.
Temples were patronized by the royalty and there were devadasis who danced for the aesthetic pleasure of the king and intellectuals present in his court. The purpose was to entertain the royalty through dance compositions which were rich in musical and lyrical content. The dancer did elaborate expositions on the lyrics, sometimes expanding on just a single word thereby engaging with the audience at various levels of aesthetics. The repertoire consisted of Salaam Daruvu, Sabdam, Varnams, Swarajati, Jatiswaram, Tillana.
Devadasis also performed for the closed gatherings of zamindars and connoisseurs. Such a concert was called meyzuvani. They did detailed abhinaya (interpretation through expression) for Padams and Javalis. In Padams the dancer took one phrase or one word and elaborated on it. The idea was to develop a dialogue between the audience and the literature thereby elevating the levels of intellect and aesthetics. 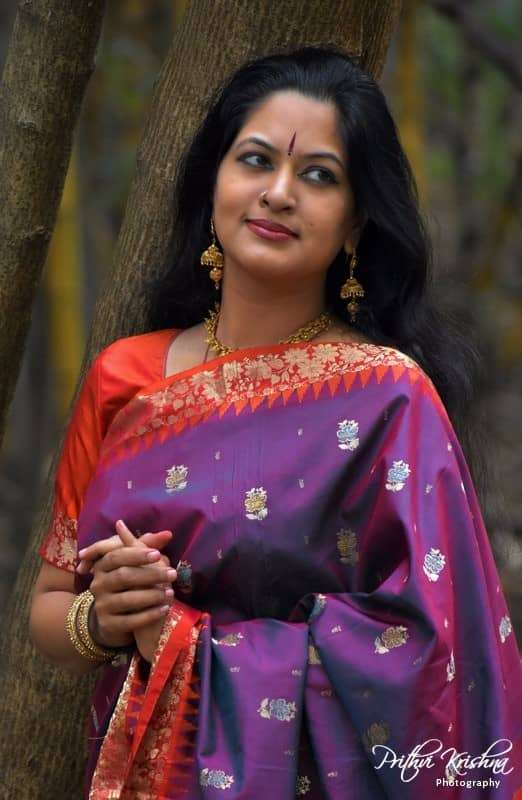 Devadasi also had the responsibility to educate the public – especially those sections of the society which did not have access to knowledge. She through a dance drama format educated people about life and spirituality. In these Bhagavatams – both Parijatam (story of Krishna and Satyabhama) and Golla Kalaapam she played the character of either Satyabhama or Golabhama. Bhamakalaapam takes the audience through the labyrinth of different human emotions finally culminating in the union of Krishna and Satyabhama and in Golla Kalaapam the dancer as Golla (milkmaid) dialogues with the priest on various issues concerning life and death.

How is the dance technically different or closer to other dance forms like Bharatanatyam, Odissi?
Like Bharatanatyam and Odissi, Vilasini Natyam has its own unique body of fundamental movements. The postures are different. Way of using a hand gesture is unique. The feet movements are distinct. No Bharatanatyam dancer can do these movements without going through the initial training in the body technique. I am a Bharatanatyam dancer, but I had to learn all the fundamental movements of Vilasini Natyam for two years. The gaits in Vilasini Natyam are different than those in Bharatanatyam. The very basic posture of Natyarambha is different.
Interestingly it is closer to the Odissi Natyarambha. But we do not use Chauk. Neither do we use Tribhanga but there are many feet movements and upper torso movements which are similar to Odissi as the style I do was practiced in Northern parts of Telugu speaking areas which were closer to the present-day Orissa. If we study the body kinetics of all the devadasi art forms we will find many similarities and at the same time there are regional differences. 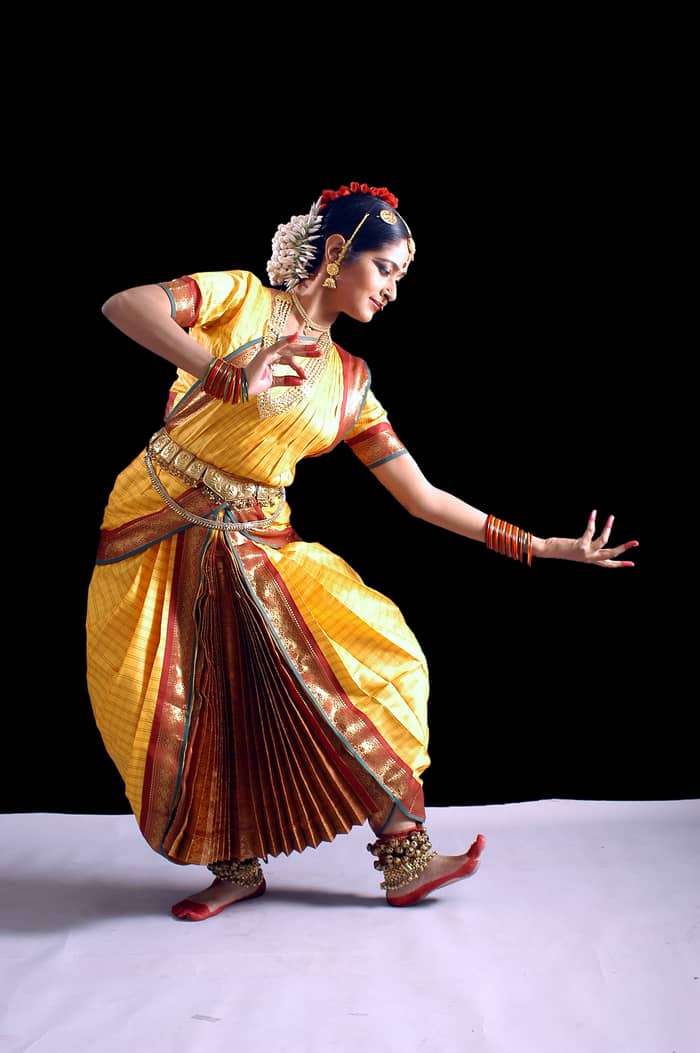 Tell us about your experience learning Vilasini under the legendary dancer Guru Swapnasundari
The path was filled with thorns and petals. She is a brilliant artiste and a demanding Guru. We worked very intensely and for me the experience was enriching challenging but also exhausting. Akka taught me unique and rare compositions which I will cherish for life. While Nritta pieces were very interesting in terms of body kinetics, the abhinaya pieces opened a whole new world of meanings, images, symbols. All of us sat in awe as she interpreted a line many times hyperlinking one idea with the other: the twitch of a facial muscle, the
bend of head, graceful wrist movement, and the dance of eyebrows. No matter how many times I attempted her bhava I could not get what she did and that used to be very frustrating. Pages and pages of notes, videos nothing helped as dance is all about how one takes the idea inside and brings it out as her own unique expression. I will always cherish those years of learning and will always draw energy from the memories while creating new compositions or reworking the older pieces.
Reception of Vilasini Natyam amongst the current audience and its future
I do not know what the future has for Vilasini Natyam unless it is institutionalized and supported by the Government at centre and state levels and recognized as a separate dance from like Bharatanatyam. I am deeply grateful to God for the past and the present. Talking about my own individual journey – it has been challenging, interesting, enjoyable, frustrating yet filled with hope, love and encouragement. My mother, Kamalini Dutt, has been my greatest strength. When she was with Doordarshan she produced a 12-episode series on Vilasini Natyam and also made a special documentary on the Ranganatha Swamy temple of Rangabagh, Hyderabad where temple rituals are performed during the Brahmotsava. 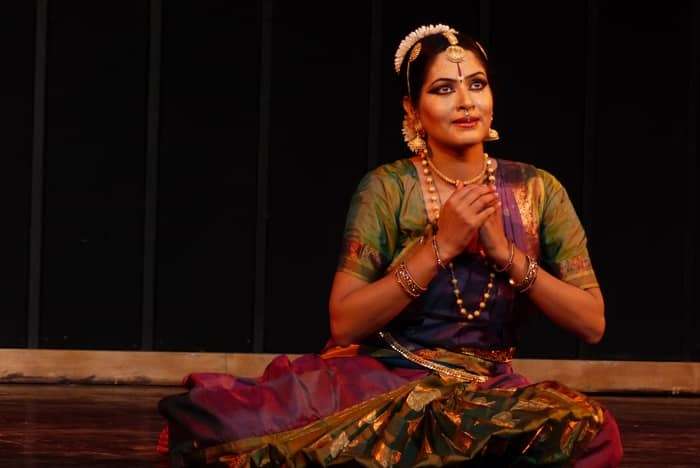 Central Sangeet Natak Akademi has supported this dance form in many ways. Partly funding Guru Swapnasundari’s research, documenting the work of the senior devadasis like Maddula Lakshminarayana, bestowing the Ustad Bismillah khan Puraskar on me, featuring Vilasini Natyam in few of its festivals. Sahitya Kala Parishad gave me scholarship in Vilasini Natyam in 2002 and has featured this dance from in its festivals. ICCR presented this style in its Horizon series in Hyderabad. Doordarshan has recorded all the artistes of Vilasini Natyam in Delhi, Chennai and Hyderabad. Many senior dance Gurus have presented this art in their festivals. It has also been featured in some of the major festivals of India. SPIC MACAY has organized many circuits across the country in past 4-5 years. Most of the senior critics have written on this style.
I am blessed to work with so many musicians across the country who have performed and recorded with me. I am also grateful to the photographers who have captured the subtlety, grace and power of this style. Yes, there have been criticisms and not everyone likes this dance style. People need time to understand a new art form. And they can always have their own likes and dislikes about performers. That is true about every dance form. I hope there are more opportunities for this style so that it is seen by people across the country.