Who is Van Eyck?
Jan Van Eyck (B.C. 1390-9th July 1441) was a painter in Early Netherland who happened to be one of the most significant Northern Renaissance artists existing in the 15th century. Paintings like the Ghent Altarpiece and 20 other surviving paintings are ascribed to him. He painted secular and religious subject matters. He also involved himself in commissioned portraits, donor portraits and large and portable altarpieces. 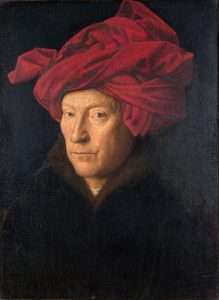 How do his paintings depict Christianity?
The artist from the Northern Renaissance period who best understood the potential of iconography in painting was Jan Van Eyck. This was evident in his Annunciation, which is a masterpiece of art and one of the most important paintings of Northern Renaissance.
Symbolism is integrated into his work in the fact that his paintings refer to the Trinity, the Old and the New Testament along with events leading to the birth of Jesus Christ.

Symbolic significance was paid heed to
It is safe to say that Van Eyck depicted the overlapping of the peacock feathers with Gabriel’s own wings. It is said that Van Eyck depicted them like this for a reason and that the depiction carried symbolic significance. As religious thought dominated the Northern Renaissance period, artists emphasized religious scenes and persons in their works. Jan Van Eyck’s Christ Enthroned on the Ghent Altarpiece shows Christ resting on a cathedra with a rainbow shaped backrest.
Rainbows connection in Eyck’s art 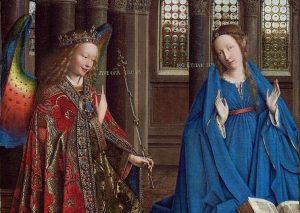 In Van Eyck’s paintings, the rainbow serves as a bridge between the Old and the New Testament and it also points to two Biblical events that the earth will be cleansed, the evil lost and the righteous saved. These symbols show Christ’s role as the savior. By showing this symbol on Gabriel’s wings, Van Eyck makes additional reference to Gabriel’s role as an intercessor of the world while the deluge happened. Here it is pertinent to point out that the only angels Van Eyck painted with rainbow colors are those featured in paintings referring to the infant Christ. In the paintings Virgin and Christ with Chancellor Rolin or in Dresden Triptych the angel’s wings are painted in rainbow colors. In other paintings by the same artist and those featuring angels, there is no reference of infant Christ. Here the angels wings remain multicolored but don’t have the same rainbow coloring found in the paintings depicting Christ as a child. Van Eyck used the rainbow colors to stress on Christ’s future role as a redeemer and a judge.
Conclusion
Thus, we have been introduced to the symbolic imagery used by Van Eyck in his paintings which related to Christianity and its angels.