Self-portraiture is a long established form of art dating from Ancient Egypt. Since then, many of the Old Masters as well as modern artists have reproduced their own image in a variety of media, for a variety of artistic, commercial and self-promotional motives. Indeed, the history of art has witnessed several examples of artists executing repetitive self-portraits, sometimes for emotional reasons.
In fine art, a portrait can be a sculpture, a painting, a form of photography or any other representation of a person, in which the face is the main theme. Traditional easel-type portraits usually depict the sitter head-and-shoulders, half-length, or full-body. There are several varieties of portraits, including: the traditional portrait of an individual, a group portrait, or a self portrait. In most cases, the picture is specially composed in order to portray the character and unique attributes of the subject. Recent examples of this compulsive self-portrait painting include works by the Post-Impressionist Vincent Van Gogh (1853-90), the German Expressionist draughtsman and short-lived prodigy Egon Schiele (1890-1918), and the Mexican painter Frida Kahlo (1907-54).

The next great pivotal moment in the history of amateur photography – and perhaps photography in general – was the emergence of digital photography. Early digital cameras were available on the consumer market in the early 1990s, but it was not until technical improvements and a drop in prices over the next decade that digital photography had replaced older technologies. In 2002 more digital cameras were sold than film cameras, and Kodak, a giant in American industry for much of the 20th century, filed for bankruptcy in 2012. With the advancement in technology the art of portraiture which was on canvas later turned to a celluloid then turning to photographic film and digital media. Now the word selfie has come up in the 21st century where pe

ople can click their images from front camera and the widespread trend of posting selfies has made this word secure the title of word of the year in 2013.
But how does selfie evolved as an art of self portraiture? In a recent workshop by held at India Habitat Centre, noted photographer, designer, and filmmaker Parthiv Shah helped the attendees understand the conceptual meaning by which selfie could aesthetically serve as a medium of self –expression. He said, “the age of selfie may be the result of unprecedented changes in technology and the rise of social media but it owes tremendously to the old-age genre of self-portrait. The long history of self portraiture seems to have begun during the middle ages with painting. For some it was meant to symbolize the primacy of authorship, for others it represented a case of self- consciousness and personal scrutiny, perhaps also a way to document their lives.”
Involving the participants directly in the proceedings, he made everyone click their self portraits which were then 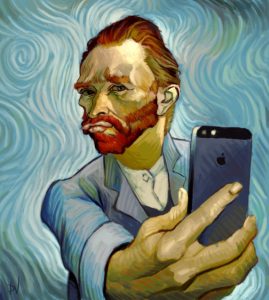 discussed at length at the workshop. During this discussion, he touched upon the important aspects of photography like lens, perspective, design elements and how they are applicable in self portraits. Emphasizing on the importance of framing he said,’’ we need framing and framing means eliminating things. To capture a single thing we eliminate multiple things, and this is an important part in image making whether it is a selfie or any other picture.” By the end of workshop one learnt the art of conceptualizing a selfie into a self portrait.
What I would take back home is a wonderful experience where I measured the long history of self portraiture. Even the masters of art like Picasso, Michelangelo and Van Gogh couldn’t decipher how much their art have been evolved!