Contemporary Dutch photographer Bas Meeuws exhibited for the first time in India the traditional Dutch genre of flower painting in his exhibition ‘Spring in wintertime’. Showcasing a selection of 43 photographs, the exhibition brought together new and previously unseen Indian work produced in conversation with Tasveer, along with a selection of Meeuws’ early floral still-lifes inspired by the Dutch Golden Age tradition of ‘flower painting’. 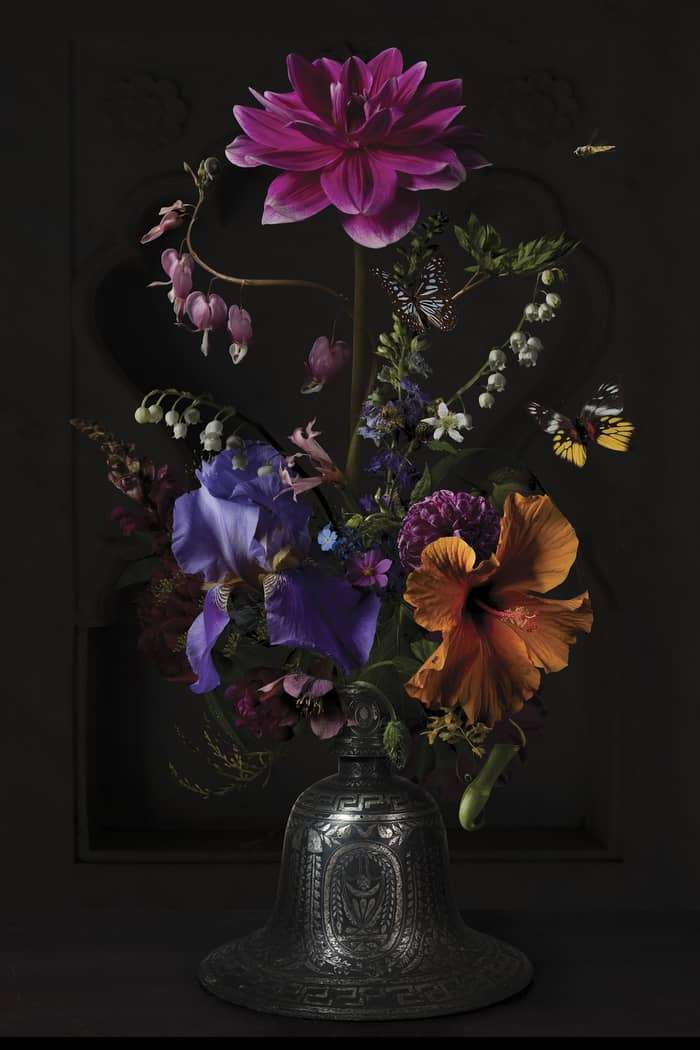 What are the works you showcased at ‘Spring in wintertime’ in India?
‘Spring in the wintertime’ was a selection of 43 Still life’s I made in 2010, 2011, 2012, 2013, 2015 and 2017. It shows Dutch works (still life’s and 9 small Tulip books/single flowers) and India inspired works called Mughal Still Life’s and Mughal Botanicals (2x 9 small Botanical works). I’ve been working on the Mughal series after meeting Mr Abhishek Poddar from Tasveer in 2014. I’ve been doing photography in India since 2015. I shot some tropical flowers in Bangalore Botanical Garden and I have been able to shoot antiques that could function as vases in my works. 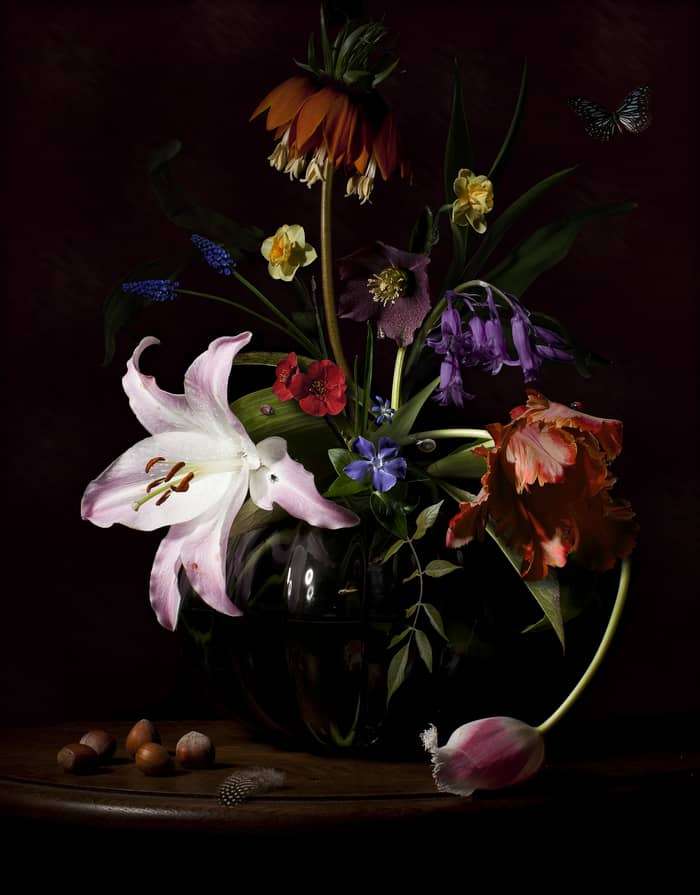 Bas Meeuws Untitled (#47), 2011 C- Print on Dibond Behind Acrylic Courtesy tasveer
What inspired you to Dutch tradition of flower painting? How did it all happen, from a physiotherapist to a digital florist?
Flowers are beautiful! They represent the circle of life for me as well as the short time of real beauty – Carpe Diem. I want people to experience the explicit awe that people in the 17th Century in The Netherlands must have experienced during their first encounter with such beautiful exotic flowers. In 17th Century the Dutch and Flemmish flower painters were world famous.
I wanted to show that the genre is not dead yet, by reviving it to this time, by reviving the medium into digital photography and image processing. I live in the city of Eindhoven, The Netherlands with my wife and two children. I’m a trained physiotherapist while doing photography more as a hobby and passion. While improving my skills, I started dreaming about ‘doing more’ with my passion. As an artist I’m self taught. I started doing these still life’s back in 2010. In 2011, I started exhibiting my works through the Netherlands in galleries and art fairs. Since 2014, my international career started with shows in Taiwan, followed by the introduction in India by Tasveer in 2015 and some international art fairs (Basel, Miami, NYC, LA, Delhi, Shanghai) in 2016 and 2017. My work is in private and public collections such as Westfries Museum, VU-university H ostpital, Amstelveen City Hall. 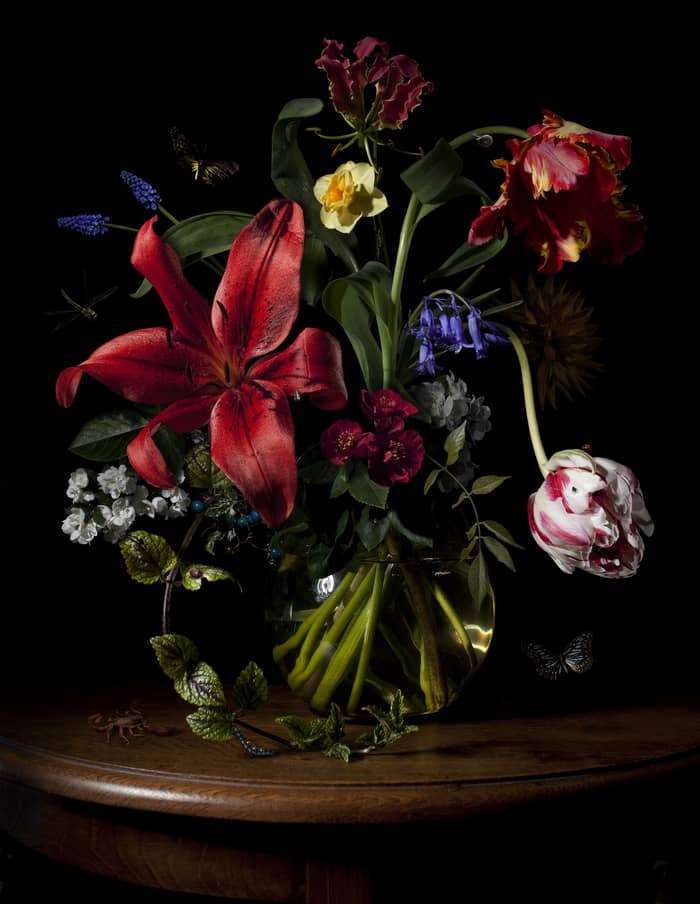 Bas Meeuws Untitled (#47), 2011 C- Print on Dibond Behind Acrylic Courtesy tasveer
Please take us through the process of digital flower painting.
I have been shooting single flowers since March 2010. I take single flowers and shoot them in front of a black backdrop. I’m using studio lighting. I take multiple photos in different angles, in full light and some more in the shadows. I take photos indifferent stages of bloom. After shooting it takes a couple of hours to one or more days to process them into useable images. I’ve been doing the same with insects and antique pottery. In this way I’ve been building a database with over 13,000 images.
When starting a flower piece, it starts with the choice of the vase and table. Then I put my first flower in, most of the time it’s the one on top. From that point on it’s a process of constructing the piece flower by flower until everything matches according to my standards. I can play with proportions, colours, even change the way a stem is bending. I have full control. Everything in my works is there with a reason and not by accident. When the composition basis is ready, the cleaning process starts (removing all selection pixels/remaining). In this phase I can adjust every little detail, sometimes remove or add something small or funny. The last stage is the lighting/shadow stage. Because I shoot basically everything in the same light I have to adjust a lot of shadows, contrast. Ever y stage of the process is challenging and gives satisfaction. The construction because I make something out of nothing, the cleaning process because of the big improvement and the ‘melting together’ of all separate layers and the adjustments of the lights and shadows makes it all complete. It takes roughly 50-200 hours to complete a single flower piece. Single flower pieces take less time and sometimes it takes up to 450 hours of labour to finish. 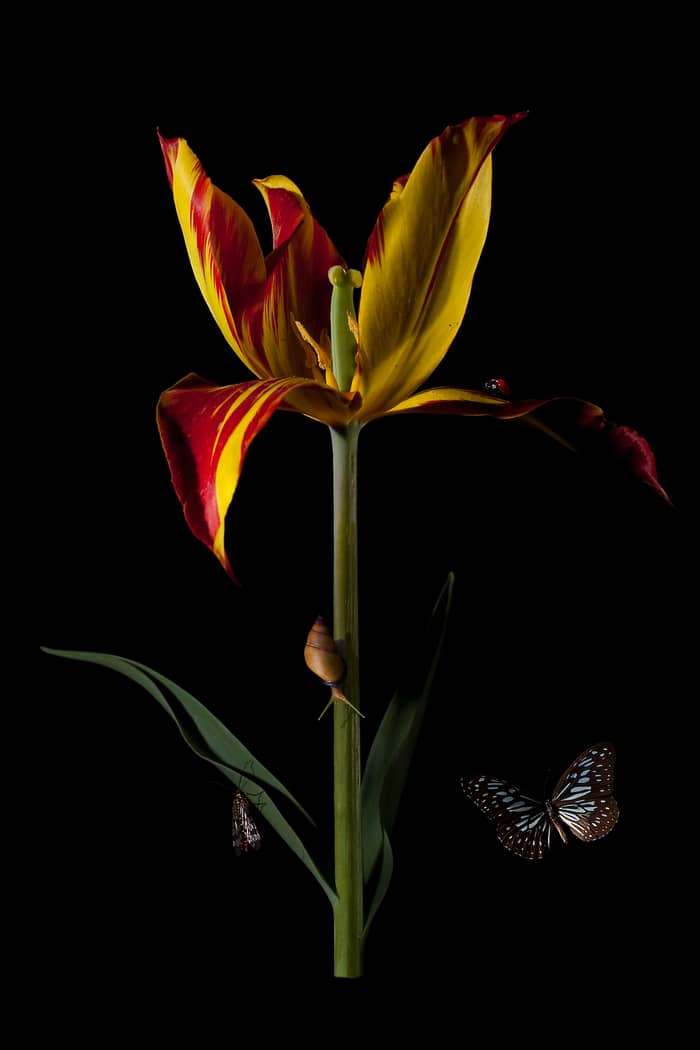 Bas Meeuws Tulip (#04), 2012 C- Print on Dibond Behind Acrylic Courtesy tasveer
During your visit to India, you researched on Mughal flower arrangement. How different is it from Dutch style. What are the other styles that you have explored?
I’ve been studying the Dutch and Flemish style very intensively in the early years. I’ve started to develop my own style since then. During my visit to India in 2015, I started researching Mughal flower arrangement which sometimes do not differ that much from the Dutch, and sometimes differ a lot being more symmetrical and almost graphic. Since last year I’m studying more oriental, Far East, Japanese, Chinese arrangement styles and started with a series of photographical series of hommage to Sanyu (chinese painter 1901-1966). I have been shooting more tropical flowers last year and find it more challenging to work with these at the moment. I want to come back to India a bit earlier in the season because I want to shoot Indian roses too. When I was her last month (May) they were all gone. 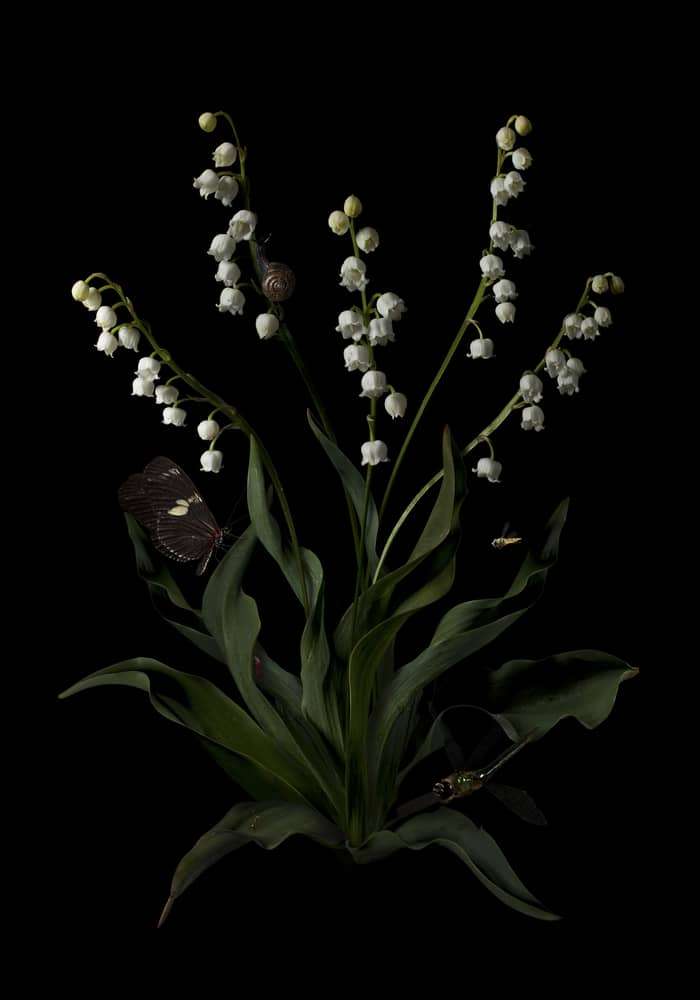 Bas Meeuws Mughal Botanical (#13), 2017 C- Print on Dibond Behind Acrylic Courtesy tasveer
Please share insights on the Muiderslot project.
Muiderslot is a special piece. It was a commissioned project. The goal was to create a masterpiece by using only material from the castle itself. The gardens have been restored twenty years ago. I have been following the stages of bloom of these gardens for a whole year and took thousands of images of flowers, berries, fruits, vegetables, insects, the interior, details of painting displayed in the castle and more. This pieces called: ‘De lieve Lent by wintertijdt’ (Old Dutch for ‘The sweet Spring in wintertime’) will by past of the collection of Rijksmuseum Muiderslot. I will be doing an exhibition there starting in December 2018. The piece will be unveiled on June 21. 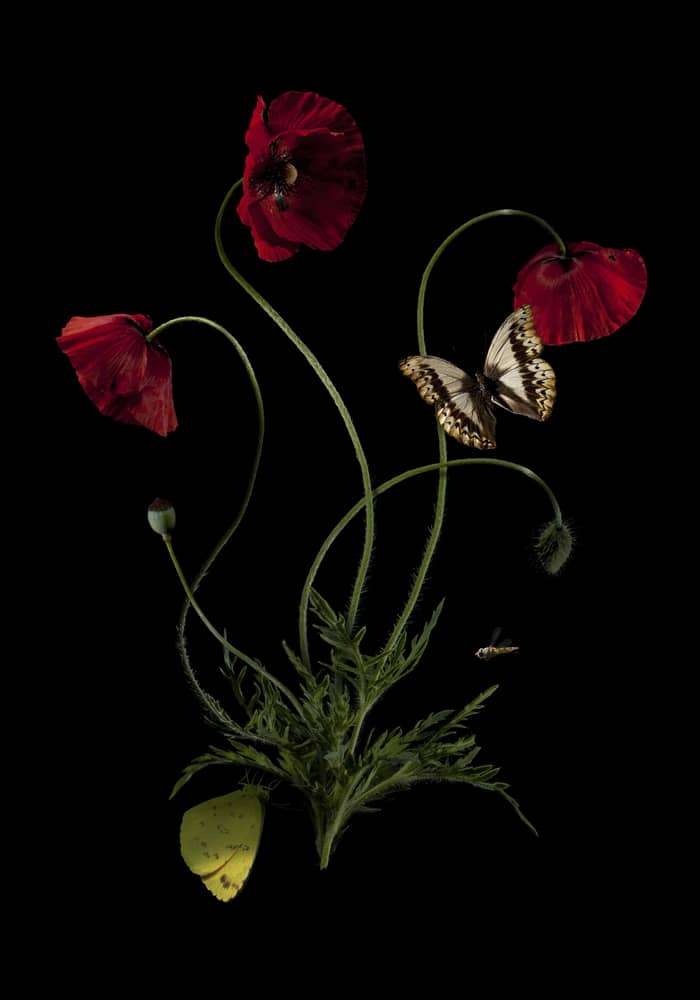 Bas Meeuws Mughal Botanical (#03), 2015 C- Print on Dibond Behind Acrylic Courtesy tasveer
Please take us through the Dutch’s old Masters style of still life photography
There have been a lot of styles of painting and the use of light in 17th and 18th Century. Works of Ambrosius Bosschaert, Baltasar vanderast, Rachel Ruys en Jan van Ostade are incomparable in style, use of background, colours and the sort of lighting. In photography there are a lot of photographers who use the Old Masters genre as inspiration. More people are making portraits, some shoot still lives and even less (only a handful) have the same workflow as I have.
TARQ, in collaboration with Tasveer showcased ‘Spring in wintertime’ in Mumbai, May 2018.
Photo courtesy – Tasveer
0 comment
0
FacebookTwitterPinterestLinkedinWhatsappTelegramEmail

A Painter from Goa: Being Introduced to Antonio Xavier Trindade