The world of art isn’t stranger to controversies. There have been many instances in the past when an artwork has created stir and found itself in a whirlpool of controversies. What irks the critics and audience when is difficult to predict, but messing up with idols of worship does lead to anguish. We bring to you some works that managed to drum up the controversy song.
MF Husain’s naked goddesses

Indian artist MF Husain, who according to Forbes magazine was Picasso of India, created a series of nude portraits of Indian goddesses and mythological figures. The representation of deities in a non-traditional way provoked a lot of criticism and several complaints against him were filed. He was also charged with “hurting sentiments of people because of his nude portraits of god and goddesses”. Eventually, after a lot of criticism and harassment he moved to Qatar in a self-imposed exile. Some of these eye-brow raising work include ‘Goddess Durga in sexual union with a Tiger’, ‘Goddess Laxmi Naked on Ganesha Head’ and so on.
Marcel Duchamp’s Fountain (1917) 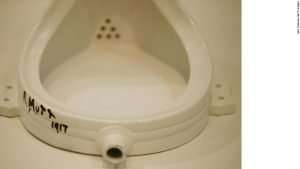 One of Duchamp’s most famous works, ‘Fountain’ is one of the most iconic pieces of 20th century art simply showcasing an upturned porcelain urinal. Entered into an exhibition of the Society of Independent Artists, Fountain was initially rejected, provoking the publication of an article – thought to have been written by Duchamp himself – which stated: ‘he took an ordinary article of life, placed it so that its useful significance disappeared under the new title and point of view – created a new thought for that object’. This notion of ‘ready-made’ art epitomises the changing perceptions of what art could be and particularly the conventions of the Dada movement.
Andres Serrano’s Piss Christ (1987) 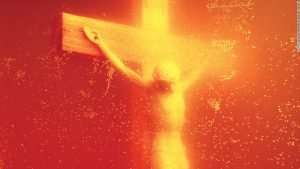 For more than two decades, Andres Serrano’s Piss Christ has been a polarizing work for its subject matter. The photograph of a plastic crucifix submerged in a cup of the artist’s urine has sparked controversy since its creation, but public anger came to a climax in 2011 in Avignon, France, when Catholic fundamentalists attempted to destroy the photograph with hammers. Though, Serrano, a Christian, originally said that the piece had no specific political motivation, he has since suggested that it was meant to highlight the continuing cheapening of the image of Christ and the hypocrisy of those who twist the words of Christ to fit their own ends.
Jon McNaughton’s One Nation under Socialism(2016) 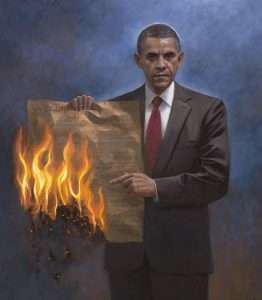 One of the most modern paintings on this list, this painting by Jon McNaughton has been very controversial because it puts U.S. President Barack Obama in a bad light. This painting shows the U.S. president burning the constitution of the United States while pointing at the flame.
Ai Wei Wei’s Syrian child (2016)
Contemporary Chinese art star Ai Wei Wei grabbed attention last year when he posed as the washed up body of deceased three-year old Syrian refugee Aylan Kurdi, who drowned after his boat capsized in the Mediterranean Sea last September. The boy’s body was found off the Greek island of Lesbos near the town of Bodrum, where Mr. Weiwei’s photograph was also staged; the young boy and his family were seeking refuge from Islamic State insurgents in Syria. Several critics ‘reset him for mooching an image’ like this.