The common misconception most people have, is that Folk Art and Tribal art are the same. This is understandable, for many folk and Tribal art practices are similar, having the same name; such as Gond and Warli. The difference is that Folk art is Region oriented. Each region consists of tribes, following different practices within the region, which is what we  call Tribal Art. The second difference is that Tribal art tells a specific story, communal livelihood, and their specific beliefs and rituals. Folk art, on the other hand, does not focus on
a specific community. Their stories are based on mythologies.
Let us talk about a few folk art practices.
Madhubani painting was invented in the Mithila region of Bihar. It is featured by detailed drawings of intrinsic, colourful figures and patterns. These paintings, along with pigment, are traditionally created by women. Each pigment is extracted from certain minerals: Black
colour is made from a mixture of soot and cow dung, white is obtained from rice powder, and other colours are extracted from flower and plant pigments. Initially, the tip of a bamboo stick was wrapped with cotton to be used as a painting brush. Their paintings involve nature
and motifs, depicting stories of weddings and other events, always showcasing Hindu deities. Currently, they use modern equipment to depict the same themes. Instead of natural pigment, they use poster and acrylic paints, with real brushes. Moreover, the base has progressed from
walls to handmade paper. 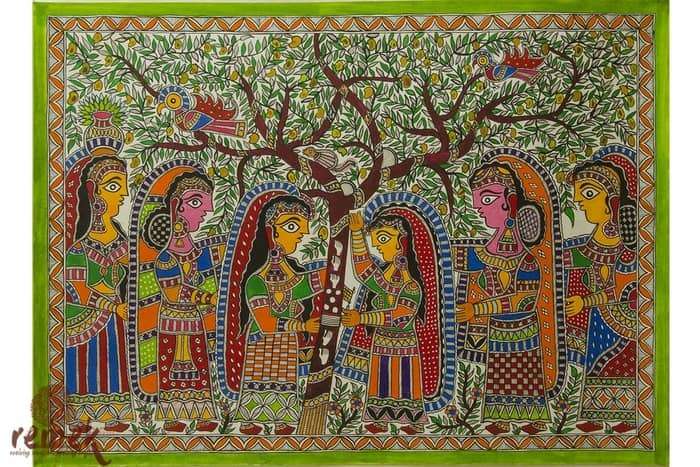 Kalamezhuthu painting is based on impermanence. Unlike other folk art practices, they do not use tools to paint, and they do not paint on walls, but rather; on floors. Sound familiar?
Yes, we are talking about the practice of Rangoli making. This practice is used by domestic households during festival time and is removed immediately thereafter. But we are not talking about the practice of Rangoli making in general, but a specific form. This form is called Kalamezhuthu, found in Kerala. Kalamezhuthu is only practiced on temple floors and sacred groves, and not in households. This folk art represents Hindu deities such as Kali. The materials used adds to the impermanence. They do not use paint, or any pigment that will
stick to the floor. Rather, they use natural pigments and convert it into powder. The entire piece is made by the artist’s fingers, without any art tools. The artist pinches the powder and pours it in the spaces, starting from the centre and making its way outwards. 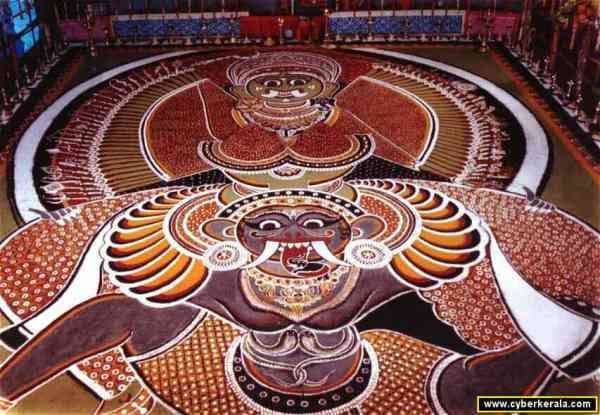 Tanjore Paintings showcase two themes, namely; religion and royalty. Its initial name gives the precise location it originated from; Thanjavur. This art form was invented in the 1600s, under the rule of Chola empire, after which it evolved with the changing dynasties. The question is, how did Tanjore Art capture the themes of religion and royalty? Emperors could portray themselves as Gods to showcase their power, but that was not the approach taken. The paintings are mostly religious, but the materials used were expensive, only the richest could afford. Thus, owning such paintings was the way Rulers showcased their power. The original paintings were powders made from lime and tamarind seeds on a canvas stretched around a wooden frame. They are characterised by flat, vivid colours. Through this description, one might assume two things, first that the paintings have a typically flat appearance, and second, that the paint materials used are expensive. You already know that Medieval rulers adorned themselves with jewels to showcase their wealth. Quite ironically, they demanded the same with paintings. These paintings are not flat, and it wasn’t the pigment that increased their worth; it’s what was on the paintings that made a difference. Tanjore paintings are inlaid with beads made of glass and precious stones, along with gold foil.
Over time, the traditional art form was replaced by the new. Tanjore paintings do not appear different, but the materials are. For example, they use cost- effective mediums such as plywood, synthetic colours and fake gems. Moreover, they are used as designs for sarees. A lot of folk art has developed into a commercial practice, and for good reason. The demand of urban society is such, that if a certain art form does not generate income, they become a thing of the past. To preserve Culture, one has to understand the value of it.

The Lonar Lake- A Geographical And Mythological History

Trending Art In The Market to Look Out for In...