For the love of Art

Painter and photographer Manisha Gera Baswani has forged a relationship with the art that decorates her eclectic home in Gurgaon. Constantly seeking beauty in even the most ordinary object, she strings beautiful melody out of the mundane. 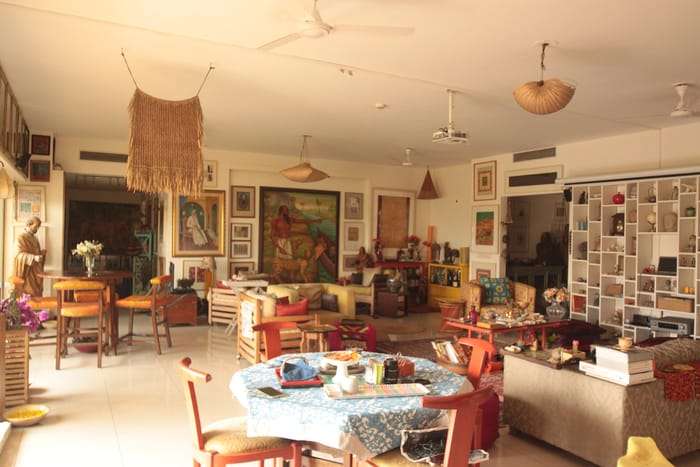 “While Roohi described the christening of these paintings called The Needle, and reflected on the pain she felt when her parents passed away, I saw how deeply the loss affected her. The sadness was insurmountable and it understandably surfaced in her works. That moment, as I watched my dejected friend recalling her parents, who hailed from India, I remembered mine who were forced to quit their home in Pakistan. The chants of the Azaan and the reflections brought tears to ours eyes, and us even more close.” 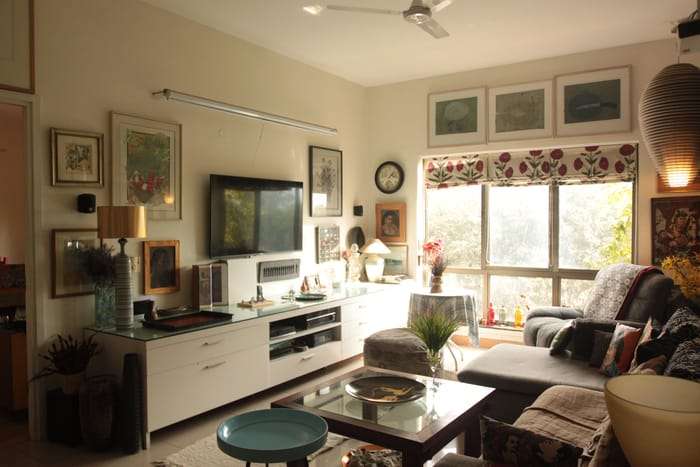 Even as I hear Manisha Gera Banswani talk about her friend, the Pakistani artist Roohi Ahmed while taking me through the austere but sharp works of the latter in her eclectic Gurgaon home, I can sense that for the painter art is something that touches the soul, a calming balm that she has secured a relationship with. Why else, would she narrate this poignant story to me while talking about Roohi. Because somehow, when she sees these works in her bedroom, she is reminded not just about her Roohi but also about her own parents. In that, her ties are deep… 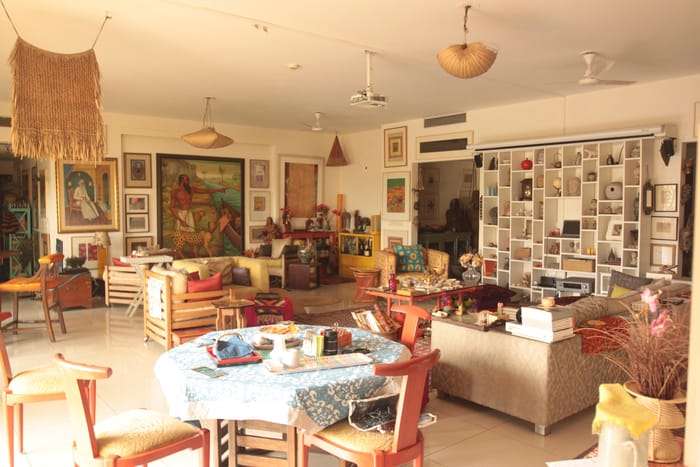 Spending a balmy December afternoon with Manisha in her nest, accompanied by anecdotes from her sojourns with art, artists, travels and life, can be quite an intoxicating reverie. Especially when the strains of Ustad Amir Khan’s thumri and a warm homemade lunch heightens the experience. To watch the painter in her studio poring over her latest creations as you take in all the prettiness that the home contains, is something I hadn’t experienced in a long, long time. 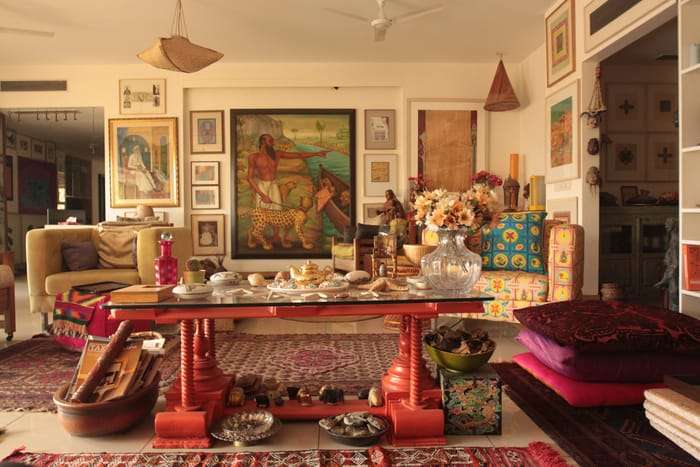 Manisha does not take credit singlehandedly for the gorgeous collection of art the Baswanis have collated over the years. It is a labour of love of her and her husband, Rahul, whose taste and eye was honed as a child when he was growing up with his paternal uncle, Ravi Baswani, the popular actor. “Their house used to reverberate with the jocund and intellectual repartee of theatre actors like Anupam Kher, Naseeruddin Shah and so on. Rahul also was an avid collector from an early age. So, while he hoarded Binaca toys as a boy, gradually the penchant attained a more serious and antique shape as he aged, In lieu of marriage to an artist, Rahul got exposed to the wondrous world of art,” explains Manisha pointing to the swords and other antique gifts that her husband picked up while he worked for the Young Presidents Organisation for 12 years. “Rahul once bought an expensive Jamavar shawl because he wanted to but never used it. That troubled me. I wanted to see it before me and so, took it out and laid it on the bedspread like the way I’ve hung the exquisite Phulkari piece that my great grandmother made for my grandmother. Art needs to be lived with, not stacked away.” 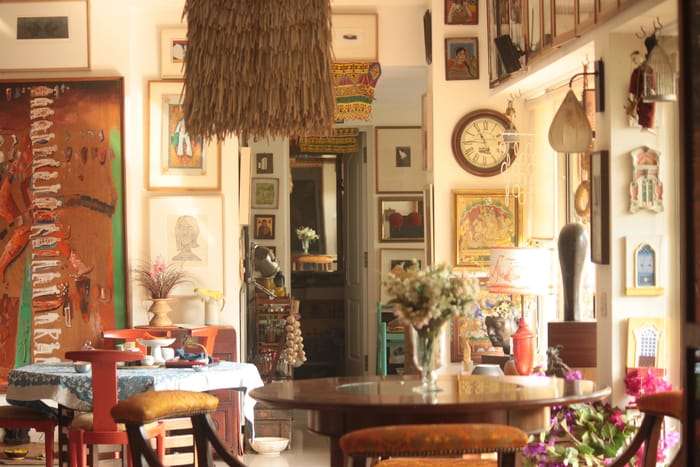 We cannot help but be affected by the antique Pichwais, the sizeable owl memorabilia collection, the banana fibre pieces from Kenya, the bowl of feathers (something that has piqued her creative faculties more than enough) and a tray of shell installations that the couple bought from a random shop in Goa. “We started collecting when art wasn’t an investment and stopped when everything became so commercial. We chose artists who were yet to be famous because we gravitated towards them out of love. That’s why we feel so deeply about our collection that includes all kinds of names like Jeram Patel, Gopi Krishna, Jyoti Bhatt, Attiya Shaukat, Nasreen Mohamedi, Aisha Khalid, Sarbari Roy Chowdhury, Laxma Goud and FN Souza.” And, every piece of work elicits a different feeling out of the house-proud lady, thoughts that fill up the better half of our afternoon. 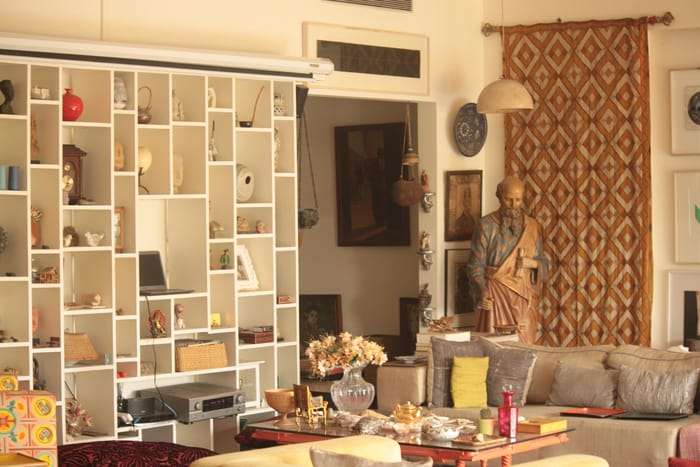 An artist who was mentored by A Ramachandran, Manisha broke into the art aficionado’s consciousness when 15 years back she started a project called ‘Artist through the Lens’ where she photographed eminent artists in their private work spaces; a kind of intimacy she enjoyed only because she belonged to the same fraternity and brought out a version of the artist that not a regular photographer would be able to capture. Along with the pictures she documented their conversations with her, an exercise that everyone admitted will be of immense value in the future years. At college, in Jamia Milia Islamia, she also studied under Paramjit Singh and Roobina Karode, and considered herself ‘blessed’ to have had such great teachers. She studied French simultaneously, which turned out to be a fortuitous decision that helped her to get an art scholarship to Paris in 1991. She joined Indira Gandhi National Centre for the Arts (IGNCA) after her return, to research the far-reaching influences of the 12th-century Sanskrit poem Gita Govinda by Jayadeva. Rooted deeply in her Indianness, the artist’s works reflect her ethnic and earthy fervour. However, there are the contemporary flickers that appear through James Bond and Elvis Presley in her interesting canvases. 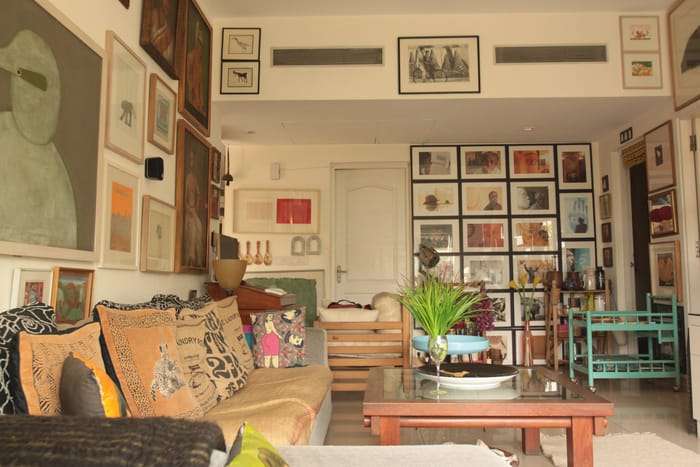 We notice a certain inclination towards the miniature style in her paintings because of their intricacy and finesse. She also has a knack to seek beauty in things that wouldn’t mass a muster in our eye. A motley of pebbles, a raincoat from the Northeast, beehives and wasphives… for Manisha, every single thing that affects her mind’s eye, finds a place in her home, a space, replete with a bunch of chirping parakeets, which has grown organically with its owners. 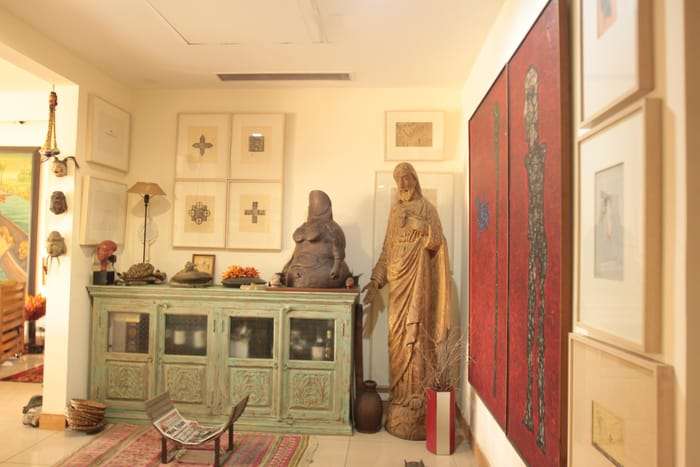 At Manisha’s home, art and life seamlessly blend to form a harmonious world. You hardly recognise the point that bifurcates the two. It’s a space where the artist feeds her soul. “I like everything to be in a certain way so I am constantly curating the space. When all are in sync, there is melody.” A beautiful thought to take us through the day…

2017 was the year of Music Festivals in India

“The exodus of eternal wanderers” by Sudipta Das