Internationally renowned artist G Ravinder Reddy opened his solo show at The Gallery, RMZ Ecoworld in Bangalore on July 9. This is his first in over a decade and brings together, a selected compilation of 18 of his sculptures and other works created through three decades of his artistic career, showcasing influences and explorations during the early, intermediate and recent phases of his work. The show is on till September 9. 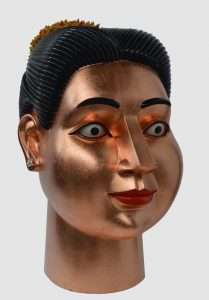 You are having this solo exhibition after a long gap of close to a decade. Is there a reason for this gap?
I have been showing in group shows for several years but with limited works. When RMZ Foundation offered to show my works, it had me excited as I saw it as an opportunity to showcase a range of works in the South. You see, though I am from the South, I have never done a show of this size and range.
‘The Gallery’ offered a large enough space to house my collection of works – something that is not easy to come by in this day. And the show being a not-for-profit one, enabled me to show some of my personal works, some from collectors of my works as well as some of the new works that I have created recently. The last show I had was in Chennai in 1991 with Sakshi Gallery, with 9 works. 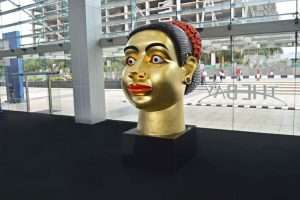 In many ways, this show is a mini-retrospective of your oeuvre spanning over three decades. Was any criterion followed to select works for this show?
The idea behind curating this show was to offer a glimpse of my career starting from 1980 with my earliest works to the present — spanning the three main phases of my career. The idea was to share the influences which played a role in shaping my craft. For instance, 1980-82 was about early influences and concerns about society and works with the influences of ‘pop art’ and Indian art influence; 1984- 90 reflected upon cultures such as Egypt, African and of course, Indian. Most of the terracotta work such as Akshatyoni, Urdvana series evolved during this period. 1991 onwards, my work was inspired by and reflected my surroundings. Started with heads, figures, couples – from the 2 feet head to the 10 feet head as well as life-size figures, I loved to create real people. 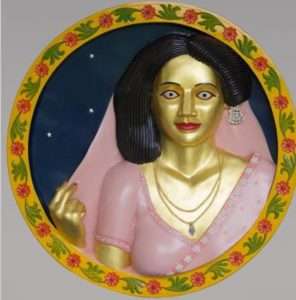 Your preoccupation with female heads and nudes is an insignia of your craftsmanship. What led you towards these two, if we may call them, muses or inspirations?
I like women and therefore, they are the subject of my work. In the 80’s, as a young artist, I viewed women very differently. I saw them as objects of desire. But as I grew older, my perception of women changed. The change in perception is what reflects in my work spanning the period. Also, my earlier works were smaller and the stance perhaps more rigid but in my later works, the figures are more relaxed in their stance, larger, more graceful and fluid. 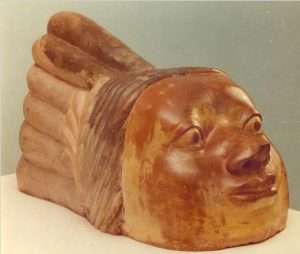 The use of bright colour adds an element of pop culture to your works. Has this been a conscious act?
‘Kitsch’ and ‘pop’, originally, were western ideas of art – moving from their pastel shades to the brighter colours of an immigrant culture. The Europeans and Americans were inspired by bright colours.
In the Indian context, however, I see it differently. Our culture is inherently vibrant and colourful and, therefore, bright colours in my work are intrinsically Indian. It would be incorrect to view our culture from a western perspective. 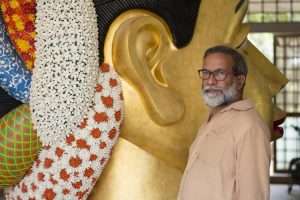 What are the challenges in creating large sculptures?
Not many sculptors are doing large works due to several challenges:
Visual Challenge: The challenge of looking at a large piece of work — if it is not integrated then it will look unappealing. It takes longer to work on textures, proportions, shape and volume in case of a large work.
Economic Challenges: The simple cost of raw material can be a challenge. There are few buyers of large works.
Physical Challenges: You need big money to move around large works for exhibitions. Add to that is the absence of large enough public spaces.
Also, the women we see in your sculptures can be placed anywhere in the universe. She can be African and even Egyptian… any particular reason for following this approach?
It is my belief that art should be meaningful and relevant even 10 years down the line. Only then has it achieved its purpose. I also feel art should reflect universal concerns. When I make an art work, I seek connect with very long lasting emotions shared by all cultures, all religions and all people.

Of Home, Homeland and more…