When gallerist Sunaina Anand met Ashrafi S. Bhagat in Chennai, she showed a keen interest in showcasing the works of the artists from the south as the former wanted to bridge the disconnect between the north and the south. That is how the concept of Moments and Transformations: Finding Life in Materiality” was born. While Sunaina owned the concept, Ashrafi as the curator of the exhibition knew what she wanted to bring forth while bringing together the works of Chennai and Puducherry-based artists. “Materials is something I have always been interested in. And since every artist engages with a certain kind of material, I was keen to engage with those artists who use varied materials as for expression”. 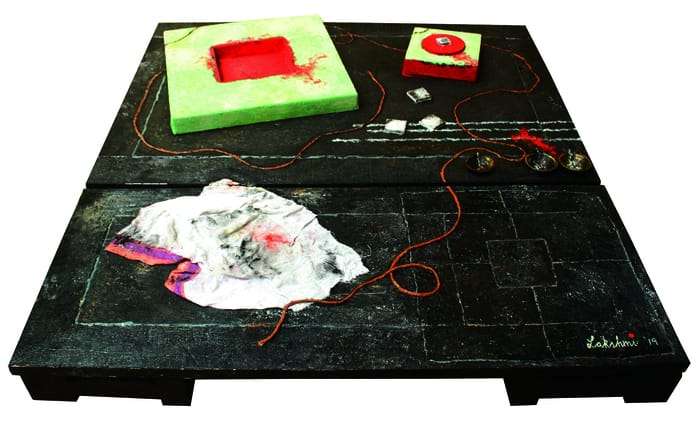 The result is: seven artists — Kirti Chandak, Manjula Selvam, Padmanaban T. and Gubendhiran K. from Puducherry and Lakshmi Srinath, Augustine Thilak and S. Potrarasan from Chennai –inhabit the spacious space of Art Alive with an insignia of Southern flavors. The fishermen, traditional temple art and a bunch of bananas, these are some of the things that inevitably lend a southern touch to the exhibit. But the universality of the ideas and relevance of artistic themes connects with viewers instantly. 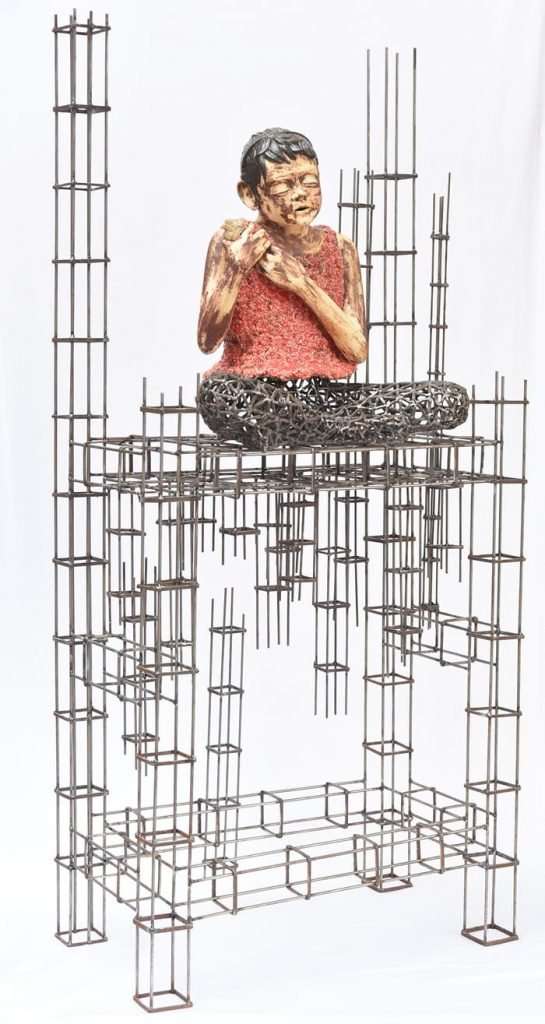 A case in point is Gubendhiran’s engagement with the fishermen community. He belongs to one and still goes out with his clan to catch fish in the sea. Thus, the relevance of materials such as sand and fishing nets being used in his paintings stems from there. However, it is the painting in which a human form is embodied in fish and so is the net that grasps attention of viewers. He elucidates how the work resembles the dream of every fisherman, who every night dreams about fetching a bigger catch. “Like every person dreams about big cars, big home or a great life… we mostly dream about fish because it holds the key to our dreams.”

People who scavenge dustbins when the rest of the world is sleeping inspire Kirti’s painting “Urban Mascot”. Often, the artist, says, when she returned home after an evening walk, she would see these people on the job, making way for a cleaner city in the morning so that we, the educated lot, can dirty it again. “I have titled it “Urban Mascot”, because they are someone who actually should be appreciated because knows that cleaning the city is the only survival. Her series of works are primarily done in paper pulp that she has made from the white banyan and t-shirt rags. “I get the pulp and make my own paper. The whole process of paper-making is creative. Depending on the concept, I insert materials, leave spaces and integrate things. In the “Urban Mascot” I have incorporated found objects and painted it with water colours using gauze on it. 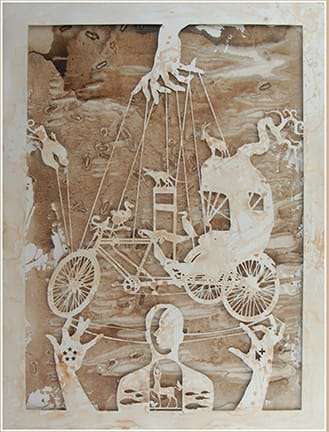 The concepts of environment and nature have also made their way into the works of Potrarasan and Augustine. While the former has turned his gaze towards environmental degradation, the latter’s works are an ode to nature.

“I am showcasing three works of ceramic and metal together. “Future Tense” work is about the present that is facing environmental issues and causing global warming. And the concept behind the Banana sculpture is about the girl child in India.”

Elucidating on his works, Augustine says, “Mountains are always special for me. They move me as I trek in the Himalayas regularly. For me, one should experience mountains and its life that teaches us a lot of things. Initially, it’s about connecting with ourselves when you are totally cut off from the world of internet and totally immersed in nature. That actually helps one to ponder more, to reflect more and then those mediations reflect on my paintings. Nature has its own balance and I try to strike that balance in my works.” 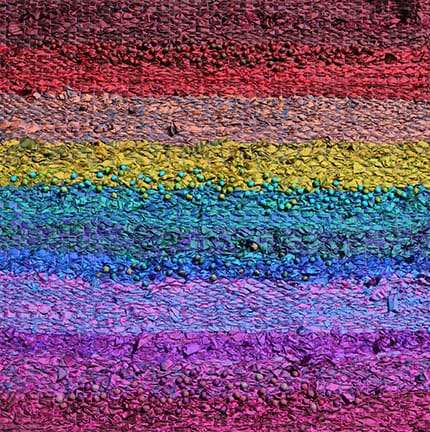 (The exhibition is on until October 5 at Art Alive).

Serendipity award grantee to document plays of a theatre troupe

The Last Supper and The Weeping Cross

Creative chronicles of a nomad