Kolkata has always been a pioneer of rich culture, and is a city of talent and passion. Be it music, films or even drama, Bengalis are always one among the best. Among all other cities in India, Kolkata is a prime hub for a great number of theatre groups, which exhibit plays with subtle but strong social messages and entertaining and innovative themes. This article mentions a few famous theatre groups in Kolkata that you just cannot miss if you are a fan of drama!

https://upload.wikimedia.org/wikipedia/en/0/0f/Bhand_Pather.jpg
Nandikar:
Nandikar is a theatre group initiated in 1960, with such theatrical excellence,that the group is now well known throughout the country and abroad. It is led by skilled actors like Swatilekha Sengupta, a recipient of the Sangeet Natak Akademi award,thusmaking the group one of the prime ones in Kolkata. Nandikar not only aims at delivering high-quality plays and dramas that concentrate on deep and meaningful work, but also works with various schools and universities, and also street children. The specialty of this group is the widely famous annual Nandikar Theatre Festival, one of the biggest theatre festivals in India.
Swapnasandhini:
Started by Koushik Sen in 1992, Swapnasandhani plays with a large array of genres, like science fiction, psychological thrillers, social concerns and sometimes even novel adaptations. The group is successful and well talked about, owing to theatrical works of supreme quality and equally talented artists. The group’s earnestness to experiment is what makes it unique.
Rangakarmee:
Rangakarmee, founded in 1976 by Usha Ganguly, is known mainly for the Hindi plays they produce, which focus on conveying messages about a number of social concerns and evils. This group is also involved in training programs in acting, mime, dance and music. What makes this group stand out, is that they have their own musical troupe, Rangasuravi, and they also have an entirely separate category of a children-friendly theatre group “Rangoli”.
The Hypokrites:
Hypokrites, which means “actors” in Greek, was initially a college theatre group, founded in 2008. The group primarily participated in inter-college fests, until it won Abhinaya, the National Theatre fest at Bangalore, after which they got themselves registered as a professional theatre group. They also conduct an annual theatre festival, called “Porjash”. Majorly comprising of young and innovative individuals, the themes that they perform on, are fresh and original, drawing rave reviews from critics and the masses alike.
Shriek of silence:
In 2012, a group of students from major colleges and universities, along with a few professionals, came together to form SOS. With members of ages 18-28, their plays mirror the voice of today’s youth in changing today’s world. This group refers to itself, as “The passion voice of theatre”, and is driven towards popularizing Campus Theatre in Kolkata.The Kolkata Youth theatre festival was started by this very group, with the “One billion rising revolution”, a global movement to end rape and sexual violence against women, as an awareness partner. 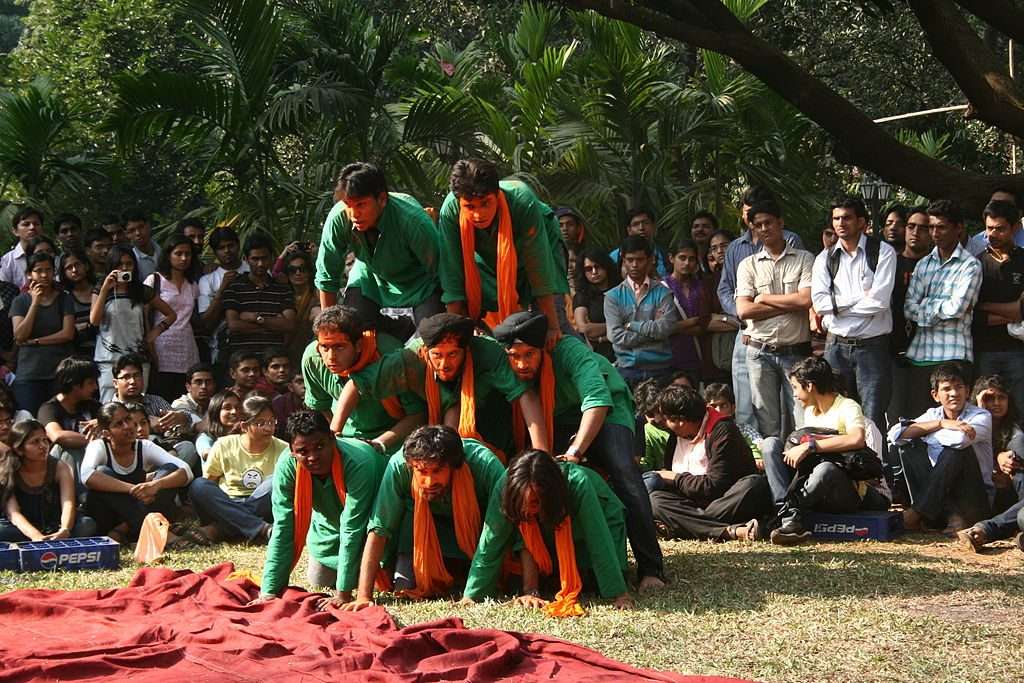 https://upload.wikimedia.org/wikipedia/commons/thumb/2/22/6.1_aagaz.jpg/1024px-6.1_aagaz.jpg
To conclude
The theatres mentioned before are only a small sample of what Kolkata has to offer in Group Theatre. With more people inclining to theatre, Kolkata would soon become home to the biggest group theatres in India.

Institutions romanticizing dance has been disastrous for the dance ecology:...

Myth is created to educate people about certain issues