A male trans-national dancer from Australia pursuing Bharatnatyam as a profession in an increasingly rigid political, social, and cultural India; Christopher Gurusamy an alumni of the famed Kalakshetra talks about his yearning to dance and the challenges he often meets on the way:
Tell us about your exposure as a child to dance especially Bharatanatyam 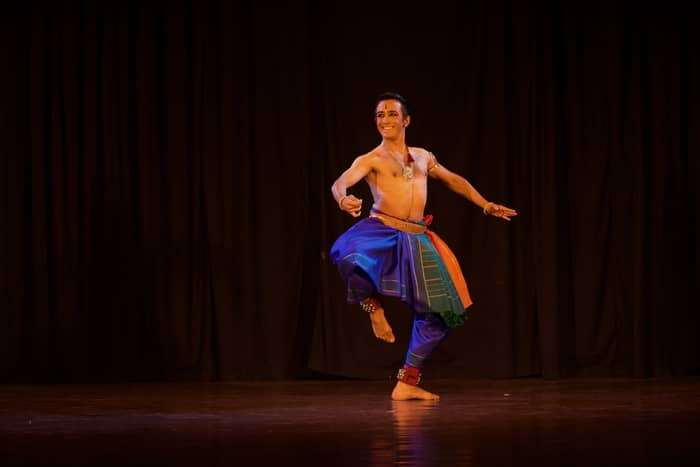 My fathers’s sister was the first woman to go to Kalakshetra from Singapore in the 1960s. Smt Jayalakshmi Raman, she was my teacher but she was also my mother;s teacher. My mother moved to Australia in the 1980s from Leigh, a small city in-between Liverpool and Manchester, she took to Indian dance on a whim of self-reinvention and took to it very naturally, she was my Athey’s first student in Perth, Western Australia. My parents met at a party for the Nizam of Hyderabad in Perth where my mother was performing and my father was attending! They fell in love and got married and had me. My mum danced through her pregnancy and then went back to class once I was born and would take me to class with her, and I never really left dance class after that. As a little boy, I would run around in the middle of my mother classes dancing, pretending to pick flowers, re-choreographing thillanas and being a very bossy boy correcting everyone (my mother included). Dance has been something I have grown up with.
We moved to rural Western Australia when I was 7, and that is when I started to learn other forms, I started learning tap because I found it similar to Indian dance, later I took up ballet, jazz and learnt gymnastics and continued with them and bharathanatyam when we returned to Perth when I was 10. So for many years, I learnt all of them running from class to class, my homework left unfinished. My dad used to have a saying “if you;re going to do something, do it properly” and when I was 16 I started to take my bharathanatyam more seriously. After high school I applied to be part of WAAPA the Western Australian Academy of performing arts. It was in this audition while doing ballet bare work that I realized how much I really hated ballet, loved bharathanatyam and wanted to go to Kalakshetra. So, I asked the panel to not accept me into the course which would let me go to India and study (something I only told my mum YEARS later). 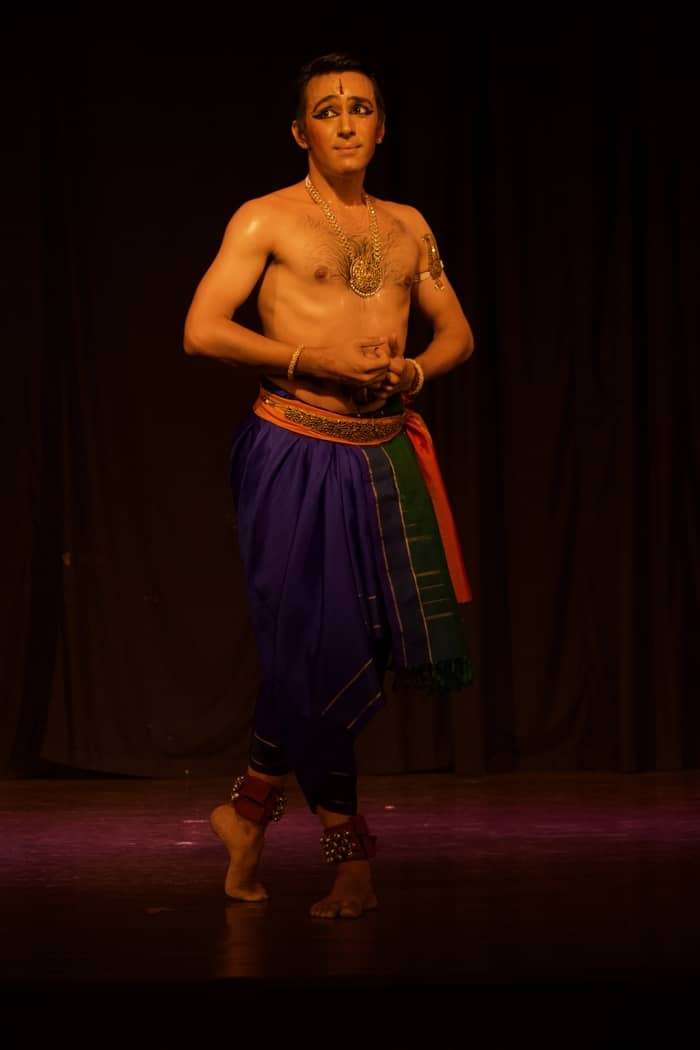 What made you take the plunge from Australia to India joining the famed Kalakshetra and how was your early experience?
Stupidity, excitement, stubbornness, a yearning to learn more; and just the love for dance brought me to Chennai 13 years ago. I was such a dance-nut, I was so completely obsessed by bharathanatyam that I made me want to at least try and get through the course at Kalakshetra. I came to Kalakshetra, clueless as to what I was getting myself into and I didn’t think I would have lasted the 4 year diploma yet alone postgraduate if you had told the 18-year-old me that I would stay here and try to pursue a career as a dancer, I would have told you that you were crazy!
Perth was very culturally isolated growing up, we didn;t have performers coming through with solo or group work from India, and so I had no idea that being a performer was an actual option. It wasn’t until the first time I saw Leela Akka dance at the Kalakshetra auditorium performing Ardhanadeshwaram in Kumudakriya that I realized what I wanted to become, it was a very important milestone for me, I think it was more apparent to people around me than to me that I wanted to be a soloist but I worked really hard my entire journey at Kalakshetra and realize now how important my time at the institute was. In many ways I felt like I had gotten my letter to Hogwarts when I was accepted into Kalakshetra! I was suddenly in this college where talking about dance 24/7 was normal, with people who loved dance as much as I did. I think that made the cold showers, early mornings and hard beds easier. I look back at my 7 years at Kalakshetra as really golden years of my life, I was there for Leela Samson’s entire tenure, so it was a great time of the institution go through changes, it was brilliant. 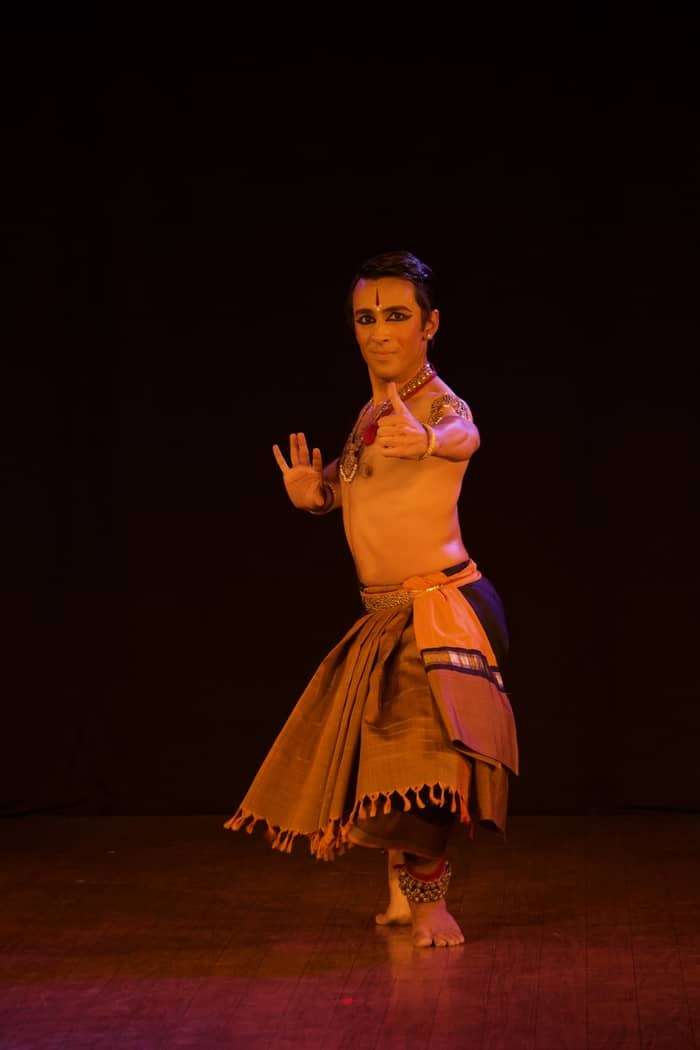 It was tough to be away from my family, but it was a small price for the learning I was receiving, it was also before WhatsApp, Facebook, YouTube, and Snapchat so we were immersed in our studies with very little distractions. In retrospect, I have in the 13 years I’ve lived in Chennai done things that little Chris would have never dreamt possible! I’m so lucky to have parents who let me fly and be there to support me; it’s not every day that your dreams come true!
More than a decade dancing in India, how do you feel is the acceptance of trans-national dancers by the audiences in the country?
I think people are very open to and accepting of trans-national dancers, but at the same time, I believe we have a lot more work to do or atleast I do. Sometimes I get worried that people are only coming or I’ve been given opportunities because my name is different or ‘fancy’, so when performing I feel I have to have my own standard at the best I can get them too, to ensure that an opportunity is not wasted and that I am deserving.
Being a male in a woman dominated the field, a positive or a negative for you
It;s both. It is much easier to be recognized. There are a thousand great female dancers for every male dancer, and the competition is very high for all of us. However, there is still a backwards notion to the general public that dancers have to be female, in fact, this week a hotel asked me for a corporate event and spoke to me about all the details until he realized that Christopher was a male name! And then retracted the offer and quickly explained that the organizer required a female dancer. My question is why? Either the organizer wants to ogle at a pretty girl, or doesn’t believe that there is merit in male dancers. It’s sexist and discriminatory and it’s also a reality that male dancers live with.
Our predecessors made us equals in most of the sabhas in Chennai and really have made being a male dancer much more inclusive, there are still a few sabhas which show preference to female dancers and don’t really show male dancers, but our generation must prove to the public that we are equal to our female counterparts. 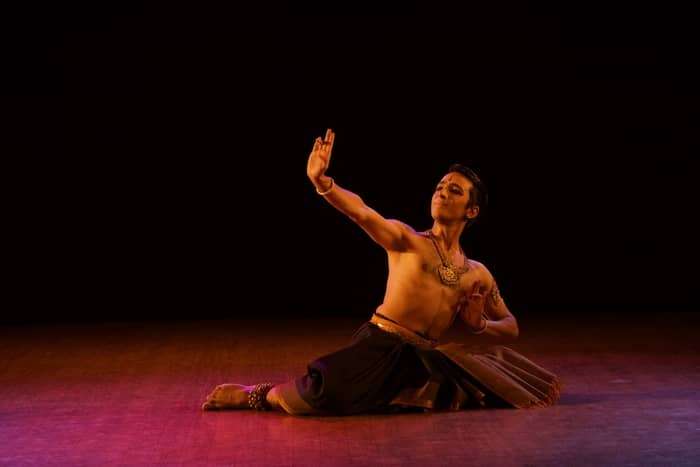 What do you think is the financial viability of solo dancers in India practicing classical art forms?
It is really tough, even when shows come, the money isn’t always enough to cover your expenses and there are times when payments are not given on time and you are left in precarious situations. Dance is not a cheap profession; it’s a lot of hard work if taken seriously. I do believe that it is a full-time job. I think a lot of people talk about how much they love to dance and how committed they are, but dance is more about sacrifice than anything; not going out to parties, missing family events, birthdays, working every day including weekends all on yourself for the betterment of yourself. There are days you just want to sit on the couch, and the financial remuneration doesn’t always match the number of billable hours you have put in, but that is what dance requires, sacrifice because if you do work diligently, with honesty and integrity I think that the reward is the dance itself.
Finally, why Bharatanatyam?
Why not?

“The exodus of eternal wanderers” by Sudipta Das