An emissary of heritage handloom weaves and saris, Nidhi Jain’s other love is art, which is reflected in her exhibition space called Gallery Ragini. On a balmy afternoon at her nest dotted with interesting paintings and sculptures, we learn what initiated her into this wondrous world.
It’s 12 noon and the world outside is swooshing by. But not in Nidhi Jain’s home. The air here is tranquil and composed, reflecting the mood of the owner. “When you are surrounded with beautiful things at all hours, it’s difficult not to feel the zen. And, that’s what makes me thrive…” trails of Nidhi as my sight moves towards a GR Iranna canvas that is difficult to not notice. Its earthy tones and blue hue plays delicately against the warm rust background. “That is one of the most cherished works of Iranna because he made only two in this series. Art for me is instinctive. I never really cared about their commercial value. All I think about is whether they move me. If they do, then they become a part of my home,” Nidhi breaks my reverie. I notice she laughs a lot. It sets the mood for the rendezvous. 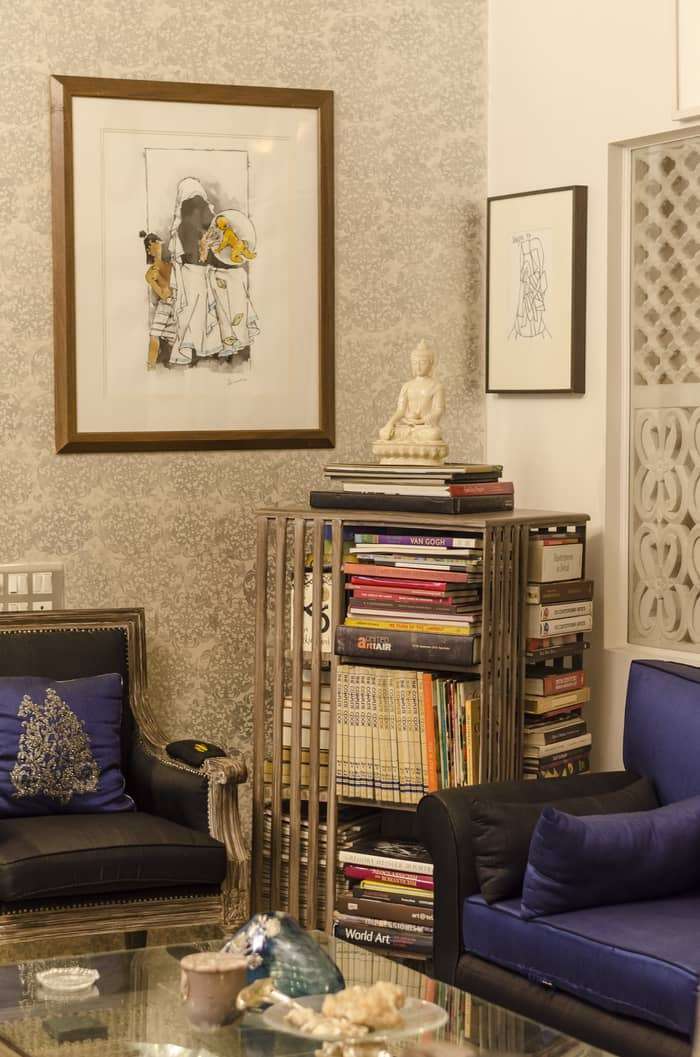 Nidhi Jain grew up appreciating everything that reflected an innate Indianness. For her work and otherwise she has travelled far and wide but she noticed that involuntarily she mostly gravitated towards things that showcased the rich heritage of our country. “Look at these wooden sculptural door borders and this statue. They are steeped in the artisanship that is present in our artists. Like this little painting from the Kishangarh school of Art. It showcases the beauty and the romance of the miniature style of painting. I have known Vaishnavi Kumari, the princess of the Kishangarh royal family and we started talking about the art practised there. Eventually I knew I had to bring this home,” explains Nidhi. 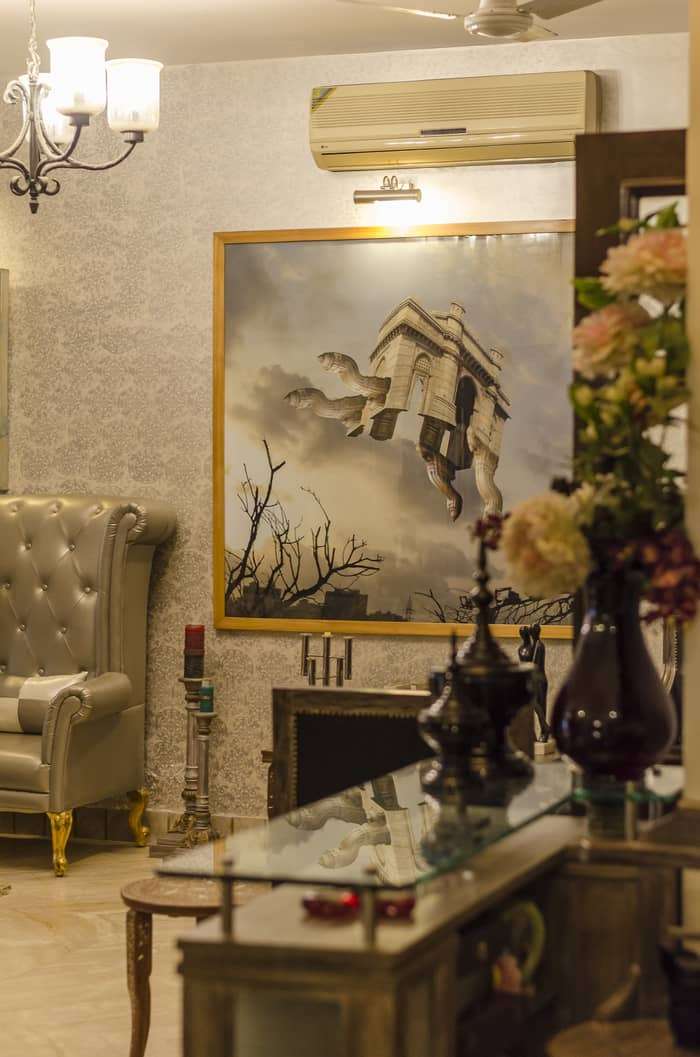 This was another side to Nidhi that I was loving. Till now, I had only seen what an ardent textile designer she was as she spoke about how the Indian weaver constantly inspired her. “Look at yourself, the colours you are wearing. Rust paired with dark magenta, and trimmed with olive green. Can anyone but us Indians, conceive such surprising yet glorious combinations!” Nidhi Jain had remarked at my handwoven tussar the first time I met her three years back. Nibbling at the tantalising lemon cheese cake sitting before us, I immediately stopped and looked up at her and smiled. “I am glad you think this works because somehow my mother doesn’t. She’s from the old school where saris needed to be matched with blouses. But I love contrasts. It’s how traditional weaves can get that contemporary spin,” we hit it off instantly over our love for handloom, textiles and the delish dessert. 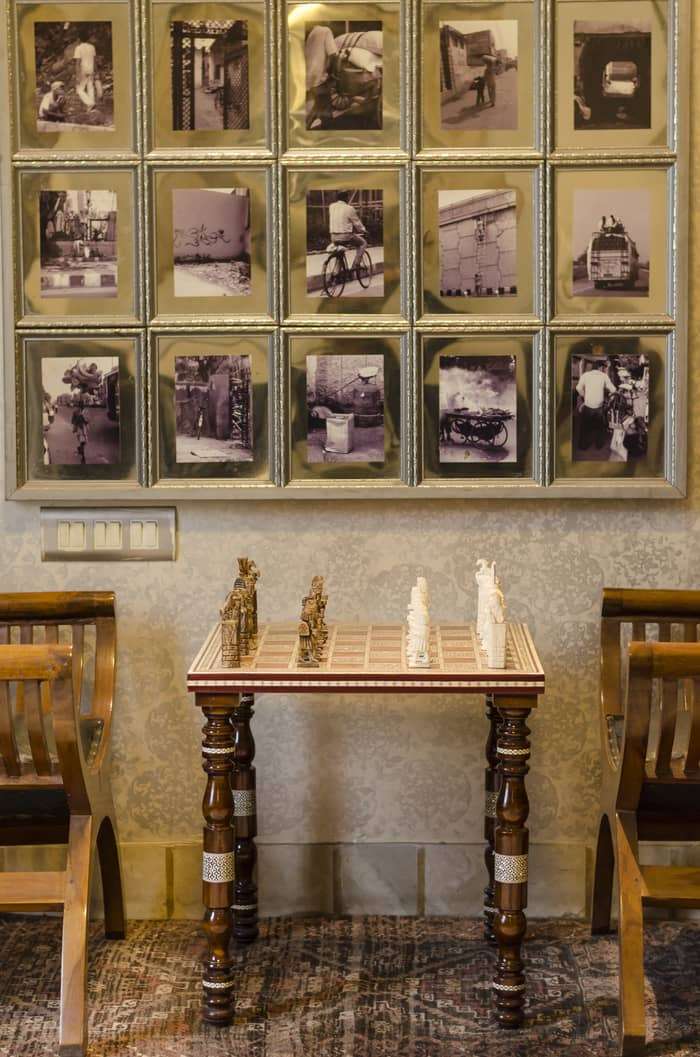 The other day, as we met up at her abode, I could see that Nidhi’s love for everything beautiful and Indian is not just restricted to fashion and handloom. She has a yen for exquisite workmanship and she does not really care about the flashy names. Rather she likes to constantly unravel the fresh talents and give them a solid platform. An installation panel of interesting black and white photographs by Suchit Sahniin her lobby proves that. Gallery Ragini has been working with this artist since 20o4 and as Nidhi explains, his works were written off by many experts initially because they thought that this was not a product of an intellectual source. But these probing vignettes of life and living in the Capital, clicked by Sahani found favour with the art connoisseur because she noticed him re-inventing them in a pop version. “I nurtured him from the very beginning and we threw light on his diligence and intellect, which were being overlooked by those who would rather buy the big names for their commercial viability.” Suchit’s works also add colour and funk to Nidhi’s den, a cosy nook where the house-proud lady likes to spend time with books and music.
In the lobby is an antique Persian carpet as well as two wooden masks procured from Mauritius that Nidhi loved for their intriguing occult demeanour. 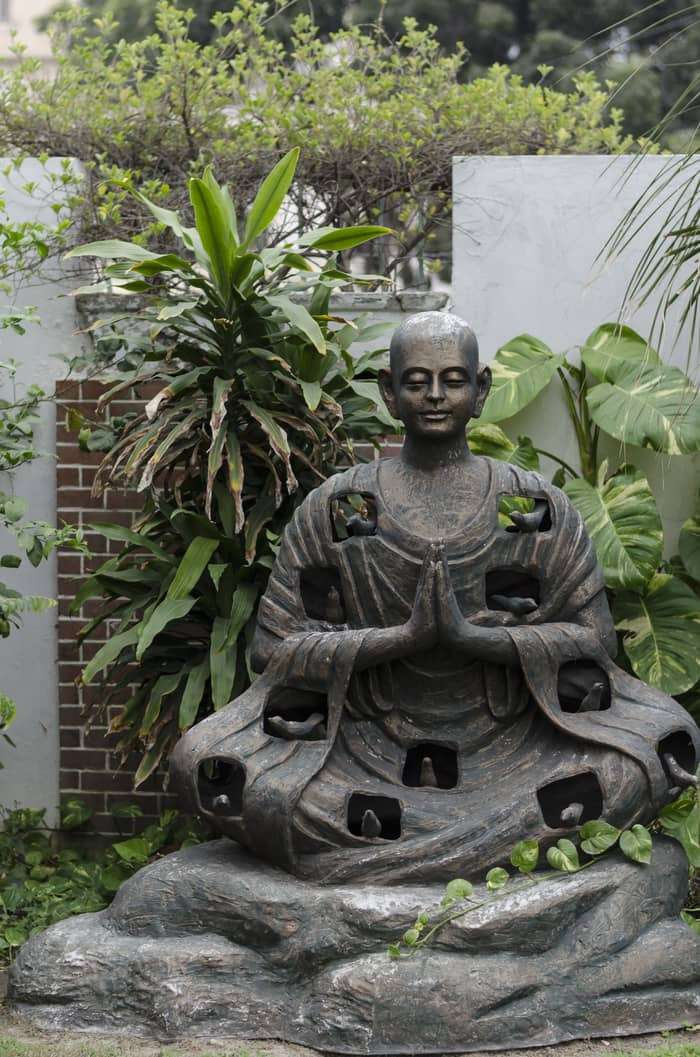 Art is all about interpretation, which rests on subjectivity. That is why you would find the art in Nidhi’s house enjoying a flexible space. She has brought together art from various parts of the country and created an enjoyable collage. Like in the receiving room, there are these wooden pillars from Kerala that were collected from a home there and they have been positioned on granite stumps collated from Rajasthan. A Tilakarajan Ganesha sculpture is the central piece in this room (another two carved wooden panels by the artist was bought by Nidhi 16 years ago to deck up one of the doors in the house). A pretty Vaikuntham canvas (one of Nidhi’s favourites), four exquisite enamel Kathakali faces (bought by Nidhi while at the Kochi Biennale a few years back) and an engraved wooden elephant head completes the setting. “I always wanted a contemporary home in the Capital but a place that was Indian at heart and look.” That explains the jaalis in the windows, which she says are her favourite parts of the interior design, interspersed between the FN Souza sketches and below the Gigi Scaria works. 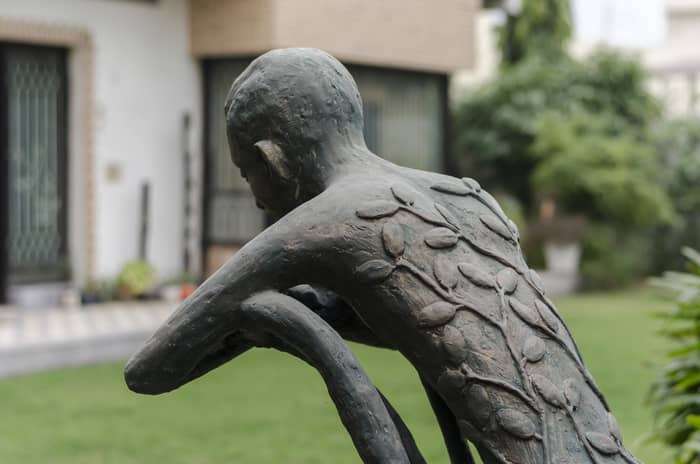 A unique installation on top of one of the main doors by Kannada artist Siri Devi Khandavilli is called the Lucky Lakshmi Dollar bill that is a fun but piercing mockery of the greed for money. Abstracts, feels Nidhi, have a language of their own. Just like the Tushar Joag painting that hauntingly reminds the viewer of the Bombay that slowly transcended into Mumbai. “The artist trued to depict how the metropolitan feel of the city was being sucked out and the Gateway of India was flying around to find a firm rooting.” 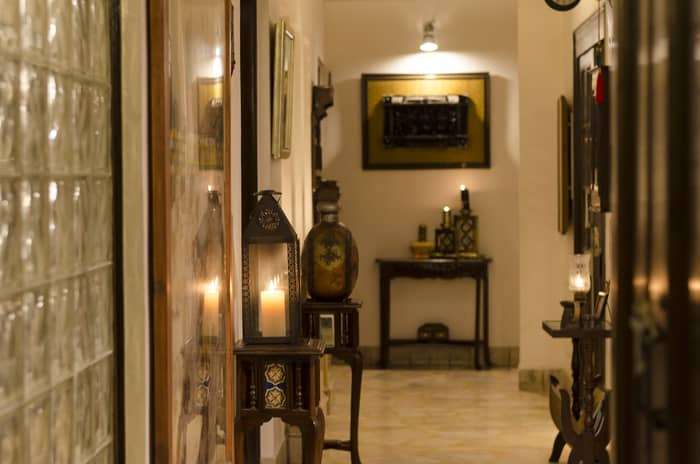 Conversation flows through the afternoon as we browse through Nidhi’s art collection that she so lovingly has build up over the years. “When I work with weaves I try to denote the rich history of our country and there’s nothing timeless than those pieces of art. Even when I collect art and work with artists for my gallery, I seek out the Indianness in the works,” rounds off the amiable connoisseur.

For the love of Art