I found that arriving at Cochin International Airport on one’s first visit to India can be quite bewildering. In a way, it felt like a too-soft of a landing anyone could ever experience in India. Honestly, I was more underwhelmed than confused by the wide highways, sturdy bridges between the islands and ordinary looking buildings on the way to Fort Kochi. To put it out there, I was expecting the intense bursts of mystical colours, scents and sounds that India is often portrayed in works of literature and films. Compared to what I expected, Kochi felt like a ‘Lite India’. I tried to explain my disenchantment politely to Sanju, a friendly Kerala-born taxicab driver, who laughed and asked me where I will be heading next after Kochi. “Allepey, Hampi, Jaipur, Pushkar, Jodhpur, Udaipur, then Varanasi and Delhi – don’t worry, Mam, you’ll see a lot of different kinds of India alright, all the crazy people, art, food, everything. But, I will tell you now that after three days in the North you will miss and want to come back to Kochi, guaranteed!”. I laughed and asked him to tell me more, and then my ears perked up when he mentioned the Kochi-Muziris Biennale. I’ve been hearing this particular art biennale in an old trading port town in South India being praised internationally as one of the most engaging contemporary art festivals in the world. That is precisely the main reason for Kochi being on the top of my well-planned itinerary. By the time I arrived in Fort Kochi at midnight, I realized that it only took one and a half hour drive, a knowledgeable taxicab driver, and the promise of art-fueled adventures to halt one’s first impression on the city. 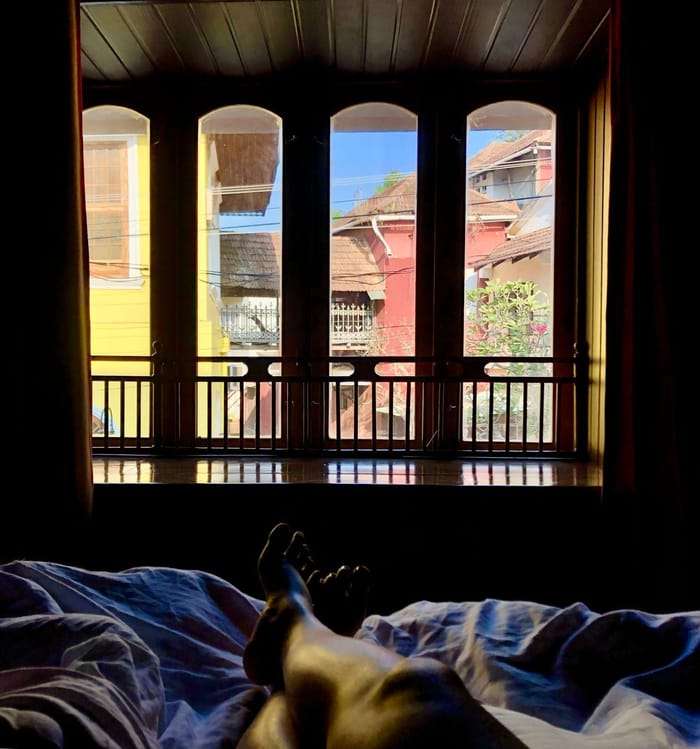 The view from the hotel on Princess Street, Fort Kochi

It is safe to say that by the time I woke up in the morning, I was glad to stand corrected by the charming and sunny Fort Kochi. I woke up to the Princess Street’s view of the unmistakable colonial style buildings with stalls at their fronts selling mounds of spices, bottles of essential oil, Kashmiri embroidered fabrics and anabundance of Indian handicrafts. As I walked my way to the Aspinwall House, the primary venue for the Biennale, my eyes were feasting on the murals, boat jetties, bustling ​ tuk-tuks (auto-rickshaw), students in their bright blue uniforms and women with their floating sarees in every colour imaginable.

Also, I saw a lot of tourists with the Biennale map on their hand and the spring on their feet. It had been running for more than a month by then, but still, I‘ve met a few locals whose eyes sparkled when I made small talks about it. It was obvious that not only almost all locals knew about the Biennale but they’re also immensely proud of it. Biennale posters and signages on the walls and streets, the enthusiasm was inevitably contagious. 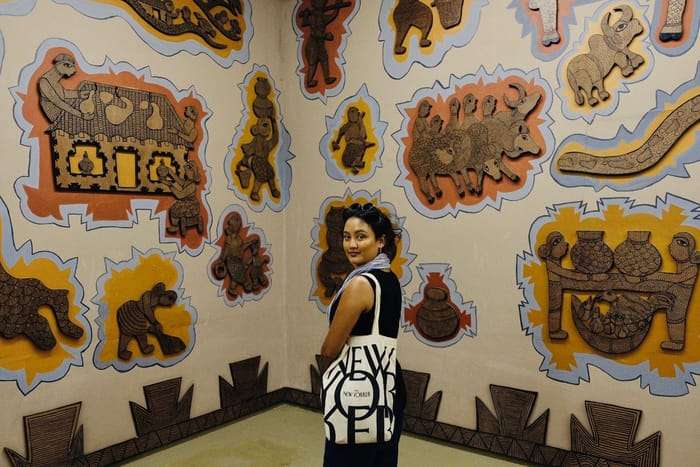 I arrived at Aspinwall house and bought the ticket and map for a very reasonable price of Rs 100 per person (Rs 50 for children up to 15-year-old). First, the Aspinwall House is a large sea-facing colonial-style property, still, the Biennale artworks impressively do the space justice. The first room I entered has high ceilings and big pillars, with its every wall covered with hundreds of paintings on plywood cutouts in various shapes and sizes. The brothers Durgabai Vyam and Subhash Vyam, the Gond School of Painting’s renowned artists, were trained traditionally to practice the painting style of the Gond Pardhan caste in Central India. A style sobeautifully presented in the work titled ​ Infra-Project (2018), the depictions of Gond’s folklores, floras and faunas in its unique colour palette composed of natural pigments. 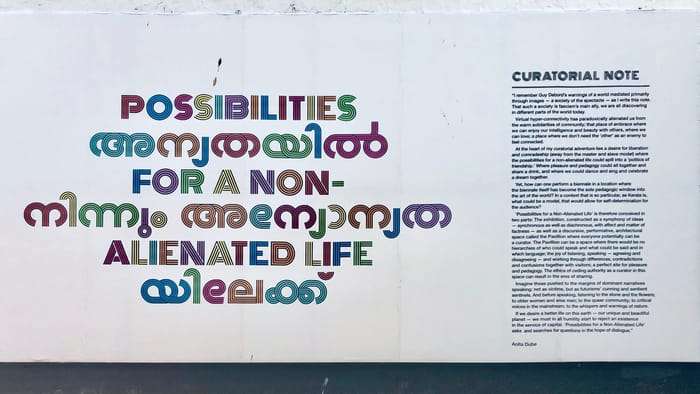 The second room houses the works by artists from various nationalities, such as South African artist Marlene Dumas’s poetic portraits on paper (​ Vocabulary , ​ 2018) and Lebanese artist Walid Raad’s political collage works (​ Better be watching the clouds ​ , 1992). I quickly learned that Aspinwall House is a compound of multiple pavilions with a big courtyard in the center of it. While I sat on one of the tree swings on the yard, I read the Biennale’s curatorial note by Anita Dube in which the theme is written artistically on the wall; ​ Possibilities of Non-Alienated Life .

With that in mind, I explored the next two-story building and found myself instantly mesmerized. Indian artist Vicky Roy’s high-contrast black and white photography works juxtaposed visualizations of homeless children and the changing landscape of the Himalayas (​ Street Dreams , ​ 2015 and ​ The Scarred Land: New Mountainscapes ​ , 2017). In the same room, I stood amid the hanging tapestries and 20-feet-long of bookbinding art of Sri Lankan artist Anoli Perera. The works meticulously uncovered the painful disconnection in post-independence Sri Lankan diaspora family and community (​ Left Behinder ​ , 2018). 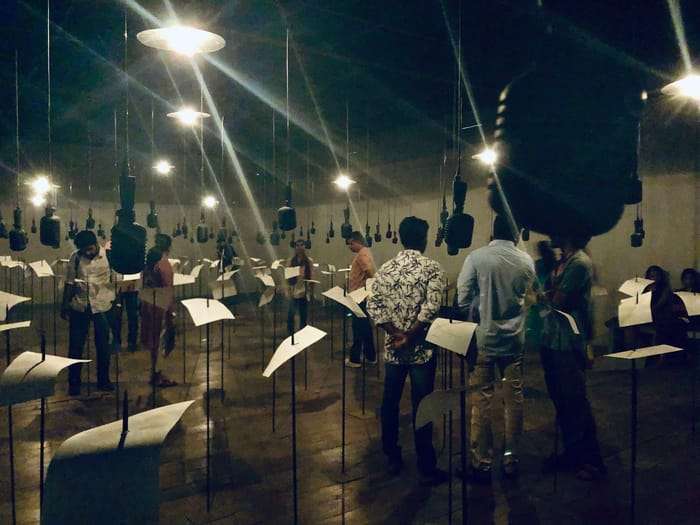 Also in this room, both Indian artists Shilpa Gupta and Vinu VV, and Mexican artist Mónica Mayer gave voices to those who have been marginalized and silenced in societies. Gupta’s speaking microphones installation revealed the voices of a hundred prisoners who were or still are imprisoned because of their politics (​ For, In Your Tongue, I Can Not Fit – 100 Jailed Poets , ​ 2018).

Vinu VV challenged the heteronormativity and moral policing against women and queer community in Kerala society through his installation of three-hundred wood figurines and video works (​ Ocha , ​ 2018). Mayer’s ongoing participatory installation heightened the global awareness of sexual abuse in the form of anonymous reflections and responds written on yellow post-it notes, which have been archived and exhibited all around the world for forty years (​ The Clothesline ​ , 1987 – present). 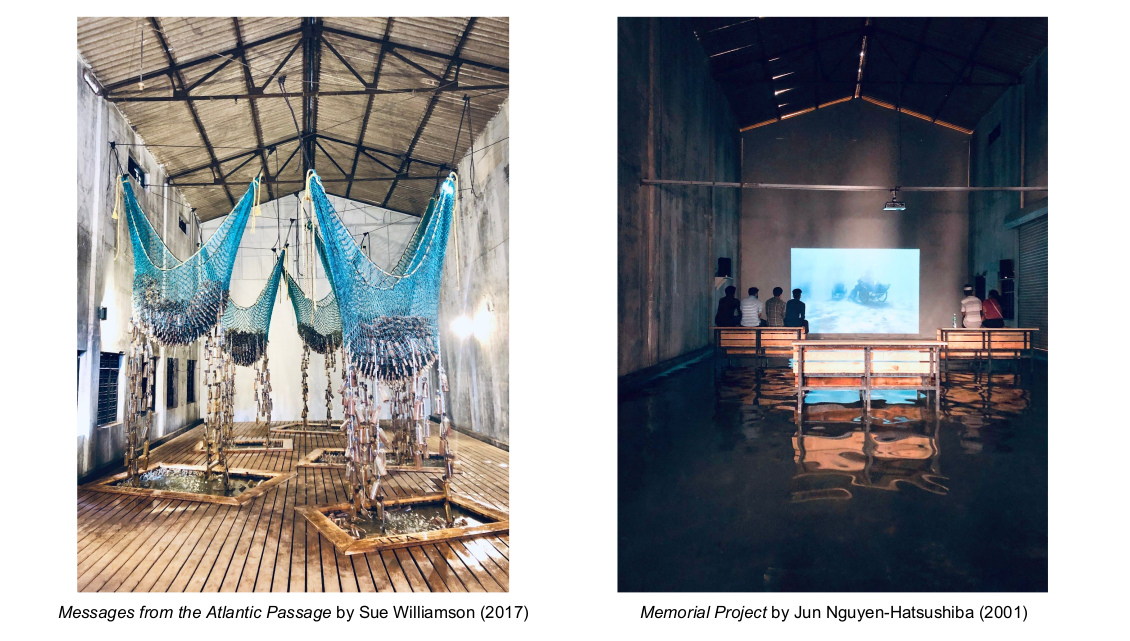 I finished the Aspinwall House round with the two massive special exhibitions, which are English artist Sue Williamson’s massive fishing nets installation (​ Messages from the Atlantic Passage ​ , 2017) and Japanese-Vietnamese artist Jun Nguyen-Hatsushiba’s site-specific video installation projected in a flooded room (​ Memorial Project Nha Trang, Vietnam: Towards the Complex , ​ 2001). Both works conveyed importantenvironmental awareness in the most striking and impactful way. I opened the map excitedly to decide on the next venue and I saw the venue Pepper House has a food icon. What could possibly be better than the combination of food and art? 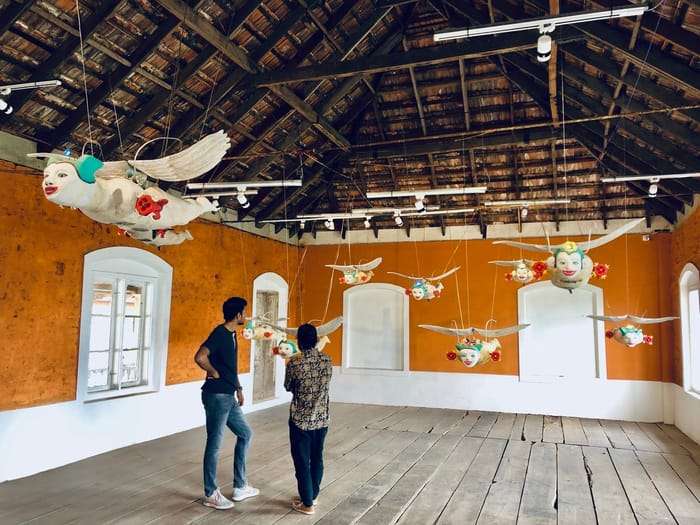 Turned out, Pepper House is. The Dutch-style waterfront heritage property used to be a dockside warehouse, now currently houses a cozy café, a visual arts library, spacious art studios and a design store. After a substantial lunch, I explored the art space where I was pleased to see the leading Indonesian contemporary artist Heri Dono’s installation exhibited there. Dono’s kinetic sculptures of smiling angels and missionary boats hanging serenely from the ceiling, a symbol of uniting the narratives of East and West in the hope for one peaceful world (​ The Trojan Ships ​ , 2015 and ​ Smiling Angels ​ , 2018). 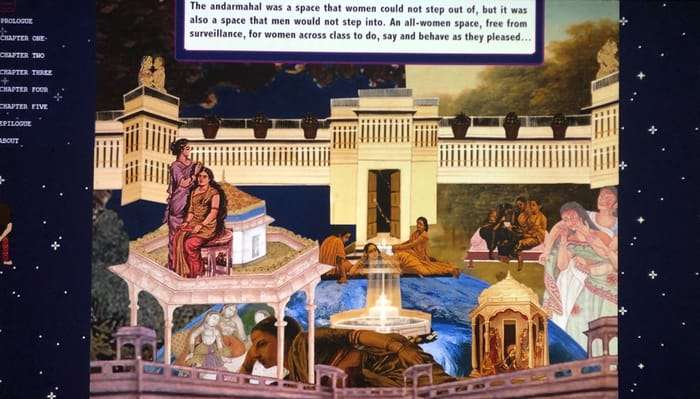 I decided to take a ​ tuk-tuk to the last venue that day which is Kashi Art Gallery, or the Townhouse as locals call it. It is the least assuming of the three venues, and a cheerful exhibition guide told me that it was once a familyhome. The works are more intimate and subversive than the others, hung on its yellow walls are candid visual representations of women and LGBTQ issues. Such as Indian artist Afrah Shafiq’s multimedia installation that got me engaged in it for almost an hour. I was immersed in her digital vortex of women’s history in India through her interactive texts, videos and animations (​ Enter Sultana’s Reality , ​ 2017). I decided to call it a day and to continue the next day, the Biennale had proven itself that it is easily worthy to spend two or three days trip in it.

On the next day, I started early to enjoy some of the smaller exhibitions called ​ Collaterals . ​ These exhibitions are held at the smaller venues, and finding every one of them felt like a treasure hunt. Manisha Gera Baswani’s enlarged postcards hung in an old warehouse, the exhibition displayed not only her amazing portraits but also the subject’s memory of pre-Partition India (​ Postcards from Home ​ , 2018). I was particularly amused by the cheeky representation of toilets as sexual rendezvous between gay men in a site-specific installation by four Indian artists at an actual public toilet (​ Geographies of Desire ​ , 2018). 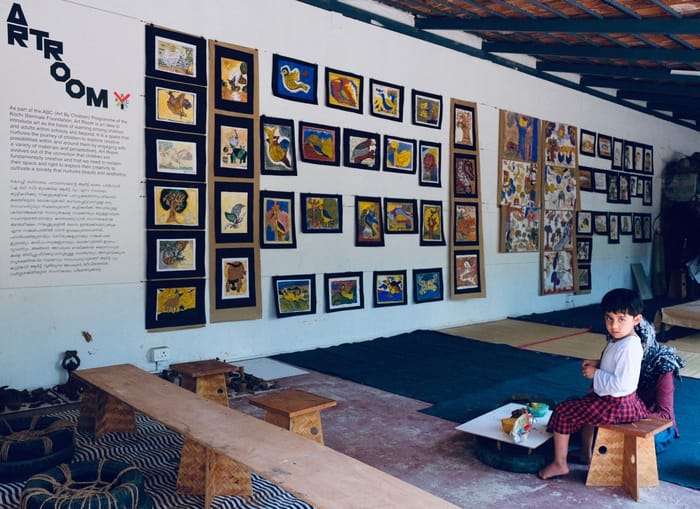 After the ​ Collaterals ​ , I visited two bigger venues which are Cabral Yard and MAP Project Space. Cabral Yard houses the ​ Knowledge Laboratory , ​ a multi-functional platform that hosts experimental and participatory projects. It was once a space for coir yarn factory, now it houses ​ Art Room a mong many initiatives. ​ Art Room is a pop-up art education model for children that will be established in regions of Kerala that are the most affected by the recent floods. 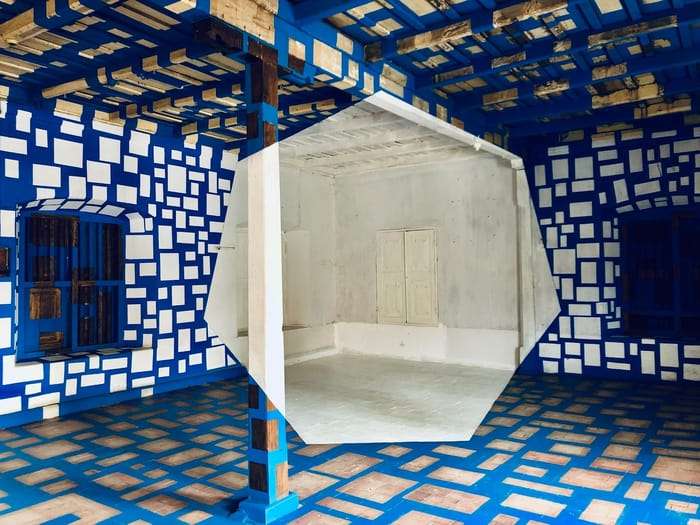 Site-specific installations displayed in MAP Project Space are one of my favourites, most especially French artist Georges Rousse’s paintings that encourage the viewers to step into his paintings. Inspired by the weathered, abandoned structures of the old spice warehouse, Rousse’s use of mathematical intuition created disjointed paintings that come together from a vantage point (​ ADAGP , ​ 2018).

I was convinced then that visiting all the venues will require at least three days as there are venues outside Fort Kochi (TKM Warehouse in Andamkulam, and Durbar Hall in Ernakulam). Begrudgingly, I reminded myself that it is my last day in Kochi. I decided to skip the bigger but farther venues, and headed to Jew Town area. Jew Town is Fort Kochi’s spice disctrict and also a historic reminder of its multicultural heritage, particularly as once it was the prosperous spice trading community of the Cochin Jews. I went there to visit some of the Collaterals ​ , but of course I made time to visit its quaint Paradesi Synagogue. There I took in the history of Malabari and Paradesi Jews in India while relishing on the intricately decorated synagogue. 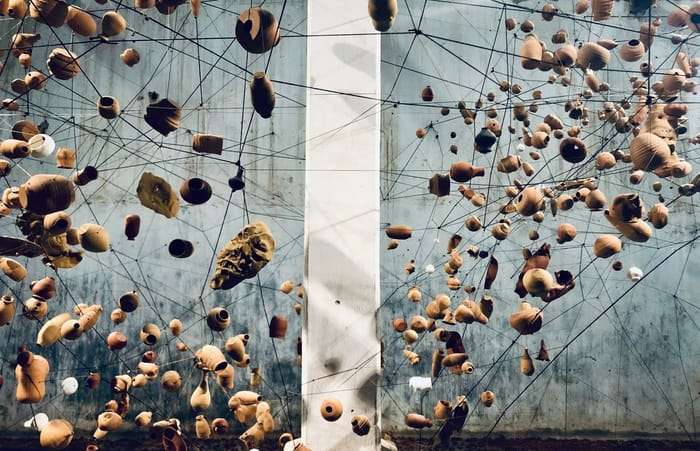 Then, I went to the exhibition ​ Thought is also a Matter, ​ the ​ Collateral everyone is raving about. The large warehouse that once was a spice storage now accommodates the wide-scale installations. There is a floating terracotta installation that occupied a whole ward by Indian artist Rajesh Kulkarni. The wind swayed the thin steel wires where the pieces are hanging and the afternoon light fell on the rough earthy surface, it was quite dreamlike (​ A Thought about a ‘Thought’ ​ , 2018). 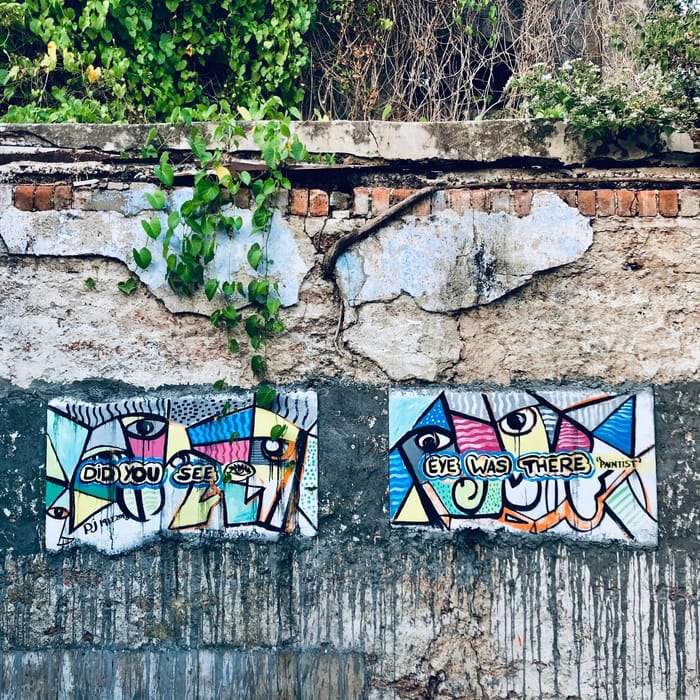 Most of the exhibitions closed at 5 PM, so I opened the map wistfully, knowing that the next venue will be my last. I chose one of the Students’ Biennale exhibitions called ​ Eye Spy . ​ As a part of Kochi Biennale Foundation’ educational initiatives, the Students’ Biennale reaches out to art schools and students all across South Asia to practice and exhibit on an international stage. Particularly in the ​ Eye Spy exhibition, the exploratory nature of student artists is evident both in the styles, materials, and its adjustment with the space and environment (​ Eye Spy , ​ 2018).

I stepped out of the venue feeling both satisfied and a little bit resentful. The only thing that kept me from kicking myself for having to leave Fort Kochi too soon is the fact that the last two days was well spent. This was my first trip to India, and what a wondrous introduction it was! Through art, I got to know about this charming town’s culture, people, history, architecture and so much more. My mind wandered back to that wall with the Biennale’ concept, ​ Possibilities for Non-Alienated Life ​ . I came to the country having no idea about the real India, so I am, essentially, an alien in it. Fortunately, it only took me two days of world-class arts, the smiling locals and exploring the beautiful Fort Kochi, to graduate from an alien to its ardent admirer. Sanju the driver was right all along, I missed Fort Kochi almost as soon as I left it. Also, I think Anita the curator made her case – the better and inclusive life is possible after all.