The Bikaner House in New Delhi has a unique exhibit on display. The Pichvais, that were once seen as a hand-painted textile hung behind the idol of Shrinathji, an incarnation of the Hindu god Krishna, can be seen holding their own as contemporary art.

The show, Pichvai: Traditions and Beyond, put together by Pooja Singhal relooks at and reinterprets the traditional folk art with unique interventions to create something out-of-the-box, that was once considered unthinkable. 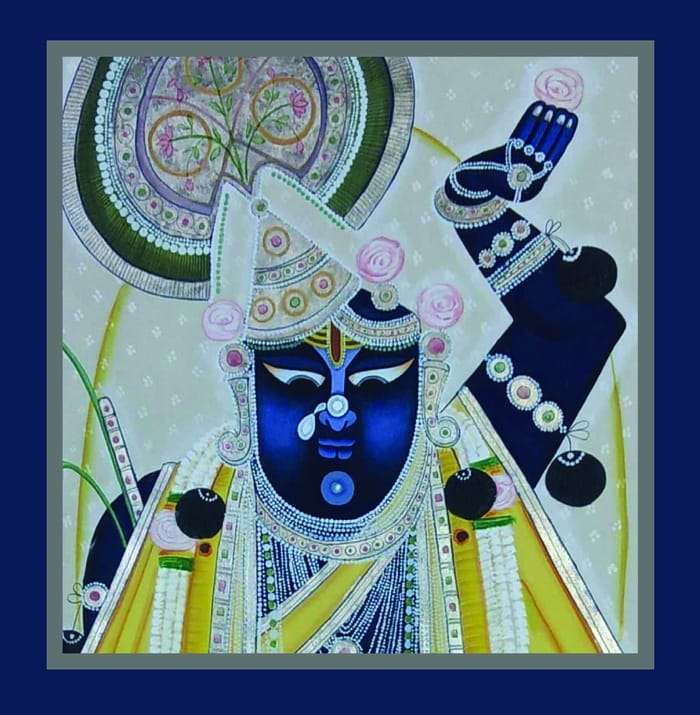 For instance, who would have thought that the lotus flowers that formed a backdrop in a traditional Pichvai could be used as such on a large canvas; or that the intricate temple complex depiction could be devoid of bright colours and painted in shades of grey or that each of the choubees swaroop of Shrinathji could be an individual painting in itself? But in the Pichvais, perceived, commissioned and curated by Pooja, the art form takes on a very contemporary and minimalistic form and challenges how the folk art must be viewed. 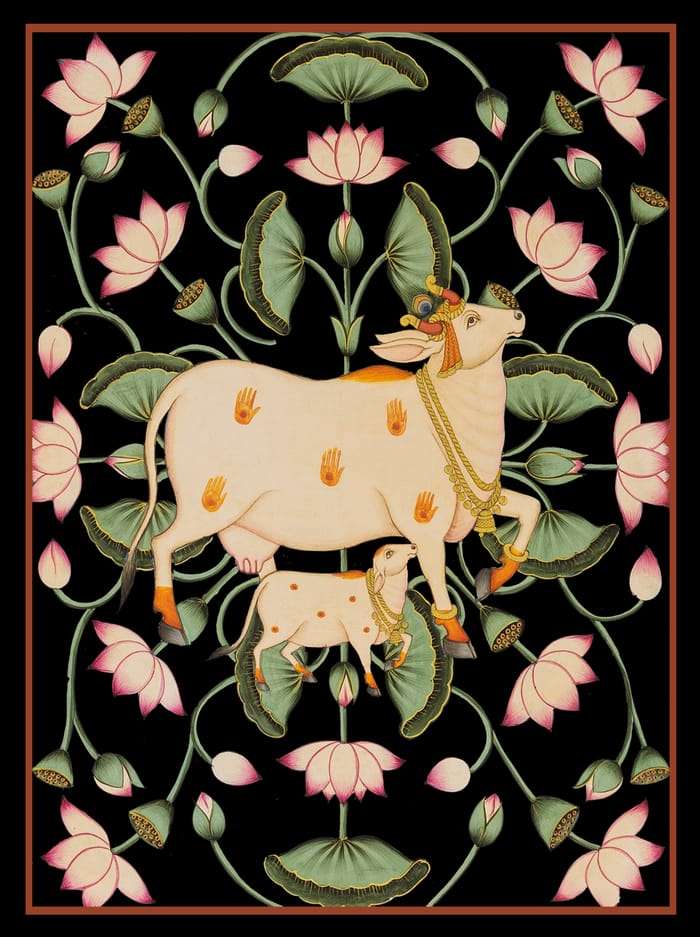 The show is fourth edition of the Pichvai revival series, titled Pichvai: Traditions and Beyond, put out by Pooja. The first exhibit was held in New Delhi in 2015, followed by a special presentation at Kochi Muziris Biennale 2016-2017 and the third at Famous Studios in Mumbai in 2018. Pooja, however, has been working on the project since last seven years.

For someone who grew up in a home full of art patrons and collectors, Pooja was privy to the challenges faced by the traditional and folk artists. Just as she was drawn in to the intricacies that the form called for and deep devotion for creating something associated with the revered. Over time, she found herself drawn deeper into the imagery and the motifs and was struck with reinterpreting the form to make it relevant to the times. 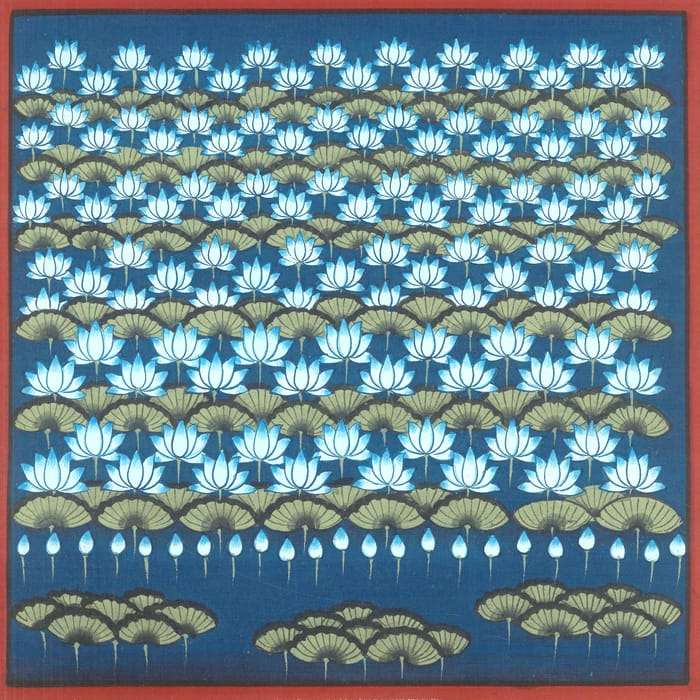 What was originally intended to be a revival project turned into one that she perceived to be relevant to the modern times. Her aim has been to create enough work for the artists so they are encouraged to keep the art alive and pass on to their younger generations. She worked closely with the traditional artists as a patron and introduced unique interventions in terms of colours, forms, sizes, subjects and presentation. She chose to simplify complex iconographies found in the original works and created a new vocabulary where they could hold their own in new avatars. 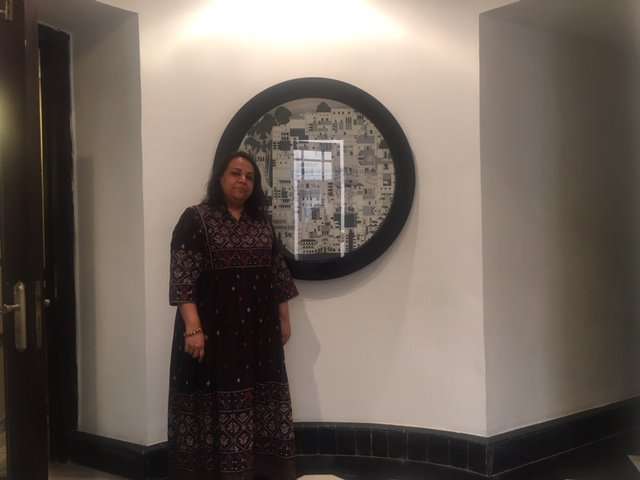 The exhibition is also a showcase of various styles that can be found in the pichvais – ranging from the traditional Nathdwara style, to a folksy Kota, to Mughal inspired miniature and Deccan inspired gold leaf intervention. Add to this is Pooja’s own interpretation and interventions.

According to Pooja, in the beginning, the interventions were minimal. Some came up because of necessities and others through accidental discoveries. It was later that she started playing with the format and began her experimentations. She created her own interventions playing with the miniaturization, decorative motifs found in large works and the deconstruction of the traditional form to extract the intricate, exquisite elements such as the cows or the gopis which were formed detail in Pichvai paintings. The chevron pattern with deconstructed motif of cows was a particular hit and she went on to create multi-canvas set for a modern home. 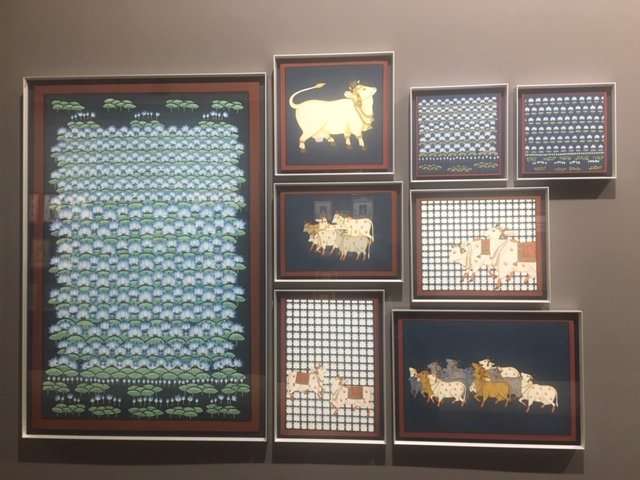 Interestingly, while the Pichvais take on a new form in this exhibit, nowhere does it move away from what the Pichvais originally stood for. The deeper spiritual meaning continues to run through the works – keeping it true to tradition and yet with a modern narrative.

The exhibition is on till the weekend. Do catch it.

In Silence the Secrets Speak