Art or Advertising – What do you think?

Pop art, an art movement that emerged in 1950-60s in Britain and the U.S.A., presented a challenge to traditions of fine art by including imagery from popular culture such as advertising and news. Pop art employs aspects of mass
culture, such as advertising, comic books and mundane cultural objects. One of its aims is to use images of popular (as opposed to elitist) culture in art. Pop art is widely interpreted as a reaction to the then-dominant ideas of abstract expressionism, as well as an expansion of those ideas.

Due to its utilization of found objects and images, it is similar to Dada. But, there&#39;s a major difference between both of them. Pop art is, what is going on in the media – perhaps mocking or showing off what people want to see (ex.a 100 photos of Paris Hilton – it is feeding our need for her in the media, but it also mocking our needs for her). Dada can be harder to define as; it has to do with anything being art (ex. urinal, pen, toenail, etc.).

Any art doesn’t have a definition without its leading artists, who explained and projected the type with their works, which became famous, gradually. Art is independent of artists but artists made themselves on the basis of their respective form and style of art, with their bicycle of thoughts and ideas; travelled through years to us. Among the early artists, that shaped the pop art movement were Eduardo Paolozzi and Richard Hamilton in Britain, and Robert Rauschenberg and Jasper Johns in the United States. 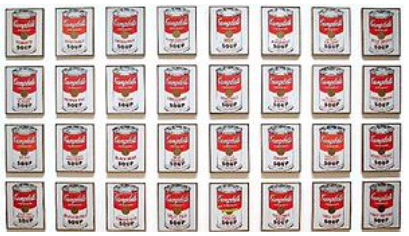 Andy Warhol created pop art icons, when he put Campbell&#39;s soup cans in paintings in 1962. Each consisting of a painting of a Campbell&#39;s Soup can—one of each of the canned soup varieties the company offered at the time. The individual paintings were produced by a printmaking method—the semi- mechanized screen printing process, using a non-painterly style.
Just to brief you about painterly and non-painterly style of art, painterly is a type in which brush strokes are visible and the lead curves of thoughts are made into drawings and sketches, clearly onto the sheets of canvas. Whereas, the use of non painterly style of art gradually increased as the style adopted the use of machines and mechanical techniques to outline the errors and defaults and repetition of work. 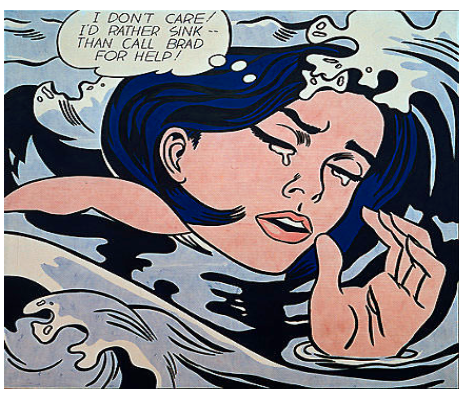 Considered a cornerstone of Lichtenstein’s work, Drowning Girl is sometimes also referred to as ‘I Don’t Care! I’d Rather Sink’. The printing method and the use of speech balloon to convey thoughts give the painting an appearance of a comic book page (1962). This is how artists like Linchtenstien, transform their sources to Pop Art Culture.
Pop art became popular around the world and now, an emerging art in developing countries like India, as well. Injecting the art into the booming industry of entertainment like Bollywood itself, the style was adapted to showcase the forms and acts of performances. 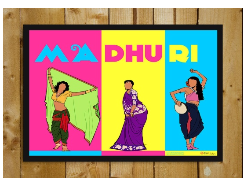 The countries, on the adaptation mode of Pop Art, are mixing it with the streams of their own culture to make it popular among everyone and give a new artistic view to the peeps!
Pop art definitely doesn’t twinkle with the same kind of glamour, it once did while it was rippling the waters of social progress; for a generation that filters their best Marilyn-esque pouting selfies on instagram to unrecognisable oblivion. After all, it was Andy Warhol, who famously said that in the future we’d all be famous for 15 minutes. Pop confronted art and forced pop culture into the art world’s snooty and exclusive game. It refused to shame the enjoyment of mainstream culture. It is defined as an influence of Art history onto the modern art, that it is today.