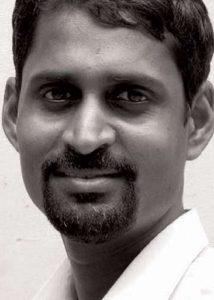 Arun Pandit’s recent exhibition of sculptures and drawings was held at Rabindra Bhawan, Delhi. The exhibition, which was curated by Uma Nair, sought to arrest ones gaze with the silent power of gesture. The show had some spectacular sentinel pieces which ushered in a new visual vocabulary. Some of his works appeared to be influenced by technical errors of the tech- savvy society which showcased images that are blurred in the light of internet frustrations and experiences. For Arun, the internet experience is a kind of disorientation which is the beginning and the end. And in that way, it’s like a closed question, that operates in a  basic perceptual textbook in the human psyche which also tells the reader, “You see the image one way, and if you turn it in space then it becomes different experimentally.’’
As Nair puts it: The combination of moulds and sculptural casting in his oeuvre creates spaces and allusions that far transcends the relation between viewer and object. In the bull error work everything appears to split open the illusionary divisions; the multiple layers stand in a specific relationship, developing a network of perceptions that take shapes beyond the viewer. Here deformation has taken over a considerable part of the figuration.
Cultural Hybridity
Pandit creates humans who are hybrid in their  moulds. He explained: “We live in a world that is constantly on the 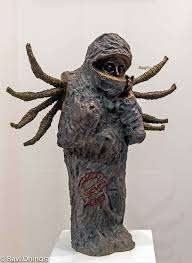 move. People move between places and cultures either as immigrants, refugees, workers or a tourist. Further with technologies such as television, radio or internet we can be virtual travelers to almost anywhere, at any point of time. I think our entire hours of day now are spent on the internet and it has changed our lifestyle. Speculations and market movements are also so internet driven and we are moving between illusion and reality. As a contemporary artist I have experienced movement between and among cultures in my life, and my work often explores issues of personal and cultural identity”.
One of his work titled – ‘She’ depicts a woman wrapped up inside closet. She has spider legs behind her showing cross breeding of two separate entities. In this work, ‘She’ embodies both myth as well as reality of sadness that fills the life of women all over the world. The medium of bronze also created a different, more visceral engagement. We can sense the hollowness of life-size bronze sculpture as similar to our own bodies and comprehend their thin metal as a kind of skin.
Human expressionism 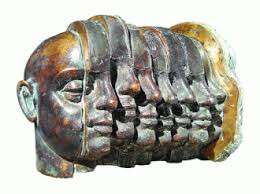 In one of his works, ‘The mask seller’ a luscious double entendre fills the colorfully abstracted human landscape in which the artist argues for a reconsideration  of human expressionism. For Pandit, his kind of art is created as one of the major symptoms of what’s wrong with the age. The disintegration and the disappearance of recognisable images in painting and sculptures are supposed to reflect a disintegration of values in society self.
The takeaway from his show, is that Hellenistic artists didn’t leave the realist sculptors of the future much to do, and  virtually no one after them used bronzes ability to conjure skin — and the emotional states contained within — to better effect.

Five offbeat museums you should visit in India