On the World Environment Day, young artists Gargi Chandola and Yaman Navlakha had painted a mural near Nehru Place Metro Station, which depicted the story of marine pollution due to plastic. A crowd-funded project and supported by the local councillor, the mural attracted a lot of appreciation for the thought it expressed and is already a landmark in the area.
The duo is also the brain behind the art collective ‘Post-Art Project’ — a space where artists collaborate to transform public spaces. In a freewheeling chat with ACF, the artists share about their collective and their approach.

How does your personal history relate to the art you produce?
Yaman: It can be subliminal. I personally don’t know if I draw something connected from my past, I never try to do it consciously. The only thing that happens is one learns from his previous mistakes and try not to repeat it.
Gargi: I think, it goes back to my early childhood when I used to paint the walls of my house with charcoal. I used to get reprimanded for the same. Certainly, over the years, I got attracted to the Indian art forms and started drawing illustrations with patterns so that I could create visual imagery of things I have seen over the years.

How is your approach to art different from others?
Yaman: I won’t go into the method but I think we are hands on everything we do. Two of us try to cover every aspect of our work by being collaborative. We are constantly aware of what’s happening. I do think that is what makes it us different from others.
Gargi: Also, I would like to say that we are not shy to put our hands into any project. We try to explore and are keen to know all about varied art forms. We like to learn from all the micro and macro elements involved in the art form. 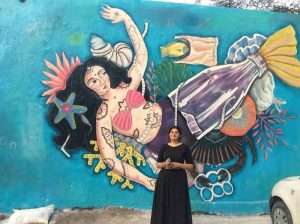 Tell us about Post-Art Project and where do you see it in the future?
Gargi: We have built this project for various art forms, like filmmaking, poetry and performance arts. Where people could come and express themselves in a creative environment. Also, where they could interact with their respective communities.
Yaman: Our prime motive is to create a space for the local artist from different communities to express themselves more openly. The people who practice their art, but can’t reach a bigger platform need a bridge to connect them to a larger audience. So, we would help them in bridging the chasm.
So, it’s a good news for these people.
Both: – (Giggle) Hopefully, it is.
How did you learn mural painting?
Gargi: We worked with house painters initially and also people who are skilled in miniature art from. For instance, people who paint signboards or who do calligraphic paintings and various other things.
Yaman: It is what we learn from them. It is where we educate ourselves on mural paintings. Gargi on other side, very copiously follows and reads about street art movements and is much more educated than me on that. 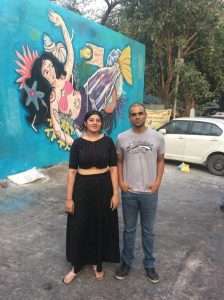 Which is a recurring motif in your artworks?
Gargi: I have started using some motifs from the folk art and body tattoos to tell stories more appropriately. So, that’s one common factor you will find in my work.
Yaman: Also, you would find vibrancy in our colours, even if choose to paint with dark colours. We try to keep the paintings vibrant and make it our constant effort.

If a wall has a rough texture will that affect the painting?
Gargi: -As artists, we use certain types of colours that are made particularly for these kind of walls. These colours, for instance, get soaked easily and leave their imprint as normal colours would on a basic kind of a wall. The mural takes certain kind of form on rough texture.
Yaman: – It once happened that we had to deal with a wall which was in a bad condition so we had to paint on aluminium sheets/ ACP sheets. So there we used a different kind of paint. So, our medium sort of changed a little bit according to the condition of the wall. Ultimately the end product should be one which reflects the surface of the wall. 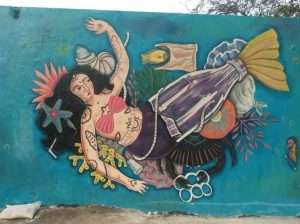 What would you like to explore next?
Gargi: I would like to explore male nudity because there are several works done on female. Very little work has happened on males.
Yaman: – For me, the only thing one gets stopped from doing is one which is considered a taboo. But the instinct always tells to do something around it. I think, artistically, we are fortunate enough to explore more and try to express it with clarity. Politics is one thing that I would like to get myself involved in. We are a politically correct generation and deep down we are all fighting certain urges that need to be expressed by an artist.

I have never curated something as large as Chennai Photo...