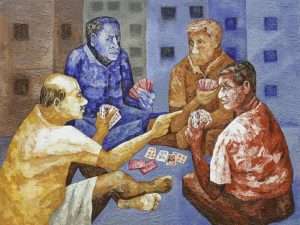 A writer with an accomplished career in publishing behind him, Ranjan Kaul is a self-taught artist, who started painting very early in life. For years, he nurtured painting as a hobby, selling his works only to closed groups, till now, when he has taken art up as a full-time engagement. 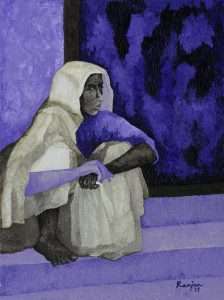 The treatment in Ranjan’s paintings is layered – abstraction and simplification of form with the use of varied hues and often heavy and cracked surface textures, suggestive of the abject lives of his subjects. The backgrounds in his compositions are often muted to emphasize form. The texture, he shares, is reflective of the lives his subjects lead. “Because inside, they lead cracked lives that are frayed and complex at the edges,”  he shares.

Additionally, the human figure in his works is integrated with the background, the living, and non-living melding together as it were. The postures in his works, sometimes awkward, reflect the nuances of human emotion. The characters on his canvas are animated, often expressing themselves and sometimes making conversation with their eyes.
In terms of colours, he looks for hues that reflect the mood of a situation or a scene. It is not unusual to find him breaking the scheme just to bring the attention of the viewer to the state of his characters so their plight does not go unnoticed. Waiting is a dominant theme in his works — be it waiting a customer, a family member, water or as he says, Godot!
His first art exhibition comes up in November 2017 at New Delhi. 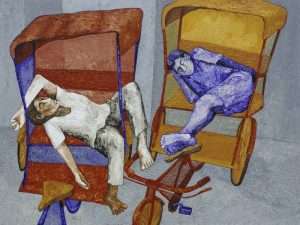