Dancer, choreographer, film and theatre actor, Revanta Sarabhai is known for being one of the few male Bharatanatyam dancers of this generation. He is the son of famous dancer and activist Mallika Sarabhai and grandson of the late legendary dancer Mrinalini Sarabhai. Revanta continues the rich family legacy by heading the art education activities at Darpana Academy of Performing Arts in Ahmedabad. He looks at the traditional form of Bharatanatyam through a relevant perspective.

Revanta shares an insight into his childhood days, challenges and his upcoming choreographed performance at Royal Opera House. 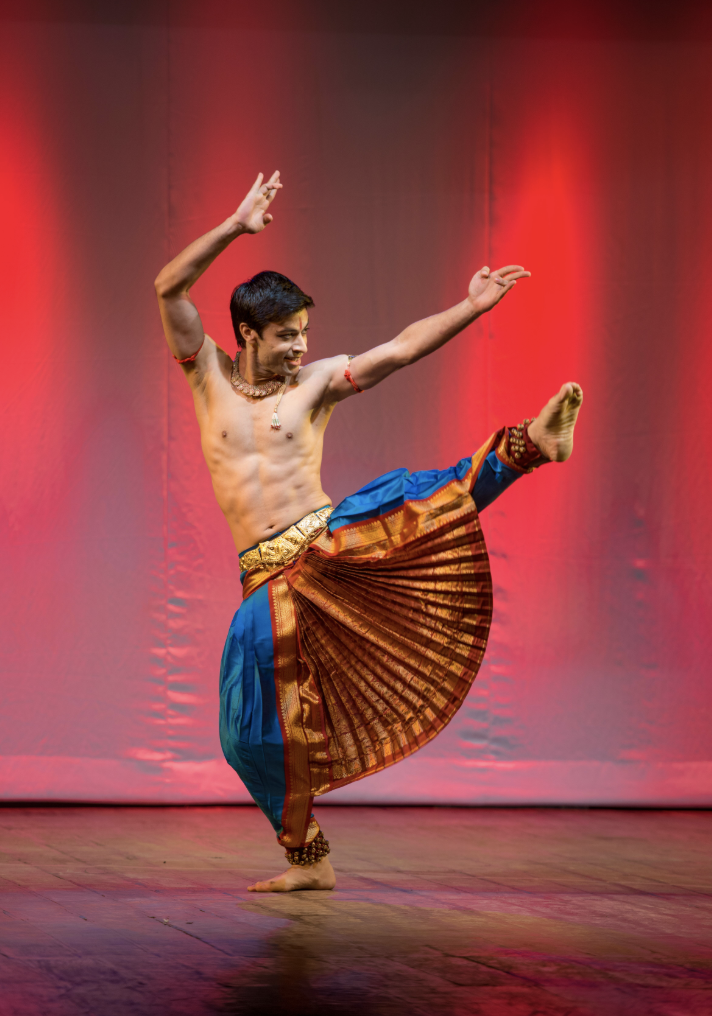 ACF: Please share a few insights into your foundation. How did you get influenced by Bharatanatyam?

RS: My mother did not go to a hospital to give birth to me. I was literally born on the campus of Darpana Academy of Performing Arts which was founded by my grandparents in Ahmedabad. I clearly remember waking up the sound of wooden stick hitting block used by dance teachers to beat the rhythm. I had to physically cross the dance floor to go to school every day. All through my growing up years, I was surrounded by hundreds of young girls who came regularly to the campus to learn music, dance and theatre. It was completely inescapable for me as I grew up in this environment. My grandmother and mother were thrilled when I approached my mother at the age of four expressing my desire to learn dancing. I was also strongly influenced by some of the strong male role models in my mother and grandmother’s troupe. I started understanding classical dance forms at the age of eight and the seriousness started coming in. I started performing on stage. When I was 14 years old, I was very sure I wanted dance to be an integral part of my life.

ACF: Were you ever challenged by your friends and peer group?

RS: Yes, of course. A lot of them had a very strange kind of curiosity and they had formed a general perception as to how a male could perform Bharatanatyam. I used to invite them to watch my performance and other male dancers once and it helped shatter their preconceived notions. All it took them was one exposure to a dance performance. To some extent there is a much wider acceptance of men doing classical dance.

ACF: Being a male in a woman dominated field, have you ever felt any pressure?

RS: My gurus constantly reminded me that you are a man and dance like one. I am thankful that I have seen some of the most masculine male dancers in my grandmother and mother’s group. This comes as a refreshing change to many people. The best feedback I have got after a performance is “Wow you are so graceful and masculine at the same time.”

ACF: When and how did you get this idea of using dance to communicate awareness of social issues?

RS: Traditionally Bharatanatyam has been used to communicate mythological tales and religious ceremonies. As I started performing for a diverse range of audiences, I gradually started questioning the relevance of age-old stories described in Bharatanatyam. Since then I have been continuously building up my repertoire to tackle themes more relevant to our society like climate change, globalization, redefining gender roles and long-distance relationships. My grandmother in late 1940’s used Bharatanatyam as a tool to narrate socially impactful stories such as deforestation and destruction of environment, dowry and its evil impact on women. It was so contemporary in her time to think of these issues.

ACF: What is the relevance of the title “In the Shadow of the Gods?” Please elaborate on it and its significance in daily life.

RS: Traditionally over the last many centuries Bharatanatyam has been used primarily to narrate mythological tales and stories of Gods and Goddesses. Bhakti has been one of the most prominent themes and the dancer is always portrayed as a devotee, primarily religious and spiritual themes. I barely ever went to a temple as I grew up in a family that was not religious. Throughout my training as a classical dancer I did learn pieces of Shiva, Krishna and Rama which are the primary content of classical dance. I have been developing new pieces that stay true to the classical structure of Bharatanatyam. At the same time I am continuously exploring contemporary themes relevant to modern times without diluting the traditional style of dancer speaking to the God. In my pieces God’s presence is integral to classical dance but not in typical dancer-devotee form. Hence the title ‘In the Shadow of the Gods’.

ACF: Is there anything new that you are bringing in this show?

RS: I am presenting a brand-new piece at Royal Opera House. It is about a traditional Tamil song in Bhakti tradition, Varugalamo, which is from the perspective of a Shiva devotee, Nandanar who is an untouchable. Nandanar being a devout requested Lord Shiva, “O Shiva may I come into your temple?” As the story goes by, he is lauded by the people for the fact that he is such an immense Shiva Bhakta and he continues to pray inspite of the fact he cannot enter the temple. Here nobody questions this practice of caste divide which is discriminating.

I have created a contemporary interpretation to this song from Nandanar’s perspective. I am performing it in its original form but there is a new ending to it which I have created and added a small twist to the main line of the song. Here Nandanar turns to Shiva and questions him in the same Bhakti format, “I have been singing this song for a thousand years. In these past centuries the entire world has changed and yet my people are still discriminated and exploited and considered outcast. May I be allowed into your temple? My position is still the same. My kin are still not allowed to visit the temple. Perhaps its time for you to come and change this.” This is one example of how I am using the classical form of dancing to very firmly make them relevant in today’s context. 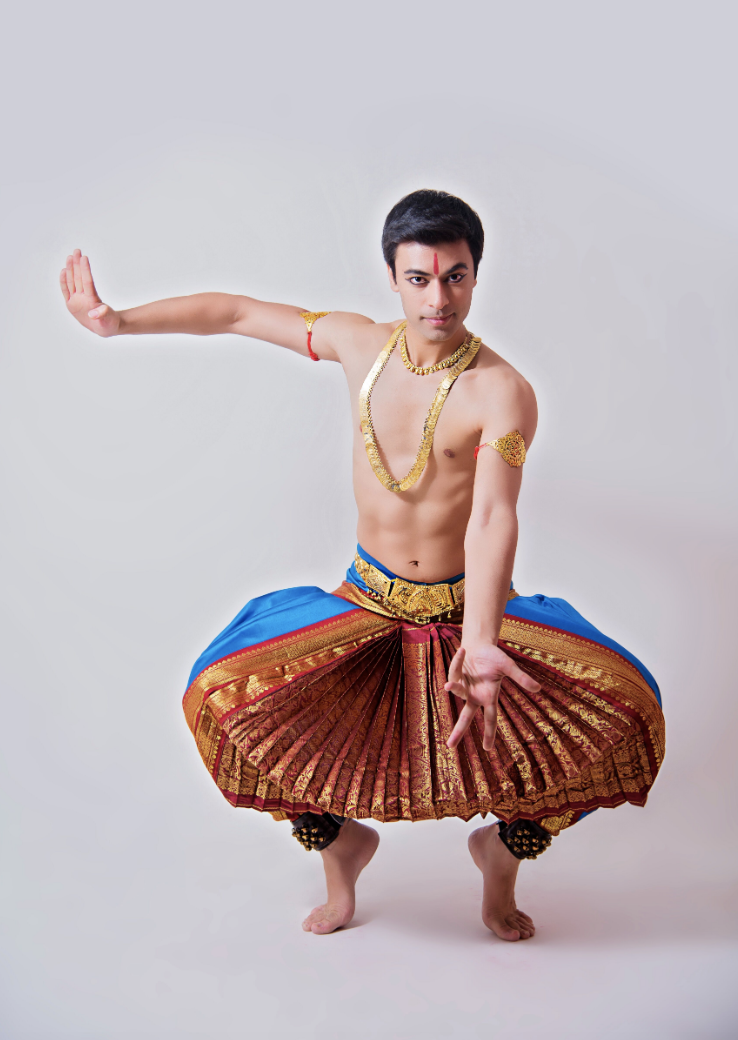 ACF: How is this show a tribute to your grandmother and how do you plan to take it forward?

RS: For now I am looking forward to performing at the Royal Opera House on May 9. My grandmother’s 100th birthday is on May 11. I am celebrating the day by giving a talk at Dr. Bhau Daji Lad Museum where I will be talking about historical concepts of classical dancing and new innovations that I am involved with. There can be no better way to celebrate the legacy started by Amma in mid 1940s. I am touring across the country since the beginning of this year with my new pieces to mark the centenary year celebration of my grandmother using the traditional form of Bharatanatyam as a vehicle to put forward my ideas and tell modern stories relevant to our society. After my performance and talk in Mumbai, there are many shows lined up at Baroda, Kolkata and Delhi. Its very important to discuss my perspective with different sets of audiences.

RS: Traditional and contemporary do co-exist. Classical dance is as popular as always. It will remain relevant and fresh if we keep bringing in new ideas and innovations.

ACF: The best compliment you have ever received.

RS: An audience feedback which has always been so heartwarming for me “Having watched your performance, my entire perception has changed.” Sometimes mothers come and tell me that they forced their sons to watch my show, they enjoyed the performance so much and now they are keen to pursue classical dance.

In the Shadow of the Gods: An Interpretive Performance by Revanta Sarabhai