This year 17th August marks the 73rd year of Partition in India. Pakistan, India and Bangladesh each remember Partition differently. Ekatmata Sharma reflects on partition as received by the art world in 21st Century, as she shares the museums and artists who have thoughtfully curated their family histories related with partition and others who have been touched by it in one way or the other.

Seventy three years ago, the Indian subcontinent was divided by its British colonial rulers into two nation-states – India and Pakistan. The Partition sparked three wars, paved the way for the creation of Bangladesh, and transformed Kashmir into one of the world’s most militarised zones. It is the single most defining event in the history of the region to this day. Punjab, which was one of the two states physically divided by the new border, the Partition is interwoven into the very psyche of society. It is part of the collective memory, state discourse, and family histories. There is no escaping what happened there all those years ago. But today, the Partition continues to be imagined and reimagined constantly across borders and even within the same nation. Indian artists who have a personal journey connected with partition and the ones, who have been inundated by the sheer stories of the partition, have come forward to share their outlook on partition through art.

Established as a People’s Museum, the Partition Museum endeavors to depict the Partition as it was experienced by the people. One key aspect of the collections comprises the artefacts generously donated by Partition Survivors and their families. As people were displaced, they carried with them whatever little they could, and these objects are now not only important milestones of the events, but symbols of losses suffered and trials endured. The uncertainty and confusion caused by the sudden division of the country often gave people no time to be able to gather their belongings before walking out of their homes forever. The artefacts received by the Partition Museum include things that were of practical use brought across by people along with those that held sentimental value for them. From utensils, trunks and clothes, to a wedding sari, a jewellery box and a tin box, the Museum houses artefacts of the Partition belonging to people from diverse and different backgrounds.

When artists recalled the horrors of Partition, they often expressed their emotions by painting, but as Krishen Khanna states, “We were able to do it only much later. At that time saving our lives and escaping was most important.” Satish Gujral recalls going back and forth across the border escorting refugees to the other side. Gujral only later understood and came to accept that his art was deeply influenced by the traumas of Partition. S.L. Parasher, a man whose art is known for its strong lines and the clarity with which he expressed motion, worked and lived in many refugee camps before he went on to rebuild his life. These artists painted the trauma of the time. While their works of art are extremely distinct, the themes they paint are similar. The Partition Museum, in its attempt to provide a holistic view on how the division of 1947 affected individuals, houses limited edition reprints of paintings from these three artists as well as a provocative and deeply moving piece by Arpana Caur titled “1947”.

Led by the Chairperson, Lady Kishwar Desai and a Trust (The Arts and Cultural Heritage Trust), the museum opened in October 2016 with a curtain raiser exhibition, and all 15 galleries were opened on August 17, 2017. Spread over 17,000 square feet in the historical and grand Town Hall building, the Museum uses multiple different mediums to create a world-class engaging experience for the visitor. This includes oral histories playing on video, a soundscape in each gallery, original artifacts donated by refugees, newspapers, and magazines, photographs showing the migration and camps, letters written by refugees, government documents, and especially created art installations.

Seema Kohli
Seema Kohli’s “Retracing Paradise, The Word For World Is Home” performance was born out of her father’s autobiography ‘Miter Pyaree Nu’, an unpublished work in Khadi-Boli, which will be published sometime around September this year. While working on the book, for the past nine years, Seema was quite inspired by his childhood stories, from Pind Dadan Khan, a place where her ancestors had lived for eighteen generations. “I want to ask people what they understand by the word home and how far can they go, by creating boundaries and divisions. You have to believe it at some point of time, that we all share that one single space, from where we are coming — the unified consciousness which is called home,” in her words, she tells about the performance. “And while I paint the stories of boundaries, partitions of lands, waters, rain, sun, moon, and skies. Of the relationships of people, cattle, trees, home, and love; I wander off into the forgotten lands of my parents and ancestors with an ache of nostalgia. As you see I have worked on the imagery of air, rain, sun, and moon and of course land. We all share this bounty of nature why these boundaries. It’s all about a home called the world.”

Through this work, Seema evokes an era where the people, the land and their relationships and professions, all were inter-related. The title “The Word for World is Home” is inspired by Ursula K Le Guin’s novel “The Word for World is Forest” and binds together consciousness with inhabited land. In her performance, Seema included verses sung by her father during his childhood days, some anatomical designs that he has drawn from his books, that are about 100 years old, and also tried to understand the herbs, which her family used as they were Hakims. In addition, she bought some brassware, which was used at that time. She showcased the performance at Kolkata Center for Creativity in 2019.

Manisha Gera Baswani
Manisha Gera Baswani’s “Postcards from Home” traverses borders and brings ‘home’ the artist photographed. It features 47 artists, a figure chosen for the year of Partition, 25 from India and 22 from Pakistan, all photographed by Manisha in their creative spaces over the last few years. All artists have a past with Partition personally or through family. They have shared the tugs their heart feels when they remember the ‘home’ they lost.

Manisha’s parents have experienced partition- first hand. Her parents were born in pre-partition Pakistan and she grew up with stories of their “home away from home”. Seeing them age, she took upon herself to preserve the history that they lived and contribute to the stories that she grew up listening to. It was an honest attempt at exploring the shared memories of artists and their families who have a common connect with the times before the Partition of India and Pakistan in 1947. Manisha started photographing artists in their homes, in their studios, sixteen years ago. The conversations that she had with the Pakistani artists made her realise that a majority of them had roots in India, or the Partition that cut through it. Indian artists who are part of the project were Satish Gujral, Vivan Sundaram, Bharti Kher, Krishen Khanna, Monica Narula, Zarina Hashmi, Nilima Sheikh amongst others. She has showcased her project at Lahore Biennale 2018, Faiz Festival 2018, Kochi Biennale 2019 and India Art fair 2019.

Puja Puri (Shrine Empire)
Puja Puri’s work explores an obsession over Colonial history and its aftermath in the region of South East Asia, India-Pakistan in particular. A search for her lineage – through childhood memories, warm discussions with her favourite aunts and uncles unearthing family links, trysts with Partition and with pre-independence British influence, an amalgamation of places, cultures, bloodlines and even religion.

Puja Puri’s lightly scribbled landscapes seem delicately ephemeral like dandelions dehiscing at a touch and dispersing on the wind to deposit at whim as other forms at other places. By assuming this disintegrative quality, the works appear to unravel the fabric of eternity that composes landscape paintings. While closely studying the cites of certain ruinous temples and Gurudwaras in Pakistan, the artist deliberately chose to meld these ruins with their purlieu not only to emphasise the impermanence of landscapes calling into question their naturalising function but also to highlight the luminous glory of the land that doesn’t require any human markers for its embellishment. 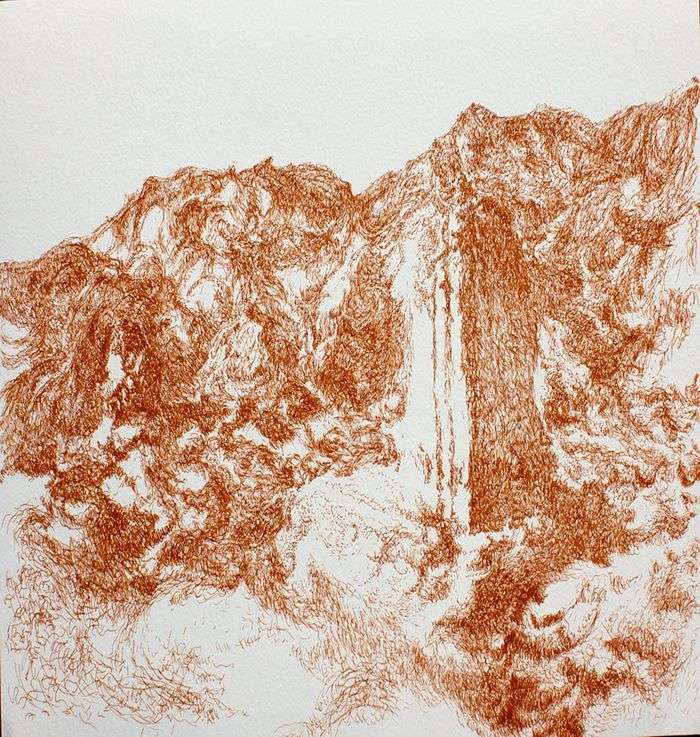 Samanta Batra Mehta (Shrine Empire)
Samanta Batra Mehta’s is an Indian artist living in New York for over a decade, her work obliquely alludes to issues of dislocation and migration. Her pictorial vocabulary often has elements of the human form intertwined with that of nature. Nature/landscape is seen as a metaphor for the body (and vice-versa) and as a site for germination, nourishment, degradation, trespass, plunder, colonization and transgression. Her artwork is a commentary on the human condition and the environment we inhabit. Themes in identity, personal history, gender constructs, social order and colonial history are depicted and debated in my meticulous, complex artistic interventions that employ the use of drawing, found objects, text, photo and installation. In a contemporary re-imagining of the ‘exquisite corpse’ genre, she oftentimes re- purpose collected antiquarian objects, imagery and text along with her own drawings to render an altered visual engagement. She is influenced by the confluence of the natural world, mysticism, history, society and politics.

One of her works “Anthem” showcases Vintage postcards from India, circa 1945-1950, collaged images from antiquarian books. She found these vintage postcards dating back to 1945-1950, sent during the time of the end of British rule in India and the Partition. On these she collaged imagery of the human nervous system culled from antiquarian medical journals. On some of the postcards she has collaged the first paragraph of Nehru’s ‘Tryst with Destiny speech’. Cast against the backdrop of political history and the history of the nation are millions of untold stories of the time- her work aims to retell these untold stories– wondering who these people were, what their situation was, what their stories were?

Archive of Mind at the