It’s never wrongly stated or said that art still exists, in every corner of this diversified world of mimicry, set on the stage with audience; almost everyone. Today not only art, but almost everything is taken on the social platforms to prove the existence of talent, which is a good thing but whatever happened to “talent hunt and search”; seeking is easy now. A rational pattern in people has made it obvious for creating or improving one’s talent. Without proper training or minimum number of experiences, people do find their talent and pursue it for long, for their entire life. Their dedication is in the purest form, like honey from the hive itself, and the destination becomes equally sweet. He belongs to a similar kind of background, and thinks that it’s not hard to ‘art’.
On being asked, “Is it hard to hold your passion for long in this new world? Isn’t it hard to earn with such bit?” by one of his ‘fan’ at this exhibition at Triveni Gallery, Delhi till 25th May’16, he spoke about his feelings towards his passion and how it wasn’t his dream to be where he stands today. He said, “It’s not easy to earn in the first place, but I’m doing something which I can do without getting enough of it, every time I use my mediums to paint the canvas with the visuals in my head. Unlike those who couldn’t follow their passion, for some or the other reason, I’m in love with my art. I don’t do exhibitions just to earn money, but to communicate my thoughts to everyone who look at the frames, which were just blank spaces before.”
While discussing about his life and background, from childhood to his present life and situations, we had an amazing conversation with him and learnt about new aspects of his life. He has already dedicated 20-25 years of his life towards his passion for art, he holds but before that, he didn’t even know that he’s going to pursue with this. After doing Psychology Honors from Lalit Naryan Mithila University in 1999, at Darbanga (Bihar) where he belongs to as well, he did M.F.A. and B.F.A. (Painting) from I.K.S. Vishwvidyalya at Khairagarh in 2007  and got a Diploma in Painting, Chandigarh. As he carried on with his story, he was able to connect the dots of questions, that I was going to ask or have asked already. In between the gap of those years, he did a learning course from his ‘Guruji’, in Bihar itself. And that course, went till he got his degrees and actually started working. His first art gallery was at his hometown only, from where he started his journey and is thankful for all this to happen. In his words, “It was not so easy to make this happen but once everyone started appreciating my paintings and art, I was stronger then, to stand and walk out of my hometown, and shift to one of the busiest cities of Asia, Delhi.” Since then he hasn’t looked back and kept on with his track and pace. The highest cost of his paintings have reached to the level of 1.5lakhs in 2015 – a painting with seven horses which showcased different elements on this planet, and at this recent exhibition, the paintings ranged from 40,000-50,000 each. Till now, he has done around 15-20 group exhibitions and it was his third solo exhibition
– “Water Life” at Mandi house, Delhi on 25th May’16.

“The wide river and its endless surprises, full of life and adventure that’s my life.” 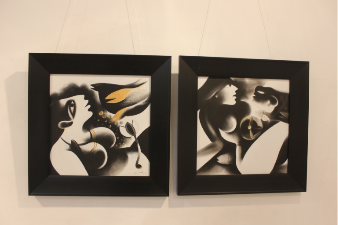 Sounds simple to paint about water, but is risky to keep it as the main theme because water and its medium are the most basic themes. But it was different, his paintings didn’t even have a tinge of any of the blue shade. The frames of the painting was in black color and so were the figures. It was a monochrome palette with women and aquatic life, with yellow shades in some of them. It wasn’t difficult to understand that the frames were depicting a connection between those women and the flora part. He decoded his art in his words, with a mix of his childhood and life, as follows: “It’s water, something that has been a major part of my life. I belong to a fisher family and from the webs of fish nets to market with dead fishes on sale, I have seen it all. We used to spend our half of the day at tube-wells and then on boats for fishing, while looking at all kinds of fish, used to trading. I have seen the life of “Makhana”, how it feels cold in cold water and how it is been given pain, in summers. It was sort of a lesson for me, how it bears in both the conditions, and still swims around. 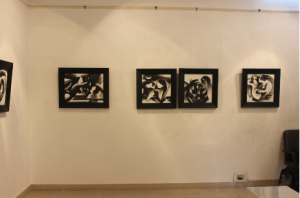 This exhibition is based on the part of my life, where I stood in water and around fishes, and observed and absorbed.&quot; What is that you want to say, or rather inspired you for them? (There were mermaids painted in some, and women in some)”The theme, the connection between ‘makhana’ and women. Because I feel that women are somewhat on the same base, they bear and still let it go, or surrender themselves. My paintings are giving out a positive impact to the perspective of life to people. The yellow shade you see, in some of them, is the energy that is based out of them. There is a connection between both of them, what I have learnt from the aquatic life and tried to incorporate it in the paintings with humans. I believe that color can never define the meaning of this Earth. I share a special and deep bond with the five elements on this planet, and water is one of them.”

Santosh Kumar Sahni, is a modern contemporary artist, based in Delhi now. He is simple man, who has simple principles to ride by, on the bumpy ride of his life. As he says, “endless surprises”, he seems to have prepared already for it and his childhood, has left a strong impact on his decisions, he take today. He believes in his colours and his passion, keeping up with the upgrading world. One could see enthusiasm on his face, filled with satisfaction and joy. His life was right in front of us, and he couldn’t get enough of it, himself. He told everything about his parts of passion, teachings – he received and learning – he distributed. A warm person, on his way to convert this world and not change, but convince through his palms of art.
Link to his blog:
http://art-santosh.blogspot.in/
Link to his Facebook Page:
https://www.facebook.com/Santosh-kumar- Sahni-478556368951347/?fref=nf
Read about Affordable vs Emerging Art here