With the festive season of Dussehra and Diwali round the corner, it’s once again time to immerse yourself in the grand spectacle of ‘Shri Ram’, the annual dance-drama depicting the Lord’s life presented by Shriram Bharatiya Kala Kendra.
The two-hour-long production, directed by Shobha Deepak Singh, vice chairperson of SBKK, is now in its 61st edition and has gone from strength to strength in the last six decades. Presenting an amalgamation of core values that reflect the emotions of devotion, loyalty, endearing family relationships and respect to elders, the life of Ram is a medley of allegories which provide the foundation of a metaphysical way of life. 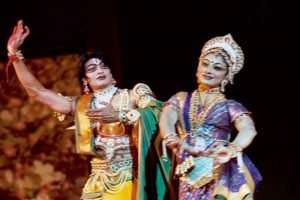 Whether it is Ram’s obedience of his father, his unflinching denial in the face of adversity, the mirage of the golden deer, his ability to transcend barrier of caste and creed by accepting Shabari’s fruits or Hanuman’s determination to make a gigantic focused leap – these are all emblematic of the way of life which form a part of viewer subconscious.
Says Shobha Deepak Singh, Director of the ballet and Vice Chairperson, SBKK, “It is the Kendra’s attempt to excavate the layers and realise the inner meaning and message of Ram. This year, we have added many new elements to the production to keep it fresh like every year. All new costumes, handmade jewellery, more elaborate sets and brand new choreography, all will bring together yet another memorable experience for the viewer.” 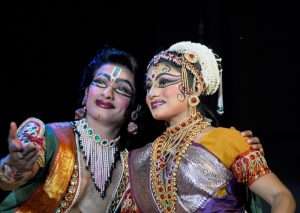 For instance, the episode of Sita’s Agnipariksha has been made more elaborate with greater emphasis on the travails that afflict even modern day women. Another episode featuring Shurpanakha and Ravana deals with the spiritual and learned aspect of Ravana’s personality as he muses that it would be indeed be an honour to be killed by Lord Rama. “We have always perceived Ravana as wicked and someone who is screaming and edgy, but we are portraying him as a poignant character full of reflection and knowledge,” says Singh. Hanuman’s mighty jump across the ocean to reach Lanka has been also treated metaphorically through dialogues that reflect on the values of determination and courage.
Another new episode is Ram’s Shakti Pooja, a touching episode where Ram, in search of the missing 108th lotus flower that needs to offered to Goddess Shakti, begins to remove his own eye (as he is known as kamal nayan) before the goddess stops him.
“What’s also new this year that we are making elaborate accessories like belts and headgear (mukut) out of jute mats (chataai), the way it was done in the initial years of the Ramlila at the Kendra,” says Singh, “we wanted to go eco-friendly.”
Other important episodes are about the genesis of Ramayana (Kraunch Vadh), Ram Janma (Birth of Ram), Ahilya Uddhar (Ahilya’s emancipation), Swayamvara (Sita Weds Ram), Kaikeyi Vardan (boon to Kaikeyi), Swarna Mriga (golden deer) amongst others.
(At the SBKK lawns, 1, Copernicus Marg, New Delhi from September 21 to October 17, 2017 at 6.30 p.m. daily. Tickets are available at SBKK priced at Rs 200 to Rs 3000)

‘Kaalpadukal: Songs of the diaspora’; Audio Visual Exhibition curated by...