There is a certain charm in the old. There is a reason why all that is classic or traditional stands the test of time. What one finds even further interesting is when classical boundaries are extended within the tradition. Susanskriti an effort by Sangeet Natak Akademi and Helen Acharya, to bring the finest of talents under the same roof presented Odissi dancer Nitisha Nanda and seasoned Bharatanatyam exponent Dr Sridhar Vasudevan for this particular evening.
Nitisha clad in all white began with a Managalacharan, Veena Vadini Varde choreography of Guru Sharon Lowen ji. Based on raga Hamsadhwani in ektali, originally a poem written by Kavi Suryakant Tripathi Nirala, the poet calls out to Goddess Saraswati to bless the new Bharat. He asks the goddess to tear apart shackles of darkness and let the river of light flow with a new voice, new song and freedom. This afresh a treatment of a traditional piece of repertoire in Odissi was a welcome effort both from the side of the disciple and the Guru. 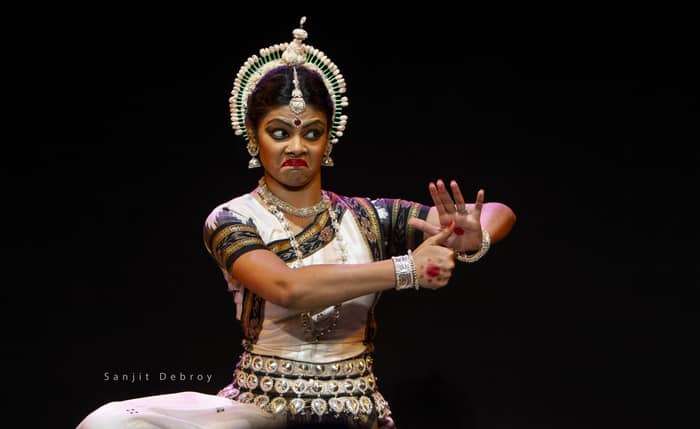 Nitisha continued her recital with a not so often presented Batu Nritya invoking the spirit of Batuk Bhairav. In raga Mohana and tala malika, the dance is injected with a series of sculpturesque poses depicting such actions as the playing of a Veena, Mardala (Drum), Cymbals (Manjira) and Flute, depicting the dance sculptures adorning the temples of Orissa.
A high point for Nitisha was her last presentation Aahe Nilau Sauilau. An Odiya abhinaya based on raga Pahadi triputa tala, this song is originally a bhajan written by Saalaubegau, a 17th century Oriya religious poet, who, because of his Muslim origin, was refused entry into the Puri Jagannath temple. A true devotee, he sat outside the temple, calling out to the Lord of the blue mountain- Aahe Nilau Sauilau, waiting to get a glance and pleading to the Lord to protect him. The poet refers to different stories, where the Lord took different forms to save his devotees. He starts with that of the King Elephant, who is saved from the scheming crocodile. Then he talks about Draupadi, who he saved from being dishonored. And, then about the devotee child Prahallad, where Lord Narsimha appears out of a pillar to kill his demon father Hiranyakashipu. With some brilliant lighting and apt amount of energies from the dancer, it was a perfect fit to be the first act of the evening. 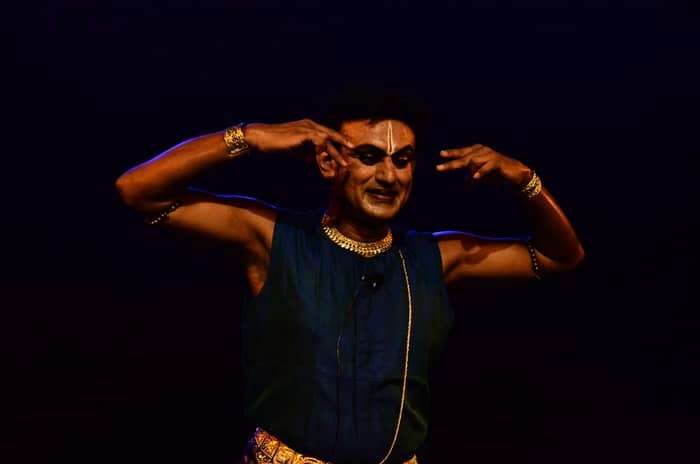 Dr Vasudevan’s avant-garde Bharatanatyam recital again was aptly placed to be the finale of this two days long festival. His presentation commenced with a traditional Mallari. A traditional invocation from the genre of Naadaswara melam of South Indian Temple tradition, it was a composition of Guru Sh. Sadasivam Shankar in raga Gambheera Naattai, set to Tala Misra Chaapu.
As his second piece, the dancer presented a verse from the “Kataaksha Shatakam”, from the celebrated work “Mooka Panchashati” (500 verses by a dumb saint) by Muka Shankara from around 5th century. It was a sheer treat to watch Dr Vasudevan not just dance but sing the following verses too, reminding the audience of his talents of being a trained carnatic vocalist as well:
Maatah Kshanam Snapaya Maam Tava Veekshanena
Mandaakhsitena Sujanair Aparokshitena |
Kamakshi Karma Timirotkara Bhaskarena
Shreyaskarena Madhupadyuti Taskarena ||
Vasudevan’s interpretation to the above verse described the devotee pleading Mother Goddess Kamakshi to bathe him with her single glance and a wink of her tender lotus like eyes. One whose eyes are always engaged in the dual work of adjudging her child’s deeds (Karma) where all the evil karmas are bedevilled through her scorching Sun like eye and on the other hand the other eye is engaged in the showering the devotee with compassion and mercy as cool as the Moon. 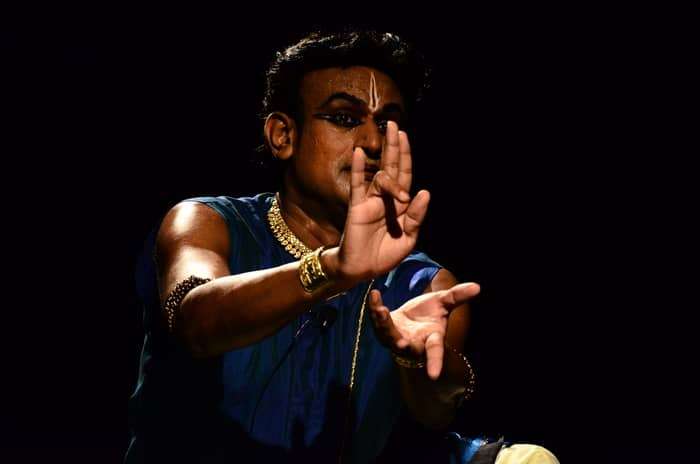 This was followed by a Swarajati Amba Kaamaakshi, a celebrated composition of Sri Shyama Shaastrigal, where the devotee dialogues with his revered Mother Goddess Kamakshi, who is the Supreme Energy and the cause for the cycle of Creation Protection and Dissolution. The devotee tries various ways to plead her and compares his humble devotion and love for her with that of the Trinity and others. The dancer’s languid and intense treatment of all his pieces, it was a delight to watch this old world charm unfurl. And fell the curtains on a well curated evening of dance and music.
PIC CREDIT- SANJIT DEBROY

Wari: Stories from the page of life

British realist painter on his craft

Remembering Gandhi and others legends