If an art commune conjures up images of big ticket exhibitions, panel discussions, waves of visitors and art critics spilling out of gallery spaces, Cholamandal Artists’ Village offers a different vision. Lying in the heart of Injambakkam village, Cholamandal is 10km south of Chennai’s Adyar River and ditches the usual fanfare characterising marquee art camps and residencies. Rather, the idyllic commune, set up in 1966 by artists of the Madras Art Movement (MAM), who were at the forefront of the modern art style in southern India, is a destination where silence is a takeaway.
The village celebrates the impact of MAM on the Indian art canvas in a meaningful way. A series of artworks, installations, photographs and sculptures, displayed seamlessly across outdoor and indoor spaces, illustrates the sweep and scope of MAM, which has its origins in the 1960s arts milieu of Chennai. 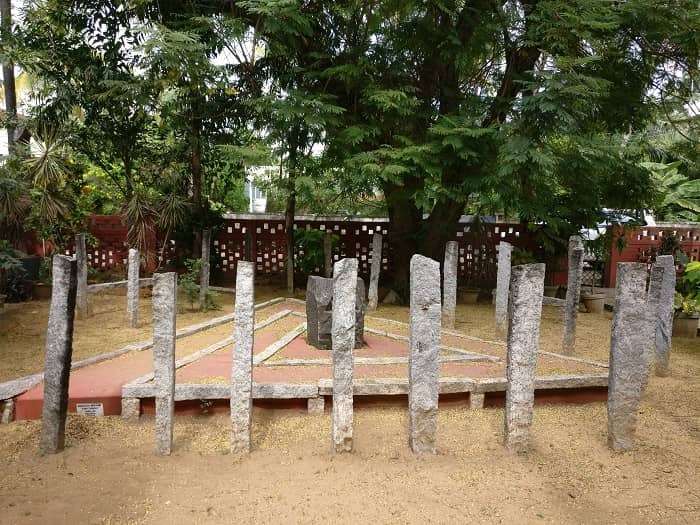 The context in which the movement brewed and took shape is also inextricably linked to the formation of the Cholamandal Artists’ Village. Post India’s independence in 1947, the need to carve out an original niche for Indian artists was an existential reality. The seeds of the movement were sown when artist Devi Prasad Roy Chowdhury took charge of the Madras School of Arts and Crafts as principal in 1930 and drafted the school’s fine arts curriculum. The regional artistic journey took on a bold form and spread its wings under K.C.S. Paniker, who took on the reins of the Art School between 1957 and1966.
It was Paniker’s students at the school who came together to explore a new art idiom that will aggressively engage with the vernacular art of the region and yet be contemporary in its appeal to global art connoisseurs. Thus was formed MAM, with a backbone of traditional imagery and a sharp focus on the line. Two primary styles that this southern art movement aligns itself with are figurative and abstract, with modernity defining its spirit. The leading lights credited with initiating a dialogue with traditional art in MAM are K.C.S. Paniker in painting and S. Dhanapal in sculpture. 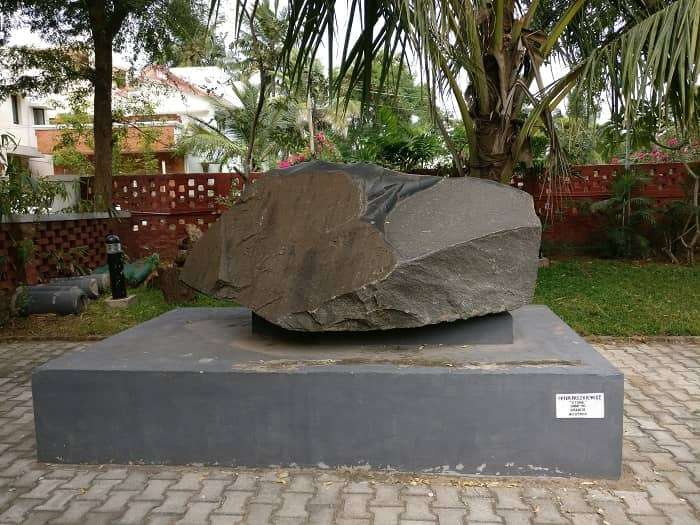 The same spirit of originality and inventiveness which led to the birth of MAM pushed Paniker to set up the Cholamandal Artists’ Village in 1966, where his students and a few artists associated with the Madras School of Arts and Crafts set up home. The commune’s moniker is a hat tip to the Chola dynasty, which patronised arts in a big way. The coastal landscape of Injambakkam offered the perfect refuge to artists who were all set to start a new journey without commercial constraints. Not only did the success of the commune create opportunities for international showcase for the residing artists, global sculptors and painters took up residencies here to exhibit their creations.
Today, a gigantic banyan tree anchors this creative space, and its galleries shine the spotlight on works of important artists of the MAM, including Paniker, SG Vasudev, M Senathipathi and S Nandagopal. The lush greenery of the commune also comes alive with sculptures by a smattering of both international and Indian artists. 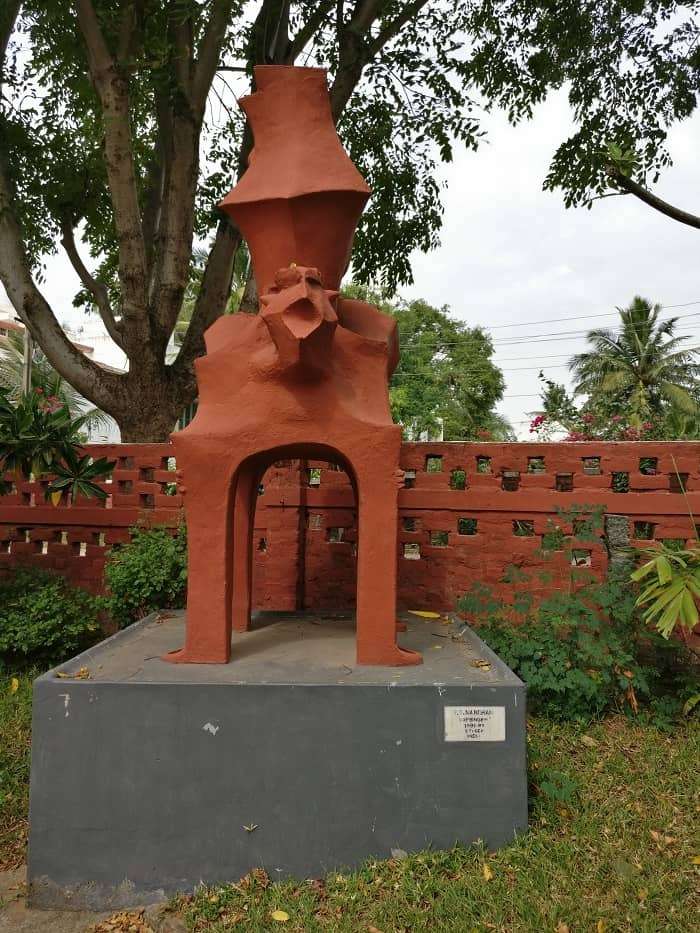 A concrete sculpture titled Head by Japanese sculptor Suichi Tadani, right at the entrance of Cholamandal Centre For Contemporary Art, one of the gallery spaces, is stark in its contours, depicting an expressionless identity. Another granite work titled Group by C. Dakshinamoorthy, a core member of MAM and often referred to as ‘master of stone,’ graces the outdoor space.  Noted for a distinct southern Indian flavour in his works, Dakshinamoorthy’s Group showcases an array of human figures huddled together with exaggerated local features. The sculpture also echoes Dakshinamoorthy’s artistry over the female form, a motif that dominates his oeuvre. Simplicity happens to be the hallmark of Group, and like most of his celebrated works, this too is a study of an assembly of women.
Another equally dramatic sculpture inside the Cholamandal premises is a red stucco work by P. S. Nandhan, titled Harbinger. Possessing clean lines and a bold colour, the piece reflects Nandhan’s observation of the environment and how it has impacted his creativity. Recipient of the National Award by the Lalit Kala Academy, New Delhi in 1992, Nandhan’s sculptures, mostly in metal, stone and terracotta, are a contemplative study of nature and draws heavily from folk sculptures. 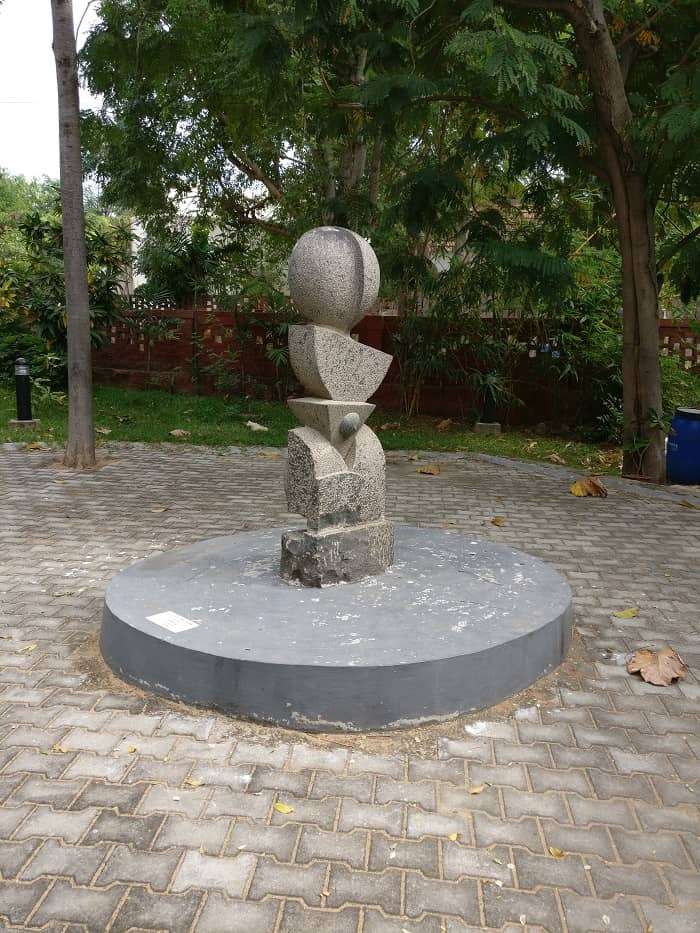 The attempt to spin a story from various art narratives is visible across the village. If the MAM artists leave a deep imprint on the visitor, so do a bevy of international sculptors and painters. For instance, a granite work by Japanese sculptor Hiroshi Mikami, titled Emptiness, is beautifully outlined by a series of trees.  A set of triangles and straight granite pillars, Emptiness is inspired by the Zen philosophy and astounds with its symmetry and precision.
Clearly, Cholamandal has come a long way from its heady days. But its galleries and of course, the banyan tree stand as reminders of its artistic past. 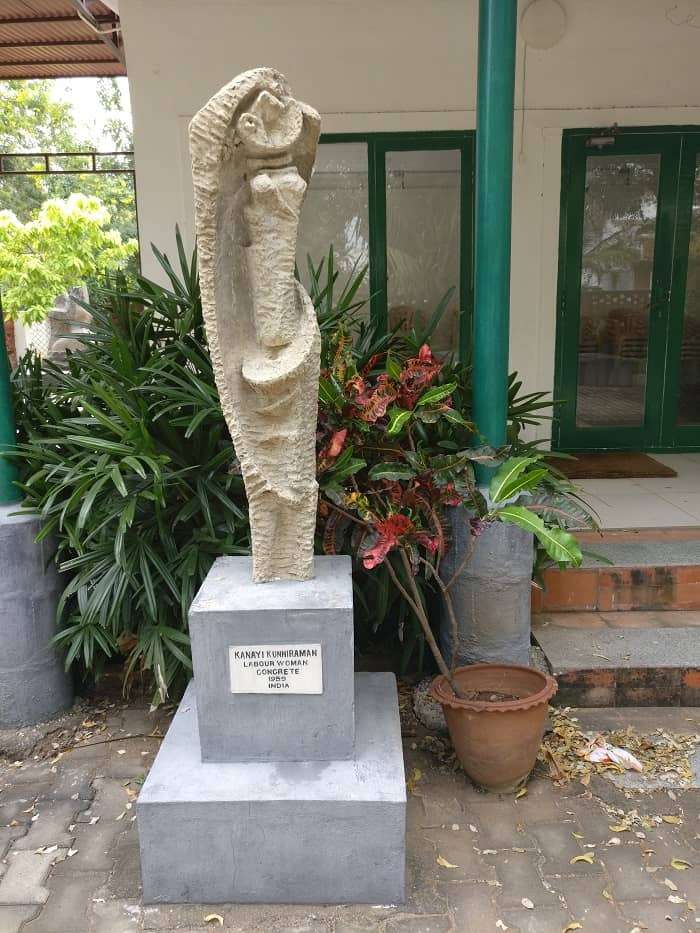 An exhibition on contemporary architecture