Far from the hullabaloo of city life, product and interior designer Vikram Goyal has created a jewel in the picturesque village of Moira in Goa. Reflecting the superior creative aesthetics of its maker, it’s a holiday nest where art and design come together to form a glorious alchemy. 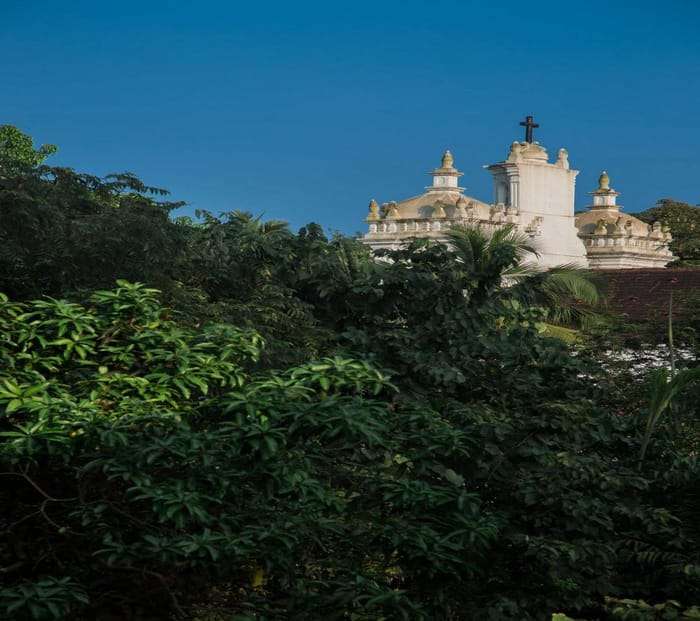 View from Vikram’s home of the pristine white church

In his essay, ‘The Wise Fools of Moira’, Professor Lucio Rodrigues writes, “Moira is a beautiful village in the Taluka of Bardez, in the tiny western state of India, Goa. The village is famous for many things, among others for its banana plantations, which yield big, long bananas, called munnouchinz kellim in Konkani, and each fruit is equal to a square meal… But the bananas are not Moira’s chief claim to fame among Goan villages. The people are as famous, if not more for their kellim, so famous indeed that they have passed into simile and proverb and legend. They are among the most industrious people of Goa…” 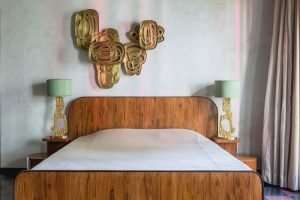 Minimalist yet beautiful, the design is unique in this home

This cozy hamlet of wise fools is a stunning locale. Pristine, verdure and tranquil with the old Moira Church forming the nerve centre. No wonder, an artist as evolved as Vikram Goyal chose this beautiful landscape to conceptualise a home here. But this is no normal home. The building is a marvel of sorts, an expansive canvas to showcase its creator’s superior design aesthetics. The man who is the brain behind the internationally renowned design atelier Viya Home, has been known for his product and interior design creating exquisite pieces and spaces using the superior indigenous craftsmanship of Indian artisans. But Vikram’s work is hardly Indian in look and feel. That is the very basis of Viya Home’s design vocabulary. It celebrates the heart of Indian workmanship through a global approach. 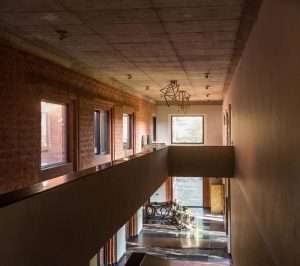 Corridors add beauty and enigma to the place

Moira by the Church is an award-winning two level 710 sq m bungalow built 1,297 sq m plot. The houseoverlooks the charming Moira church on one side and a pretty Shiv temple on the other. The lush paddy fields further soothe the eyes as you look around. 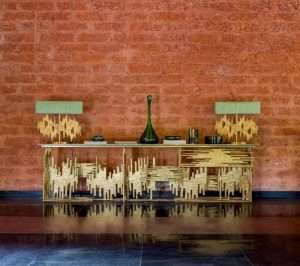 The beauty of the property is enhanced by its modernist architecture. “We used local materials because the house should be one with the place it is built in. We tried an innovative inclusion of laterite in the construction, interiors and landscape. The textured surfaces give it a rustic and earthy feel and the exposed, concrete ceilings gives it that expansive look,” says the design maestro. 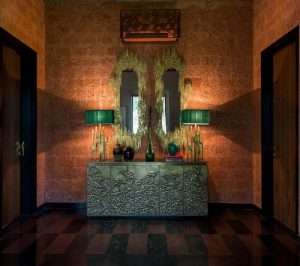 The interiors are dotted with custom-made sculptural pieces from Viya Home, which play around with original art-deco and antique Goan-Portuguese furniture. The house, an art work in itself, has won several laurels, including the All India Stone Architectural Award for landscaping in 2016 and the Commendation of Italian Dedalo Minosse International Prize for Architecture and Design. 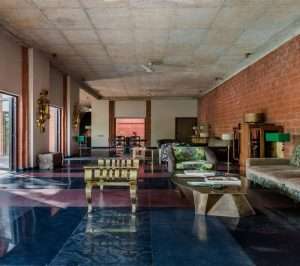 The surface of the house is rugged and the walls are made of exposed laterite—a local Goan stone that is rust-coloured, like terracotta, which is contrasted with the masculine luxury of the rest of the nest. The colour scheme inside, used in the upholstery or objects, revolves around hues of beaten gold, khaki, brown and black. 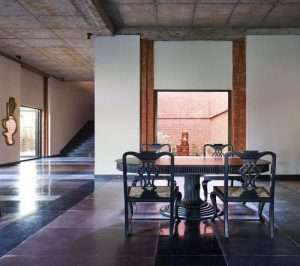 The place is expansive with high ceilings and broad spaces

Enough said then. Come let’s take a walk through this piece de resistance. 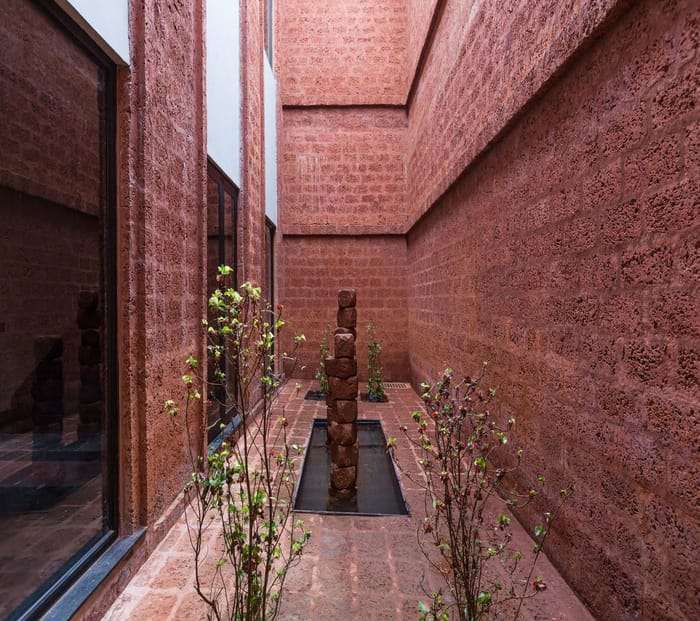 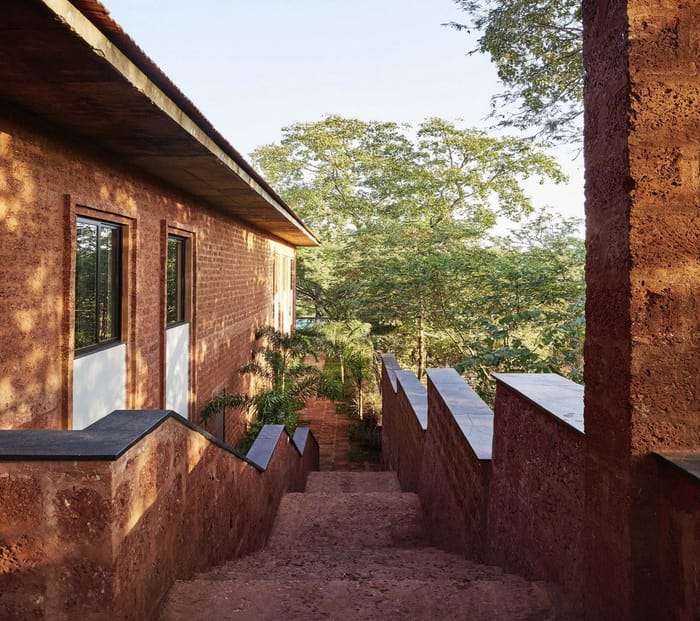 Staircases that are strong yet simple 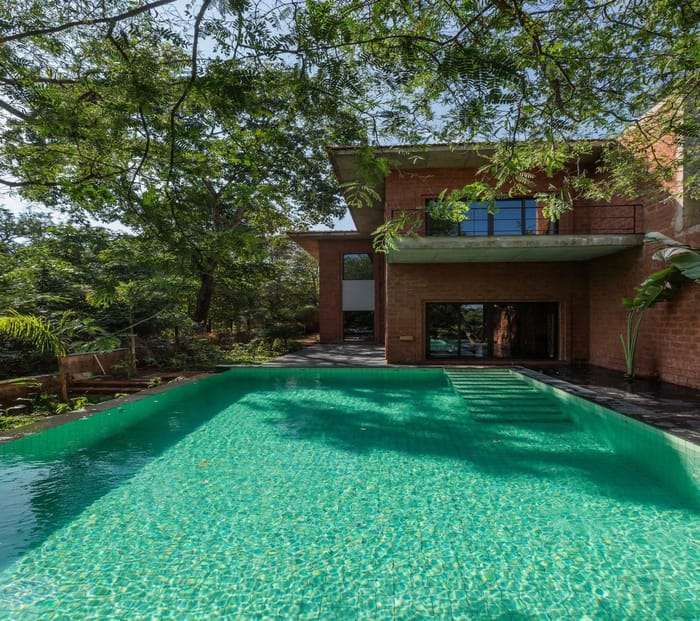 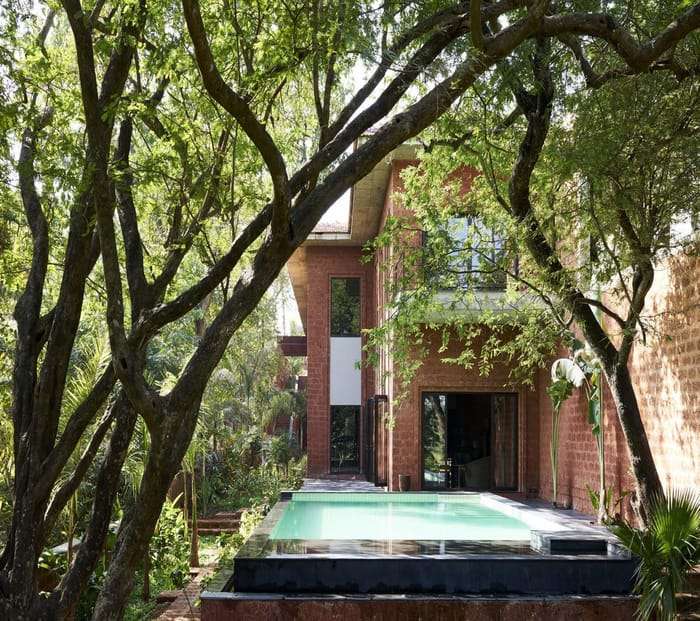 The foliage matches the green of the pool 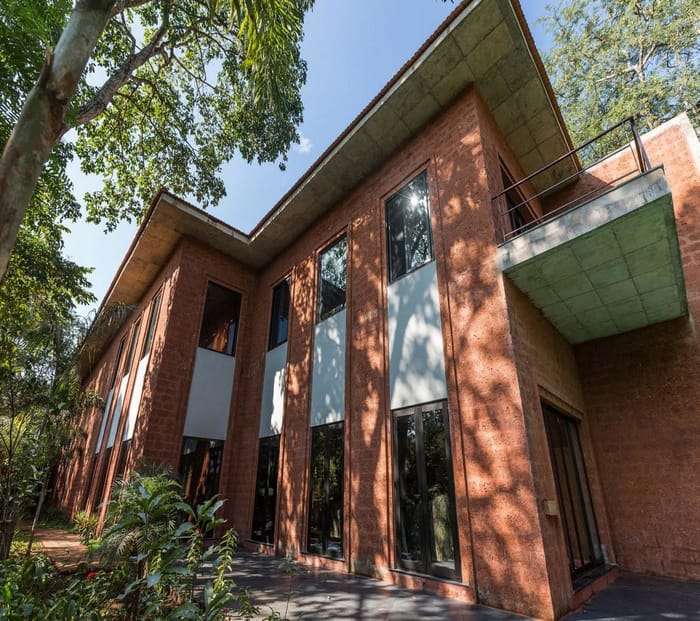 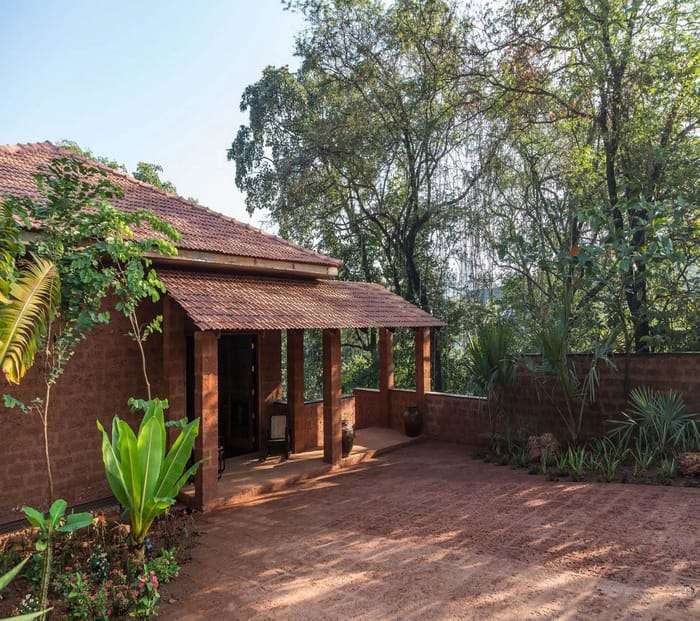 The exterior is simple, quaint and showcases a rustic elegance