The History of Indian Art: From Caves

by Lisa Sahgal 0 comment
The history of Indian Art is an extremely relevant topic to discuss; but in no way simple, for we have culturally diverse art practices. Take Tribal Art, for instance. The Toda and Santhal tribes have evolved rather different art practices. One cannot describe the history of Indian Art as a linear path; it eventually breaks up into separate routes, telling separate stories independent of one another. So how do we explain the history of Indian Art? There are too many stories to tell. Fortunately, each of these stories has one origin.
So let us discuss the emergence of Indian Art from its beginning; the very beginning, where the path started out as one.
Cave Paintings. Yes, we are talking about the time before Civilisation. This era took place from the Ancient to the Medieval Periods. Cave paintings are found all over India, from the Himalayas to the South. Now, you may think that Cave paintings tell a small story: the story of how it started, but not where it progressed. This is incorrect. Cave Paintings actually tell a very important story on the emergence of Art all over the World.
What Pigments do you think people used on caves? Each pigment has colour, but in the Ancient Period, Paint as a medium wasn’t discovered until much later. More importantly, the paintings in each cave tells a different story. This acts as a documentation, telling the whole story; the emergence of Culture, and how it separated Society into communities.
Unfortunately, there is one setback: we can only speculate the exact date each cave painting was made, so we can’t really tell which was the first medium discovered to paint with. What we do know is that they initially used animal blood, dirt, charcoal, and other materials directly available to them. The most Ancient paintings typically depicted the repetitive story of humans as hunters. Such paintings are found in places like the Bhimbetka Cave, Bhopal. 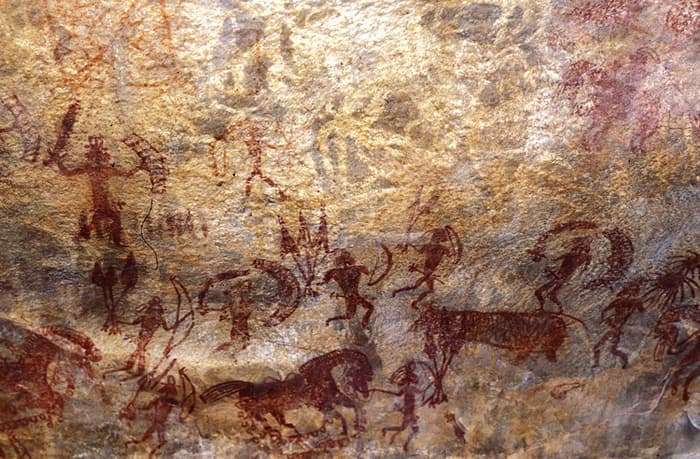 Around 4,000 BCE, farming settlements started to take place. This settlement eventually gave birth to our first Civilisation at the Indus Valley, called the City of Harappa. There are findings of ancient architecture, and slabs of stone with engravings of animals (seals), suggesting our development of language. What else does this tell us? That we developed the practice of engraving, which is also featured in caves. The Bhaja Caves at the valley of the Indrayani river was carved around 200 BC, representing Buddha. Now we start to see Religion in Indian Art, mainly Buddhism. These caves also depict the emergence of sculptures. More importantly, we see that caves are starting to be used as temples.
This is where the role of construction kicks in. Entrances, paths and stairways are artificially constructed, and stone is chipped away from the insides to make the cave bigger. The insides of the cave looks like the inside of a monumental building, now containing sculptures, engravings and paintings. The three rock – cut Hindu temples on the hillock of the Malayadipatti Village, Tamil Nadu were constructed around the 3rd– 4th Century AD, and are still active today. Over the centuries, these caves were improved upon. The Vishnu temple is covered with sculptures and reliefs, with paintings all over the walls and ceilings. The paintings are newer than the overall structure, dating back to around 16th Century AD. These paintings are a depiction of Vishnu in ten incarnations. 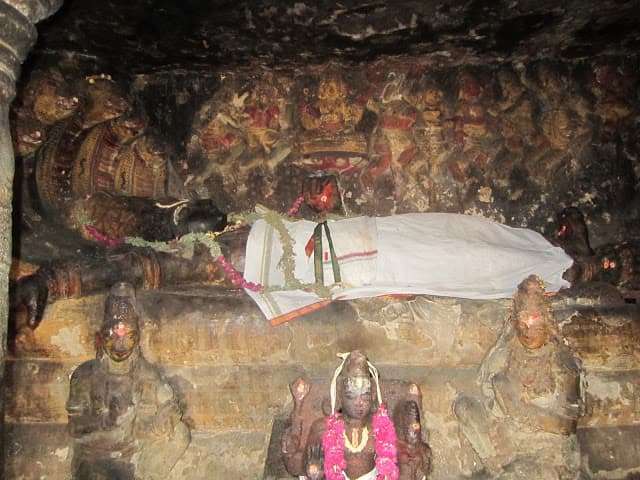 We have already figured out the evolution of some Indian art practices, along with religion and Culture, but the question on discovering paint pigments still remain a mystery. Fortunately, there are a few we know about. Indian Yellow was one such pigment widely used from the Fifteenth Century. It was made from the urine of cattle in Bihar, fed nothing but mango leaves and water. Though it resulted in vivid colour, the cruelty towards cattle led to the abolishment of this practice by the Eighteenth Century. A lot of other pigments were discovered through plants and flowers, and minerals from the soil, and rock, such as chalk.
As soon as paint pigments were discovered, Indian art burst into life with colour, and here the reasonably straight path broke into various routes to different art practices.

Too small a canvas? Have an entire wall!