Have you ever wondered what Indian Art was like before Western influences? When Canvas boards, brushes and paints weren’t available to us? We are familiar with cave paintings, but what about art that could be bought? Looking at Ancient Indian Art, we have already familiarised ourselves with sculptures and paintings for Monarchs, but we have not familiarised ourselves with art practices for the Middle Class communities.

Tribal Art is a great topic to focus on in this regard, for their practices are based entirely on the functioning of their communities.

A lot of tribes have evolved their art practices through the influences of Mughals and the British, but there are still some that follow their ancient practices entirely.

The Santhal Tribe is one such example. They use handmade paper as their canvas upon which they paint with natural colours from plants. Their livelihood is based on cultivation, and their entertainment is based on dancing and creating music. Their paintings represent their community as a happy one: showcasing their celebration for successful crop growth, depicting dancing figures, traditional musical equipment, and colour. Their paintings are remarkably realistic to look at, especially for a traditional art form. Other art practices involve jewellery making, and tool making for hunting. 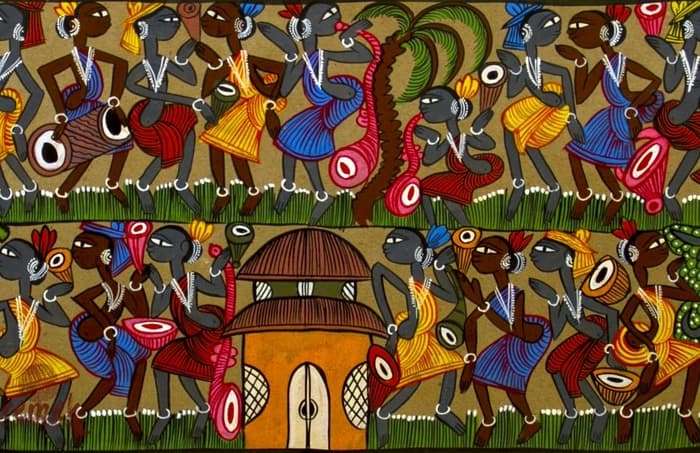 The Warli Tribe art forms are rather extraordinary, dating back to the Neolithic Age, around 2500 BC. Warli traditionally painted on their huts, made from red soil and cow dung. Unlike the Santhal tribe, they did not have access to handmade paper.

Their figures are very interesting to look at: they barely depict any features, just stick figures with triangular bodies. The males are represented by an upside – down triangle, depicting their broad shoulders and narrow waists. Women are represented by hour glass figures: two triangles, tips joining at their waists. The triangles and heads are always filled with pigment. One will not find a single Warli painting without a circle of dancing figures: the Circle is iconic to this tribe. The pigment used on their paintings are traditionally white, made from a mixture of rice paste, water and gum. The tool used for painting was initially a chewed bamboo stick.

Now, their painting practices have evolved, with the discovery of paint pigments and other art materials. Their paintings depict more colour, and are now used for fashion, product design, and other commercial practices. In short, their outlook has changed. Its purpose is no longer just decorative, but to generate income.

Though, there is one thing that hasn’t changed; their themes. Warli have always depicted their everyday life in their paintings, and they refuse to be influenced by the Urban lifestyle. In short, the lifestyle depicted by this tribe is more or less primitive. Rituals, festivals, weddings, are common themes explored by this tribe. 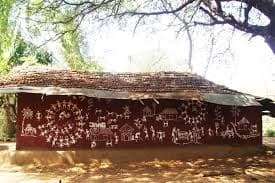 The Toda Tribe engage in two types of art practice, namely; embroidery, and rock mural painting. Their huts have a rather unusual appearance; rather igloo like, due to its small size and bent shape. These are constructed out of thatched bamboo, fastened with rattan. Thicker bamboo canes are placed on the roof as well as the frames, giving the hut its bent shape and making it firm. The entrance to their hut is made from stone or granite, upon which they paint their rock mural paintings.

The more important art practice is embroidery, for their entire livelihood depends on it. Toda have a rather distinguished style of dressing; a tri-colour shawl, typically red, black, and white. Their choice of colour is based on religion: Black is a depiction of the Underworld, Red depicts the intermediate realm of the Earth, and White represents the Toda Tribe. The patterns in these shawls are intrinsically woven, and are very similar to the tattoos the previous generations possessed. Apart from fabric, Toda also practice embroidery with straws for lamps and baskets. 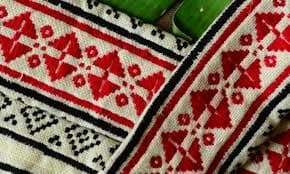 So now we have familiarised ourselves with primitive art practices for communities, and we have also learned that many practices have made their way to the Modern World. But why has tribal art become important to people outside the tribal Art? Because we are aware of this one truth: Our ancestors all had one way of life, primitive life, and through these art practices, we can watch our history unfold in front of our eyes.