Until a decade ago, charpai, the quintessential Indian cot or bed, was a ubiquitous object in many middle-class households, particularly in North India. That it could be transformed from being a spacious-seating arrangement to a comfortable bed by merely changing spatial settings that had made the multifunctional item a central character in many households. Perhaps, the culture still persists at homes in rural settings where the concepts of ‘furniture’ and ‘my space’ haven’t yet arrived.

These two concepts are the locus of Ayush Kasliwal’s ‘The Charpai’ project at the ongoing Serendipity Arts Festival. The exhibit explores charpai from a historical and cultural context, leading viewers through different makes and weaves of the Indian cot, besides displaying designer and chic variants of the humble item that is particularly used in the dry and arid regions of Rajasthan, Gujarat and Maharashtra. 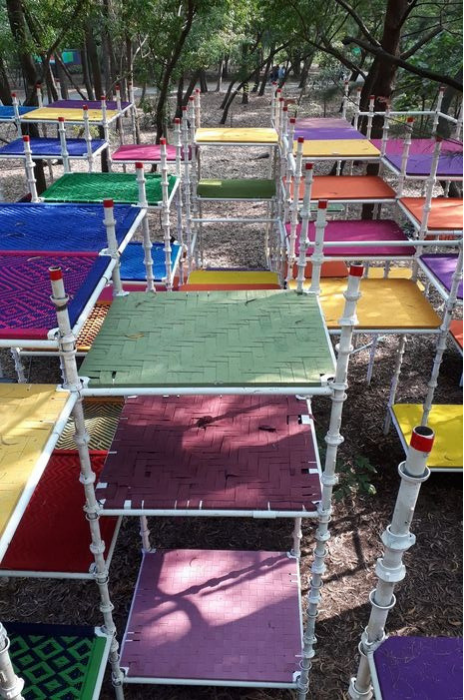 “Charpai is even more relevant today than it ever was,” says Ayush, co-founder of AKFD, adding that a few years ago people didn’t have rooms defined by names. “There was no concept of ‘my room’. With ‘my space’ came the idea of my furniture, and then we started divided rooms as living and dining spaces… and so on. But let’s go back a little and see how it was then. Families would sit together and the charpai would double up as a bed, dining table or even as a sofa. It was the flexibility of the item that made it a ubiquitous object. But now, with boundaries drawn and spaces demarcated, we accumulate ‘static’ furniture.”
So while Ayush’s project reimagines and reinterprets charpai to the audience, many of whom, he claims have seen it for the first time, the Jaipur-based designer hopes the display opens doors for a larger discussion on the nature of consumption. “Can I make social commentary through this project? That basically is the overarching question. We all have become slaves to a never-ending chain of consumption. From a bed to a mattress, and from one air conditioner to one in every room, we don’t realise where we all are heading. Basically, I feel that we don’t question things that cause us inconvenience,” he says.

“Our search for bigger spaces, homes and the idea of how much we need are in a dire need to be re-examined. Traditionally, Indian society has been extremely frugal in nature. What we are doing now is throwing away our identity and culture. These narratives need to be changed,” adds the Jaipur-based designer.
The project might be a small step in that direction, but the hand-woven charpais, chairs and a bed in metal are grabbing eyeballs at the Festival and so is an open-air installation at the Art Park where both children and parents climb up and down the maze of the four-legged cots. The 2.0 version of charpai has arrived, at least, in Goa. 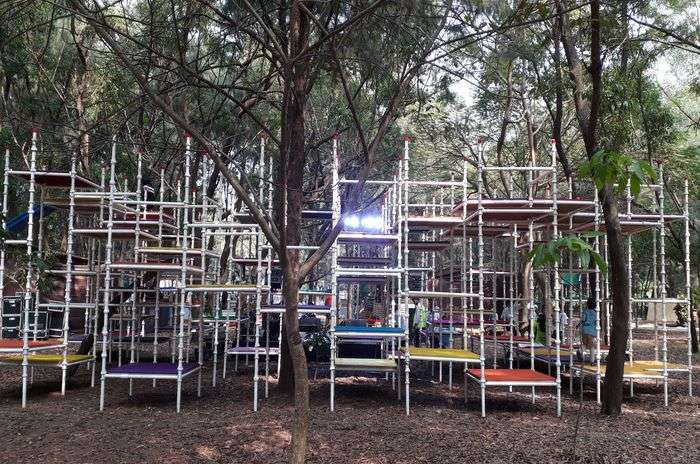 But what is interesting is that Ayush’s dream of ‘finishing the charpai’ project took almost two decades to fructify. “Well, in 1998, I worked with Urmul, milk federation in Bikaner on a project of teaching their people the craft of weaving a charpai. But once the project got over, I realised that a lot more could be done with it. In my mind, it was always a viable enterprise. But somehow, I couldn’t do it.”
Then, a few months ago, founder of the Serendipity Arts Foundation Sunil Kant Munjal called him to curate a section. Ayush shared two proposals with him and the Charpai was selected. Then he selected a small village Boogdi in Bikaner, where his curatorial assistant Ramayudh Sahu worked closely with craftsman Hem Singh for two weeks. Eventually, the project got bigger and ambitious to find a suitable space inside Adil Shah Palace and at Art Park.
The charpai is once again reclaiming its rightful place in our conversation and perhaps someday in our drawing rooms.