Van Gogh’s Bedrooms exhibition at the Art Institute of Chicago brought all three versions of The Bedrooms together for the first time in North America. The exhibition was on view from February 14 th to May 10 th and saw record breaking attendance. Van Gogh was always searching for a place he could call home and the closest he came to finding it was his beloved “Yellow House” in Arles. In this short life span of 37 years he lived in 37 different locations across 24 cities.
“The Bedroom”: the first version was borrowed from the Van Gogh Museum; the second is part of the Art Institute’s permanent collection since 1926 and the smaller third painting was borrowed from the galleries of the Musee d’Orsay, in Paris. Even though the highlight of the exhibition were the three versions of The Bedroom, the exhibition featured several other important works of Van Gogh including some of his early sketches.
The exhibition consisted of 36 works, including paintings, drawings, books and illustrated letters. The entire experience was very interactive and was divided into different rooms with themes. It started with a reconstruction of Van Gogh’s bedroom in “the Yellow House”, visitors could stand near the chimney area and see the room from Van Gogh’s perspective, the place where he sat and painted the first version of The Bedroom.
In the next part of the exhibition viewer’s could trace Van Gogh’s nomadic life. They were taken on a journey through 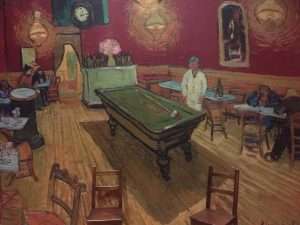 this timeline; the 37 different places where he lived were mapped on a wall, from his birth in his parent’s parsonage in 1853 to his final resting place in Auvers-sur- Oise in 1890. Through out the exhibition accompanying the works were excerpts from Van Gogh’s letters to his brother Theo, giving us a small glimpse of his universe.
One of the rooms was inspired by Van Gogh’s famous oil painting The Night Café where visitors could sit down and take in the beautiful artwork surrounding them. Before seeing the actual Bedroom paintings there was a video installation that explained the three paintings in detail, from the different techniques and color used in each. Van Gogh painted the first version during mid October 1888 shortly after moving into his “Yellow House” in Arles. He described the painting in a letter to his brother Theo. However, the painting suffered from water damage due to flooding in his room. He made the other two versions to preserve the composition at the asylum in Saint- Remy in 1889. The smaller version of the two was a present for his mother and sister.
The entire experience was very engaging and it was a once in a lifetime chance to see all the three versions of “The Bedroom” together as it is extremely rare for the exhibitions to loan these paintings. 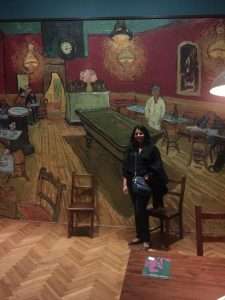 About the author:
Megha Ghildiyal is a communications professional with expertise in lifestyle & luxury brand marketing. She is currently a graduate student at Northwestern University pursuing her master’s in Integrated Marketing Communications. She lives in Chicago with her husband and two-year old son. She loves traveling and learning about different cultures.

Art is a therapy for me – Pallav Chander