As the 58th edition of Venice Biennale opens to public on May 11, 2019, the India Pavilion — marking its attendance after a gap of eight years — would showcase varied facets of the Gandhian philosophy through selected works of seven Indian modern and contemporary artists. Their works may not be a direct iteration of the philosophy of Mohandas Karamchand Gandhi but they largely fit into the theme of India Pavilion— Our Time for a Future Caring which corresponds to the overarching theme of the Biennale — May You Live in Interesting Times that seeks response from the art community on the current political climate.

Going by the dominant theme, it is befitting for India to celebrate the emblem of non-violence and the icon of India’s struggle for independence on such a global scale, and use artistic language to propagate his ideas of peace and love across the world. 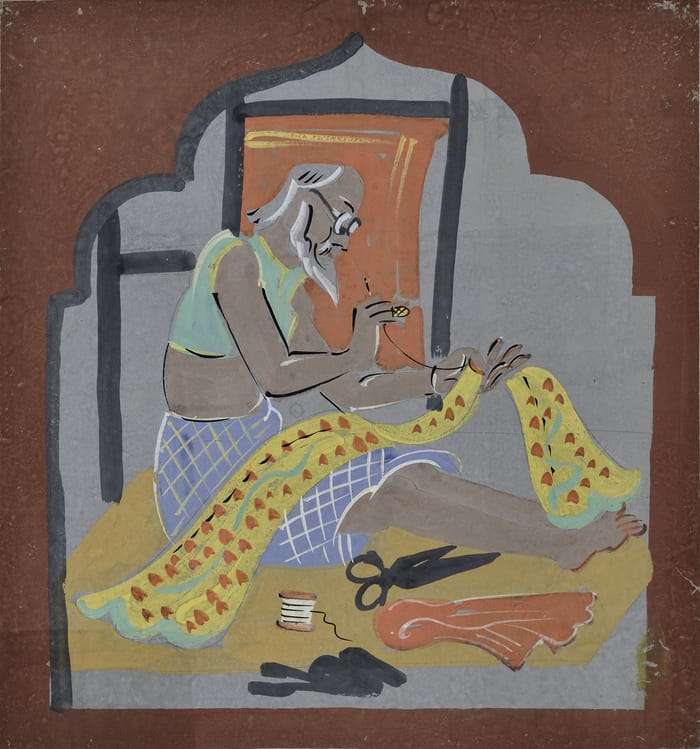 One can begin with Covering Letter, an immersive installation and video projection by one of India’s prominent contemporary artist Jitish Kallat. Projected onto a traversable curtain of cascading fog, this work presents a historical letter by Mahatma Gandhi to Adolf Hitler, written just weeks before the start of World War II. The work has been showcased world over, even once in Paris. But in Jitish’s words, “Biennale would be its most prominent outing in Europe”.

Elaborating on the work, Jitish says, “At the centre of this work is the viewer. Every visitor brings in different personal, social and historical experiences to the work, in a way altering its meaning. To illustrate, just two days prior to the work being exhibited at the Philadelphia Museum of Art, Donald Trump was voted to power at the end of a very toxic and divisive election. This development completely altered the reading of Covering Letter. I often can say that Gandhi’s words to Hitler seem equally addressed to anyone, at any given point in time as it allows one to self-reflect and introspect.” 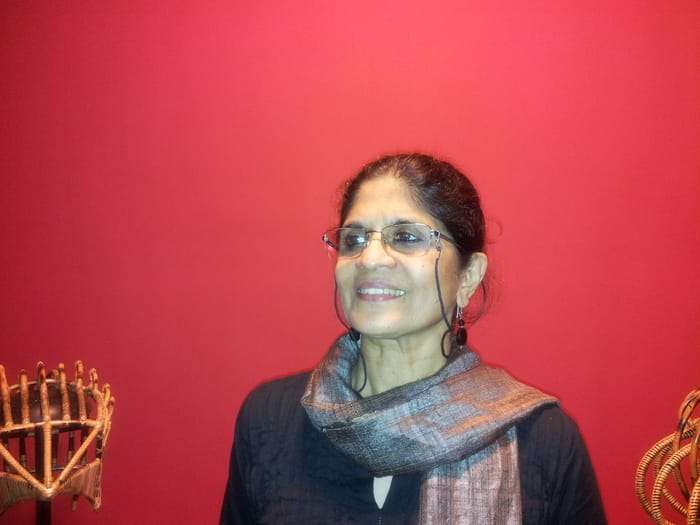 While this work offers a direct reference to Gandhi’s belief in non-violence, Mumbai-based Shakuntala Kulkarni’s offerings reflect a subtle but deeper representation of Gandhi’s ideology. Shakuntala is best known as a multidisciplinary artist who is primarily concerned with the plight of women and their safety. Her works have often dwelled into the idea of breaking away from the concept of deep-seated patriarchy so that a woman enjoys her fundamental right of expression. So when her popular cane armours, along with certain artefacts and accessories and seven paintings would be displayed at the Biennale, a viewer might initially be flummoxed to connect them with the strands of peace and non-violence. While the issue of women safety in public places, which her cane armours present, indeed resonates with the ‘idea of safety and peace’, it is only when one knows about her work-relation with her craftsmen, one realises how remarkably she is breaking the “barriers of hierarchy”. 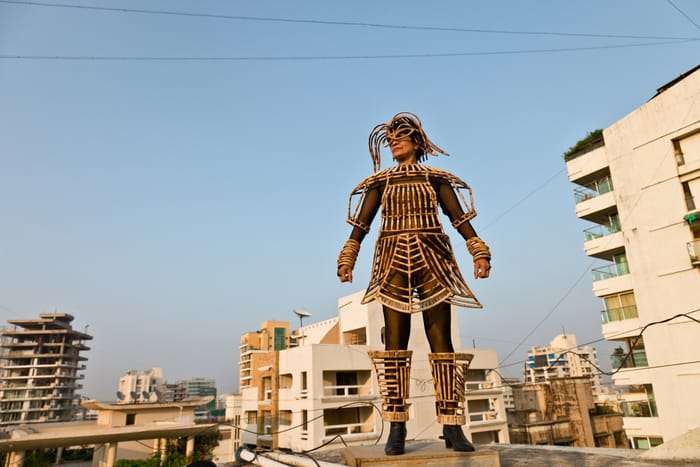 “Gandhiji was a believer in dissolving hierarchies that seep into our lives through the system of caste, colour, and creed, and even work hierarchies. But I don’t believe in any of this. To illustrate, I will not take complete credit for making these cane armours. I work closely with two people who come from different backgrounds. One was Dinesh Pardesi… he passed away recently. He always considered himself a labour because he thought that the work defines him. The other guy is Tankeshwari Bari, who helps me in weaving. You won’t believe how much time it took me to empower them… to make them feel that we all were a part of one team… there was no other… just us,” she says. 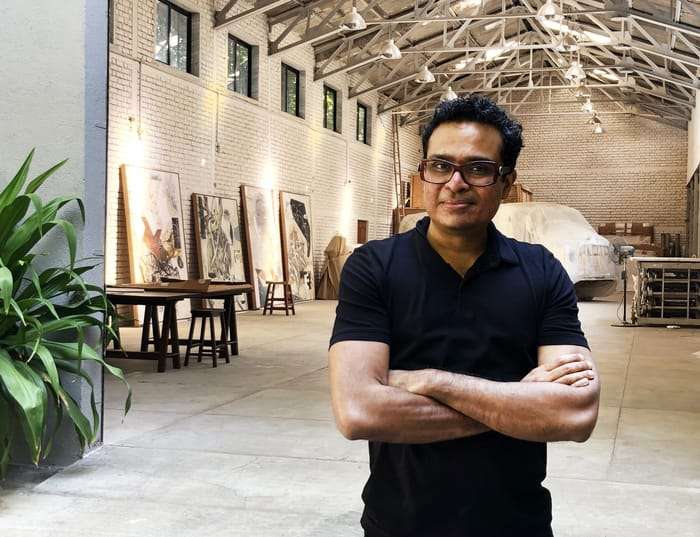 If Shakuntala bridged the gap by learning to negotiate with her craftsmen, Delhi-based Ashim Purkayastha has been promoting the concept of ‘questioning’ the authority. He had shaken the status quo when in his 2002 series Gandhi Man without Specs he subtly asked why should people refrain from questioning revered leaders, such as ‘Father of the Nation’. The idea, he says, had stemmed from his personal experiences of the indifferent treatment of successive Indian governments towards northeast. “The indifference towards us had made me question the very basis of having blind faith on icons.” While his famous stamp collection will travel to Venice, he also informs quite gleefully that one of his new work has also been selected for the Biennale. 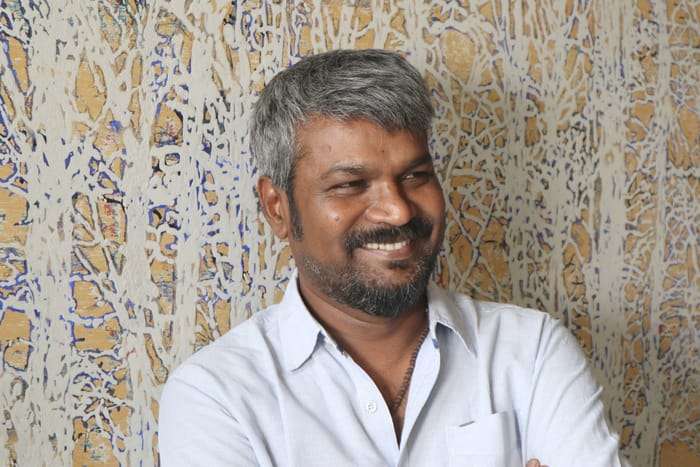 “Usually, a previously exhibited work goes for such festivals. But the curator liked the new work,” he says. The work he is referring to is a 6X16 feet installation titled Shelter’. Ashim has been collecting bricks, stones and broken pieces of marbles from different areas across Delhi since 2015. As the name suggests, he has used these materials to build a house-like work to represent migrants living in the metropolitan city that is overflowing with people. “That is how these people build their houses… brick by brick…from different materials just to have a shelter over them,” he says. 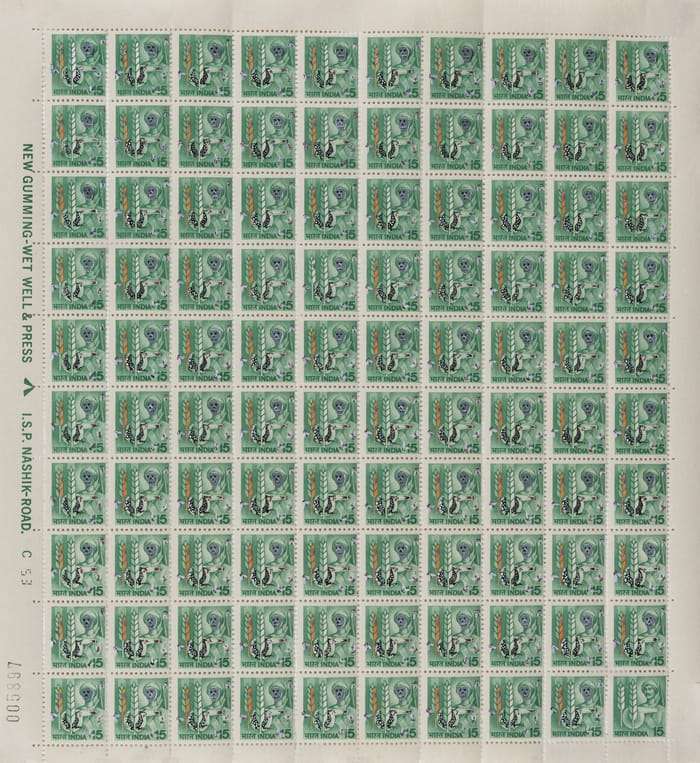 However, he has added twist to this narrative by wrapping these bricks in a rice paper and then painting them with a landmark or the name of the street from where they were picked. “It gives them an identity of sorts,” he says. In an increasingly polarised world where forced migration or internal movements of people is a norm, the idea of home has just remained a thought. The concept of longing and belonging is a perennial feeling nested deep in the closets of our hearts. His work leads to myriad interpretations, depending on how one sees it. 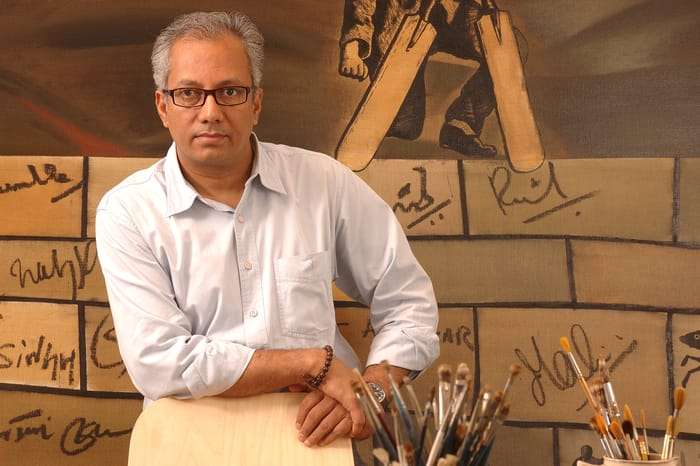 Other artists whose works would be displayed are ‘Haripura Panels’ by Nandalal Bose, Atul Dodiya’s Broken Branches and works by GR Iranna, Rummana Hussain.

(The project has been spearheaded by the India Ministry of Culture and co-organised with the Confederation of Indian Industry (CII). It is curated by the Kiran Nadar Museum of Art, the Pavilion’s Principal Partner; the Director General of the National Gallery of Modern Art is the Commissioner of the project.) 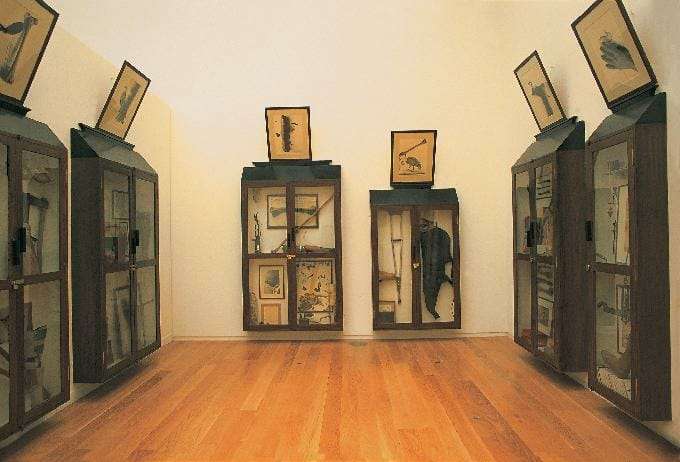 Manjari Chaturvedi’s Tribute to Begums and Baijis of Bollywood