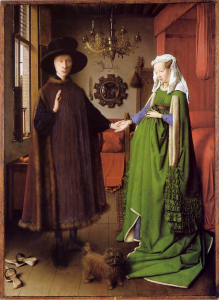 Jan van Eyck considered to be one of the most significant artists of the 15th century created an intriguing masterpiece in 1934. This Flemish painter known as the inventor of oil paintings still leaves us awestruck with the Arnolfini portrait.
Digging out meanings, interpreting the portrait, many names were given to it such  as – Arnolfini Wedding, The Arnolfini Marriage, the Portrait of Giovanni Arnolfini and his Wife, and so on.
Who were the Arnolfini’s? Isn’t it strange that a simple portrait of a man and a woman holding hands unveils certain complexities and realities of the time Jan van Eyck painted it.
Set in the background of a room, one can easily see a couple holding hands, a dog, a chandelier, windows, and so on. But the minutest details are mind boggling and takes one back on a cultural ride to the Van Eyck’s time.
Let’s take a stroll –

Other than the attire and lavish room, oranges depict their status too as they used to be a rare delicacy in those days. 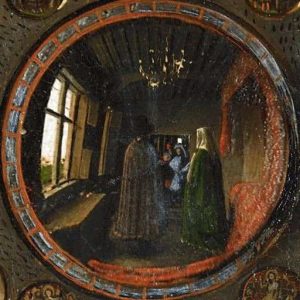 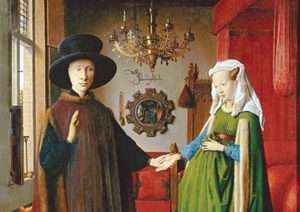 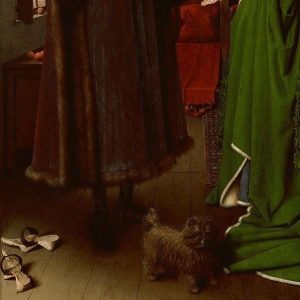 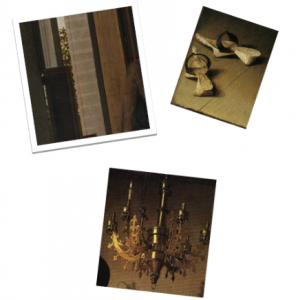 The portrait is significant because it looks so realistic that could be mistaken for a photograph. The portrait exhibits an extremely skilled use of oil colours. Jan Van Eyck was the first to reach perfection in this medium.
It is said that Jan used the technique of applying layer after layer of thin translucent glazes. The way he has brought realism and depth in portrait will always remain a mystery. The manner in which the artist signs his name on the painting is also one of the most talked about things. The signature in the painting reads ‘Jan van Eyck was here’. 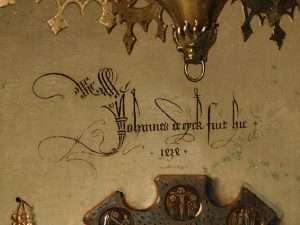 Playing with Geometry – A. Sreedharan