Pegged as an extraordinary sacred and historical musical journey, the annual World Sacred Spirit Festival, put together by the Mehrangarh Museum Trust, reached its crescendo in Jodhpur recently.
Planned as a finely-wrought necklace of musical sessions, and spread over atmospheric venues like Chokhelao Garden, Zenana Deodi Courtyard, Rao Jodha Desert Rock Park and Jaswant Thada, the World Sacred Spirit Festival saw a line-up of artistes both from the international world music circuit as well as the local performing arts scene. Currently in its 11th edition, the musical extravaganza began life in Nagaur’s Ahichatragarh fort in 2007, where practitioners of traditional music gathered to pay an ode to the fort’s Unesco Asia-Pacific Award of Excellence for Cultural Heritage Conservation.  The Nagaur edition continues till date and concludes just a few days before the grand musical spectacle at the Mehrangarh Fort.
It is to be kept in mind that the World Sacred Spirit Festival over the last decade has cemented its place in the festival itineraries of music aficionados across the globe. The last few years have seen powerful international acts including the Druk Yul Trio from The Kingdom of Bhutan, Li Daiguo, Pipa, Cello and Beatbox from China as well as the Stelios Petrakis quartet from Crete Islands, Greece. 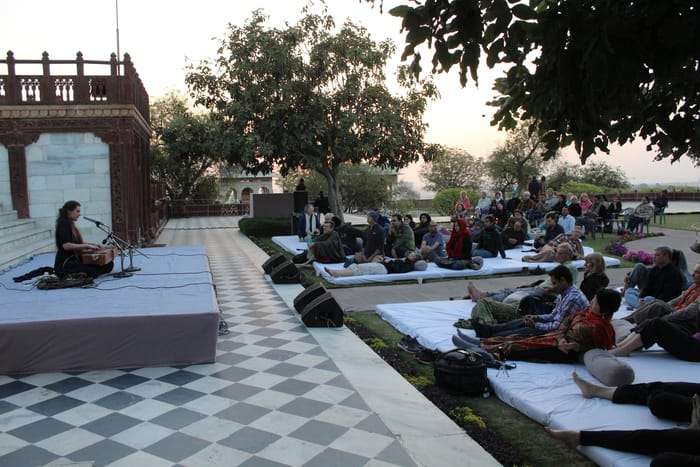 The divine musical journey this year was no different. More than two thousand people attended the musical extravaganza while several A-list artistes headlined it, including vocalist Zainab Afilal (known for Andalusian sufi songs) and Indian contemporary dancer Astad Deboo.  “Every year we try and bring a different focus to the programmes. The idea is to mix historical architecture and the story of the fort with very traditional music. At the same time, we try to have a new approach towards scenography and ways of presenting music,” said festival director Alain Weber. More than 150 artistes performed this year from nations like Lithuania, Morocco, Iran, France, Turkey, Armenia, Italy, Ethiopia and Algeria.
Most sessions scheduled at dawn and dusk, when the moon was just a fingernail in the sky, had Jaswant Thada Lake as their venue. Jaswant Thada Lake, 1km northeast of Mehrangarh Fort, overlooks the pristine marble memorial constructed in honour of Maharaja Jaswant Singh II. Watching the Iran-born Ariana Vafadari, croon meditative Gathas, the prayers of Zoroastrianism with Moroccan musician Haroun Teboul on the specialised flute called ney was a truly transporting experience at day’s end. The duo’s magical strains, against the backdrop of a placid lake teeming with birds, was a tidal wave whooshing in on an enraptured audience.
Evenings saw the arrival of the swish set, clad in the finest designer threads, along with international fans of world music. While waiting in queue to take the fort’s elevator to Zenana Deodi Courtyard, another grand venue of the festival, foreign attendees elaborated how the festival is now a pit stop on their global musical tour. Most held forth on the ways they planned to amplify the spirit of the festival at tribal music performances in Jaisalmer, their last destination. 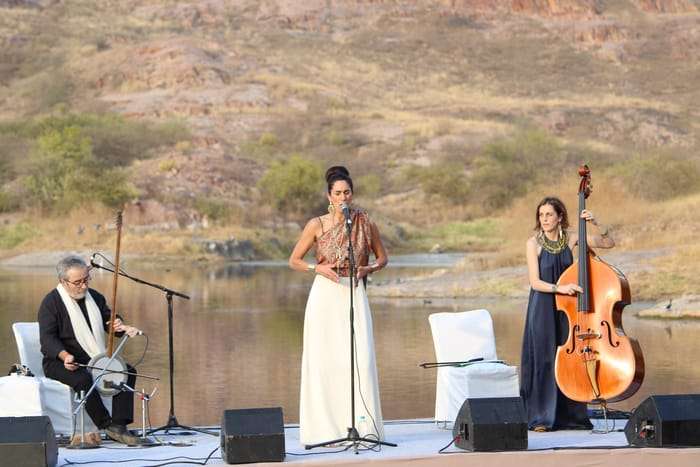 If the World Sacred Spirit Festival has managed to hold its own and has achieved genuinely iconic status in the global festival circuit, it’s because of its dynamic music collaborations. Explosive partnerships between musical troupes and artistes from regions as far-fetched as the Thar and the Sahara added both colour and spunk to the jamboree. Late one night, when the sky was draped in a twinkling yardage of stars, the combination of Imarhan Ensemble, an Algerian Tuareg desert rock sextet and Manganiyar tradition, featuring singer Gazi Khan Manganiyar, gave rise to a blistering performance. The flowing white kaftans of the Algerian musicians rose like spectres against a pitch-dark sky while the rainbow turban of Gazi Khan Manganiyar added to the drama on stage.
Audiences were struck by how cultural fissures were plugged by these collaborative ventures. In a session titled Songs from an Island,
Cuncordias & Elisa Marongiu, an ethno-musical group from Sardinia had their music seamlessly blending with the percussion sounds of the khartal by Gazi Khan Manganiyar and powerful voices of Kalbelia singers. The lush Chokhelao Garden, festooned with a white shamiana to keep the glaring sun at bay, saw guests reclining on mattresses and chairs, immersed in melodic sorcery. Earthen cups bearing fragrant tea and plates of samosa did the rounds of afternoon soirees while dinner was served under a star-lit canopy at Zenana Deodi.
Music seemed to be reverberating across all corners of the fort, even as audiences were taken on a flight to interesting sonic realms. So, when the World Sacred Spirit Festival came to a close on February 18, connoisseurs agreed on one thing —it really did paint a portrait of symphony and divinity.